The announcement Hong Kong Disnerds like myself have been waiting … and waiting for has FINALLY been announced. 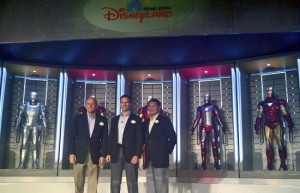 The next expansion for Hong Kong Disneyland will be an Ironman ride somewhere within Tomorrowland.

You can read the official announcement here.

Am I excited by the prospect of a new ride (that looks like it might be similar to the Transformers ride at Universal) where we get to soar over Hong Kong fighting big baddies? Hell YES!

Will we finally have a hi tech ride in Disneyland that will have people screaming for more, more, MORE? The rumours are the ride will be the likes of which we have never seen before. If it is anything as good as the Transformers ride then YES INDEEDY.

Am I getting my hopes too high? Probably.

The bad news is, it is only one ride and we have to wait until 2016 for it to open. ARGGH!

That’s at least 2 whole years.. the TORTURE! What are Disney going to keep us entertained with until then? A new parade would be nice…

I struggle to get my head around why Disney construct one ride areas in Hong Kong. Grizzly Gulch only has a roller coaster. Mystic Point only has one ride. And now Iron man will have one ride, a walk through area and a meet and greet area. Admittedly they seem to be advertising it as an extension to Tomorrowland … but one would hope it would be the start of a new land to embrace the Marvel characters.

I’m excited for it – I really am, but I just wish there was more to look forward to. As small as Toy Story Land is, the fact it has 3 rides to explore makes it a worthwhile trip down to the back of the park because despite the queues there is more than one thing to do there. It also encompasses a franchise my kids adore and want more of.

I understand there must be financial considerations, but until Hong Kong Disneyland has more diversity and excitement in terms of rides I worry about its ability to compete in the up and coming and competitive asian theme park market. Even if they were to add more of the mainstream rides that have always made the Disney brand great – Pirates of the Caribbean anyone? – it would help strengthen the market for Disney.

They have ample land around the park to expand into. I am certain their imagineers have the ideas and concepts ripe for development … the question is … when and what will they develop next?

Whatever the case, Iron man will be bringing the fight to Hong Kong and I sure hope I get to be there for the ride!