Dinosaurs. Who doesn’t love them.

They’ve been one of my passions since before I can remember and I still love reading, learning and exploring any information that I come across about them. So when one of my friends asked if I could make a dinosaur cake for her son I was elated.

What kind of dinosaur – Sauropod? Therapod? A specific species?

My friend was a little overwhelmed, but the fact her son adores dinosaurs as much as I do meant I soon had the answer – a Tyrannosaurus Rex.

Dinosaurs can be complicated beasties with a lot of interpretations to choose from. I decided to draw my own version of a Tyrannosaur. 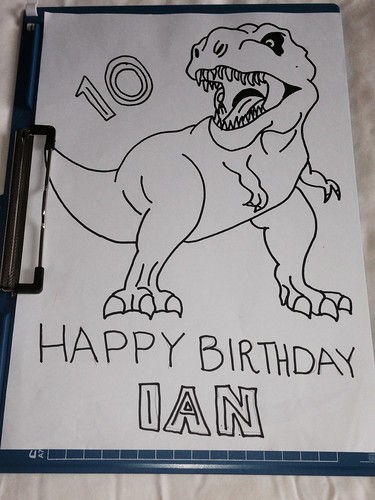 The intention was to come up with something that looked kind of realistic but that would be uncomplicated enough I could recreate it in icing. I like to draw and I consider working with icing just an extension of that. However I almost never go into a cake without a plan or drawing to work off. I created the image in pencil. Only when I was happy with it did I go over it in permanent marker. It serves two purposes. The first was to show my friend what I was thinking of creating to see if she was happy with it. The second was to use as a template to trace with piping gel to place on the cake. 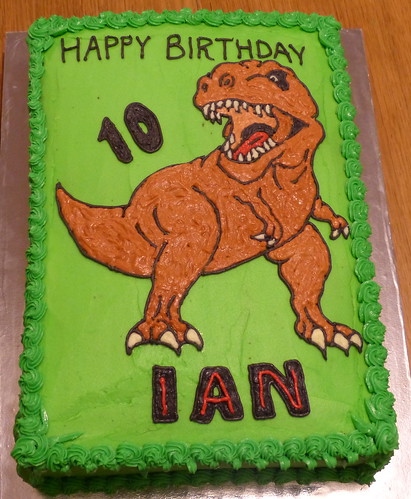 I was indecisive about the colours I used, resorting to Jurassic Park colouring for the T-Rex in the end. Instead of using a star fill pattern I decided to just fill the body to try and give a rough textured look to the Tyrannosaur. I discovered it was exactly what the birthday boy was hoping for and he was delighted when he saw his one of a kind dino cake. His little brother loved it so much he came up to me and asked for a green gigantosaurus cake for his birthday!

It is so worthwhile when you see the delight on a child’s face as they see their cake!