People back in Oz often tell me they could never live in Hong Kong because it has nowhere to explore, no natural environments to escape to.

I kind of hope through this blog I am changing that impression as I show that even this small densely populated metropolis does indeed have a natural environment worth embracing and exploring.

Today we’re going to take a brief walk through Hong Kong Wetland Park. This is an area in Yuen Long, deep within the New Territories of Hong Kong that the government has set aside and turned into a wetland park with the hope of encouraging the wildlife in Hong Kong to survive and as a means to educate people about the beauty and importance of the animals and plants in this region of the world. 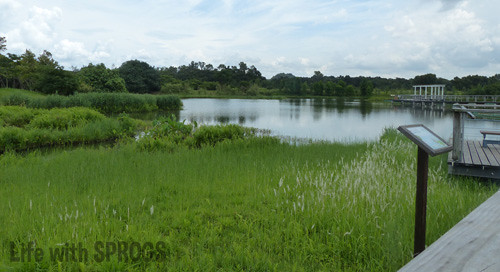 As you would expect of a wetland park it has vast expanses of wetlands to allow a variety of creatures to thrive. Most of the area has elevated wooden walkways that allow us to look down into the habitat without destroying it and for the most part offering minimal disturbance to it. Although it must be said when there are large tour groups out there as happened the day I was visiting your chance of seeing a diversity of animals the wetland park is known for is virtually impossible. 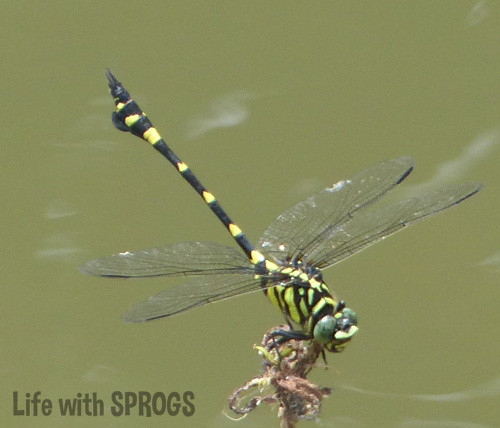 There are loads of insects. Something Hong Kong has a vast array of. This dragonfly was amazing in his yellow and black stripes. There is a section of the wetland where you can see a large number of butterflies as they flutter around you but my camera simply wasn’t fast enough to catch them this day.

The walkways give people a unique experience as a lot of the creatures you will find here are inter-tidal and live in the mudflats and mangroves. They are best seen when the tide goes down. 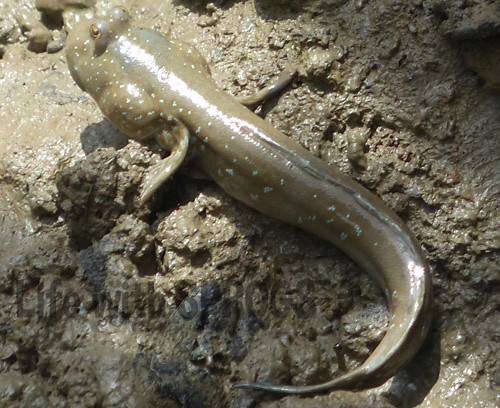 Mudskippers flopped around in abundance. I was impressed with how many there were, not to mention the size they grow to. I also found the pattern on their skin intriguing. Who’d’ve thought a seemingly boring mudskipper could have flecks of translucency? I’d never noticed it before… 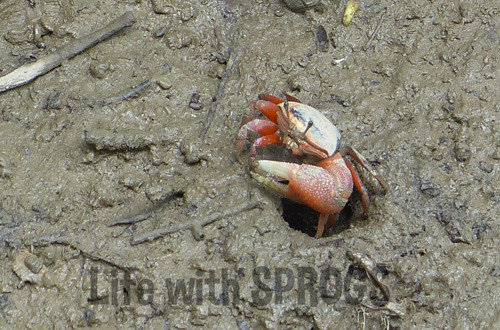 Hanging around with the mudskippers were small but active crabs. Small meaning you wouldn’t bother eating them size. They were certainly large enough that anyone could watch them shuffling around on the mud. Occasionally they would have a bit of a lash at a mudskipper flopping in their way; a bit of brutal natured fun. 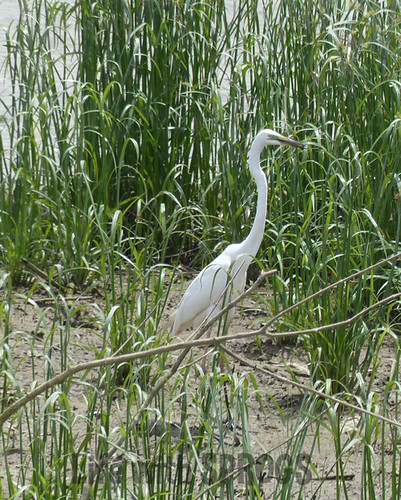 In another part of the wetlands “hides” exist where you can watch the birdlife roam around catching fish without them seeing you. Unfortunately the birds I had really hoped to see – the Spoonbills – weren’t around the day I was there. This lone egret was though. He was having a fabulous time fishing for his lunch quite successfully. One thing to remember about these bird watching areas is you need to be quiet as well. Just because an animal can’t see you, doesn’t mean they can’t hear you … something on the day I was there the tour groups we encountered had forgotten.

As well as a roam around the outdoor area there are a couple of indoor (air conditioned – YAY!) galleries with various displays. Some highlight animals and ecosystems while others address human impact on the environment. Most have some interactive displays that children can play with.

Surprisingly there are yet more animals to be found in the galleries. Granted, some aren’t “alive” however there were several aquarium tanks with fish and alligators (although I think they were actually caiman) you could get quite close to. It is a nice way to show the ecosystem below the water that can’t be seen.

The wetlands aren’t large and can be easily done in 1/2 a day. Due to the nature of the environment and the type of people you encounter out there at the time you might see more creatures … or if you happen to have a lot of noisy tour groups as I did … less creatures than you would hope for.

It is quite sweltering in the summer heat, so if you do insist on visiting in Summer you’ll need plenty of fluids to drink as you wander around. The wetland park does have a cafe and some vending machines for a limited selection of food and drink.

This is a great place to bring the kids, although you will have to supervise them closely on many of the walkways as most don’t have barriers on the side. After the kids have explored the wetlands there is a forest playground they can burn off any excess energy in while mum or dad has a cold drink.

Planning Tip: Plan to be there when the tide is out so you can see the mudskippers.

Due to its location it isn’t as simple to get to as other places in Hong Kong.

I would suggest checking the Hong Kong Wetlands Park website to find the easiest way for you to get there. If you are fortunate enough to make the effort and be rewarded with the opportunity to see a Spoonbill it will most certainly have been worth it.