Tis the season for Transformers posts…

Hong Kong seems to be embracing the new Transformers movie with a vengeance. Even I am surprised at what we are finding in our travels.

While over in Kowloon Bay we encountered a Transformers display at Telford Plaza 2. My apologies in advance for the quality of the photos. I only had my iPhone with me and wasn’t expecting to encounter a display like this. On the plus side thank goodness for cameras in mobile phones! 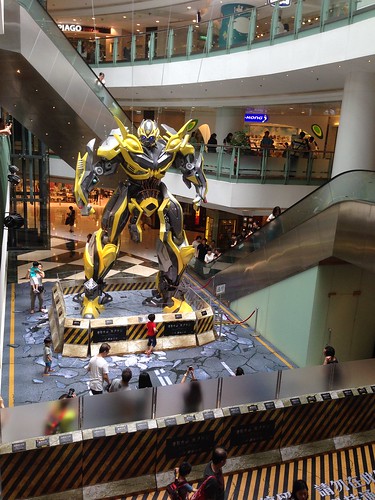 A very large Bumblebee similar in size to the 7 metre statue at the 30th Anniversary Expo in Macau takes pride of place in the centre of the mall. 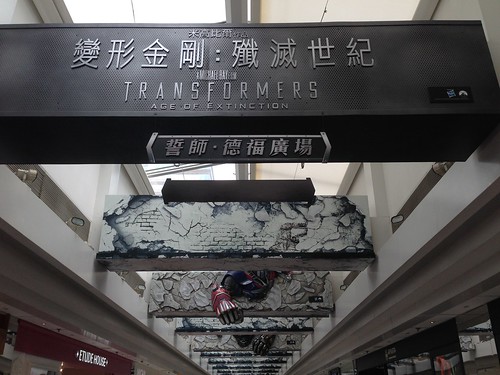 As you enter the mall, Transformers hang from beams above the corridor. 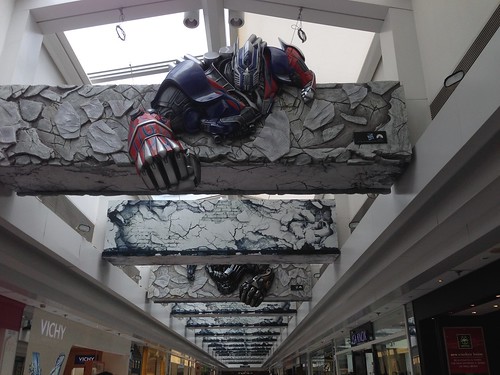 Optimus Prime crashes through one of the beams. 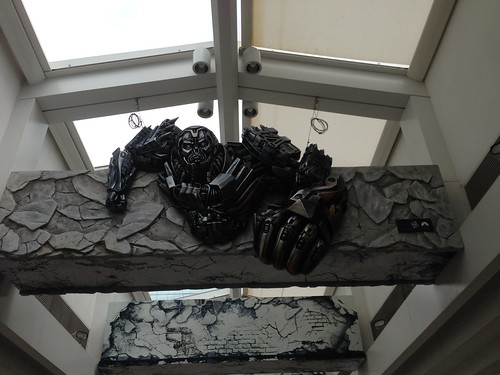 He’s followed by Lockdown chasing after him a little further along. 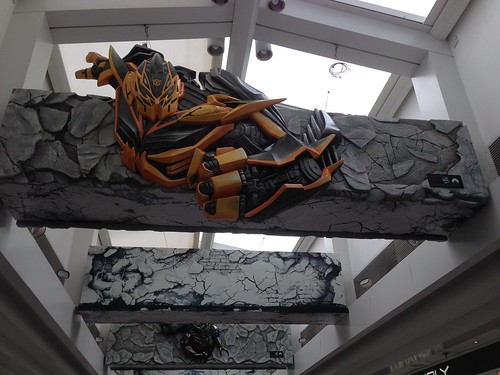 From the other end of the corridor Bumblebee is smashing his way into the mall. 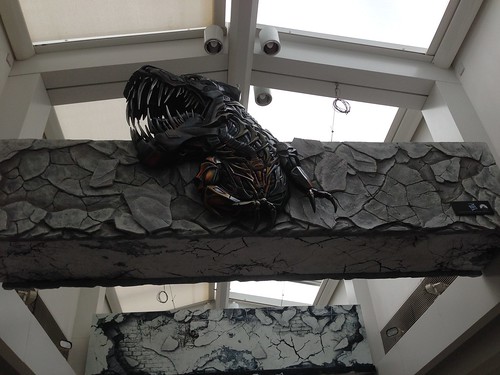 Grimlock is charging up behind him. For a shopping centre display it is actually quite well done. 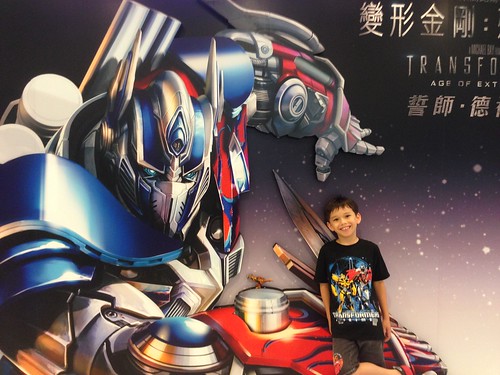 As you get closer to the large Bumblebee, a billboard of Optimus Prime reaches out to everyone walking by. Mitchell and his pocket sized Grimlock decided to sit on Optimus’ arm. 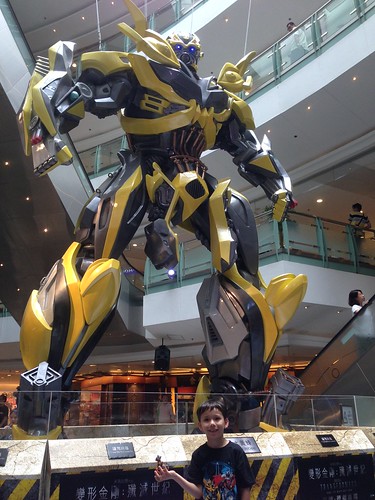 The massive Bumblebee statue is unmistakable as it dominates the centre of the mall surrounded by escalators standing tall over the shoppers. 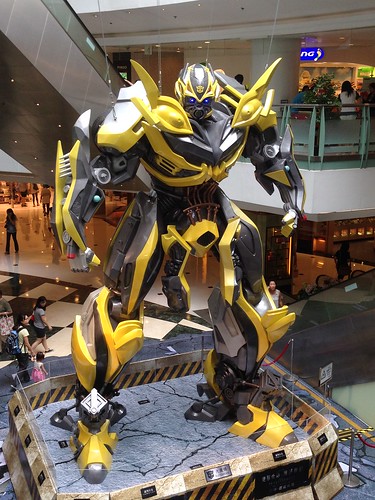 This Bumblebee is based on the Age of Extinction movie and has some really odd pieces extruding from his body. 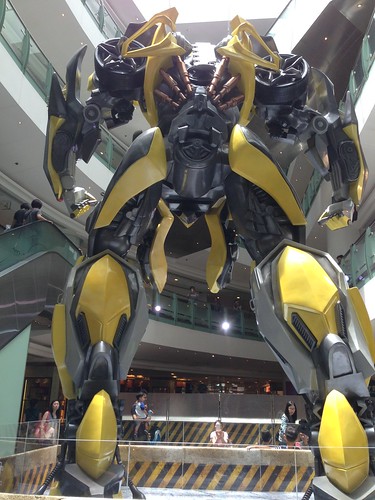 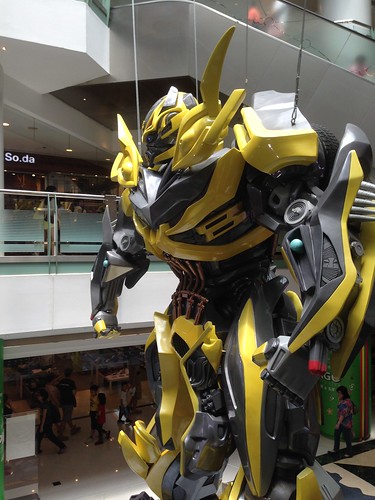 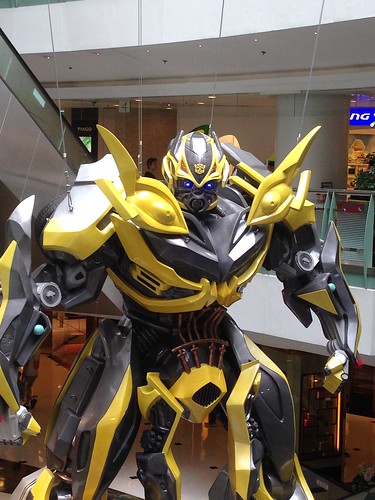 The detail on him isn’t bad for his size though. I’ve come to realise the styling of most of the statues for this movie seem to be quite simplistic and plastic in aesthetic. As we moved around him I struggled to see where his lower two tires were in robot mode. 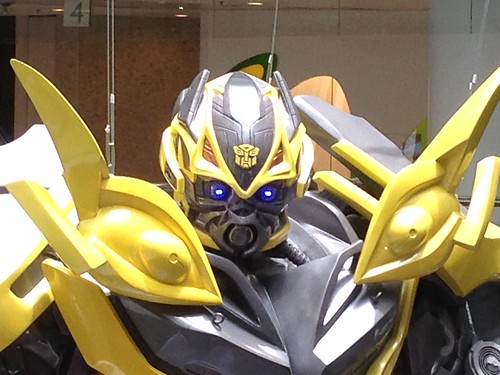 Being able to stand eye to eye with the big guy was quite cool. 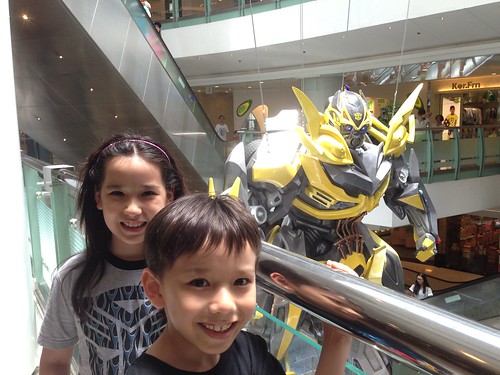 He’s not their favourite character but the kids certainly enjoyed checking him out.

I’m not sure how long he will remain on display, however if you like Bumblebee it might be worthwhile buzzing over to see him sometime soon.

We drove this particular day and were actually at another shopping mall within walking distance however Telford Plaza is right next to the Kowloon Bay MTR station on the GREEN line. The mall itself has a couple of wings to it, so head for Telford Plaza 2 to find Bumblebee.

One thought on “Buzzing around Telford Plaza, Hong Kong”