Typhoon season has finally hit Hong Kong and I’m probably one of the few crazy people here who gets excited by the prospect of one of these storms blowing in close.

Rammasun was our first close typhoon, although not quite close enough to shut the city down. Out and about, a deluge of rain bucketed down intermittently leaving a wonderful playground of puddles on the footpath. 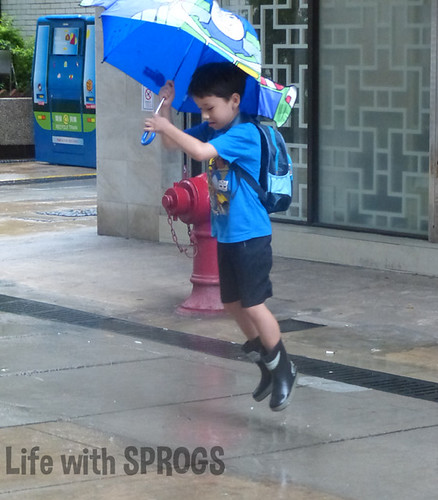 The majority of Hong Kong avoid these puddles for fear of getting their delicate toes wet, however my son finds puddles an excuse to splash and jump and play … much to the absolute horror of the locals around us. 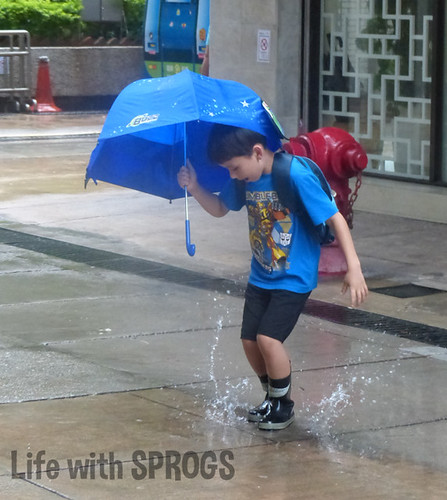 As we walked home he had a wonderful time kicking, splashing and dancing in the watery wetness caused by the fringe of the typhoon. He made sure not to splash anyone else, laughing and enjoying one of the simple pleasures of being a kid.

I was glared at and he was stared at in a most unfavourable way by those nearby. I wish I’d taken a picture of those faces for you (I’m not a huge fan of taking photos of other people without their permission though) so you could see the disgust they radiated at my little buddy having the time of his life.

He was oblivious and didn’t care and at the end of the day neither did I. Why should I deny my son the fun of water play because of a few stares. He was wearing gumboots and his wet clothes could easily be changed. He wasn’t splashing anyone but himself. He was doing what kids do… playing and having FUN.

In this fast paced city where kids are pushed to excel academically they should be allowed to balance that and express themselves through a few spontaneous bouts of fun every now and then… don’t ya think?