Geek mum that I am I’ve never been brave enough to venture to the annual Ani-Com-Games Convention (Ani-Com as I call it) also known locally as the ACGHK. Crowds snake for hours waiting to get into the event for the opportunity to pick up rare figurines and other uniquely interesting knick-knacks and I’ve always dreaded the idea of wading my way through the lines not sure of what I’ll see.

This year I decided it was time I just went and with Bethany in tow we headed off to the Wan Chai Convention Centre. Having her with me was an unplanned but fortunate opportunity as parents with children under 12 can go through an express entry. Walking (somewhat guiltily but legitimately) past the snaking crowds Bethany and I headed up to a far quieter area with no queue  to enter smack bang into the middle of the convention hall filled with a thrum of people.

There was so much to see that I’m going to split this into two posts. The first will focus on the important stuff: TRANSFORMERS.

Maps in hand we narrowed down the significant vendor for us to see first… you guessed it… HASBRO! 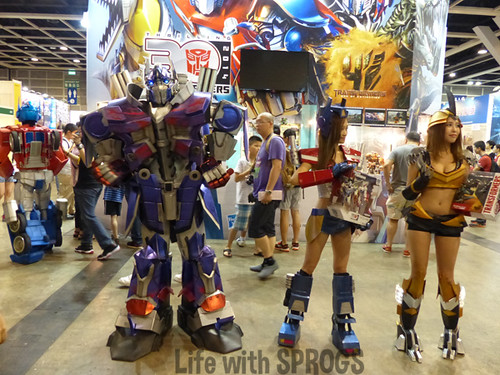 We navigated our way through the crowds to be welcomed by Optimus and his … um … young models?!?!! They were pimping out visuals of Generations Leader Class Jetfire who has yet to be released officially for everyone to take photos of. My heart skipped a beat when I saw Jetfire. This is my #2 all-time favourite Transformers character and I have wanted a real-life Jetfire – well – forever… so holding my breath I went over to their shop and there he was in all his glory for HK$499! Be still my fangirl heart! A show exclusive pre-release! Of course, I also had a 9-year old fangirl with me who had exactly the same idea on her mind and also NEEDED a Jetfire… 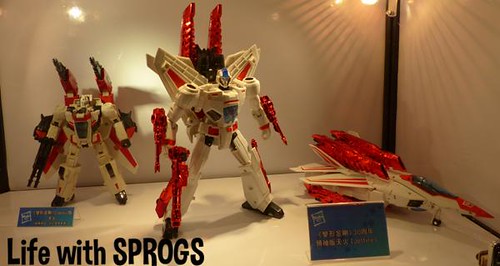 Here he is on display at the Ani-Com… 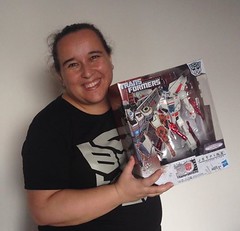 And here he is in my hot little hands once I got him home. For those concerned about the welfare of my daughter fear not; TWO Jetfires were purchased and my kids will be working their little butts off with chores and other point earning efforts to earn him as a combined reward for a shared toy. Ok – let’s get back to Transformers at the Ani-Com shall we? 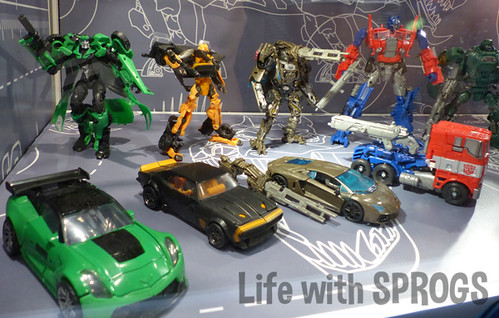 Hasbro had a rather nice display of different Transformers around their booth. These ranged from their Age of Extinction toy line, new products, such as the Hero Mashers, and custom (not for sale) products from 3rd party customisers. 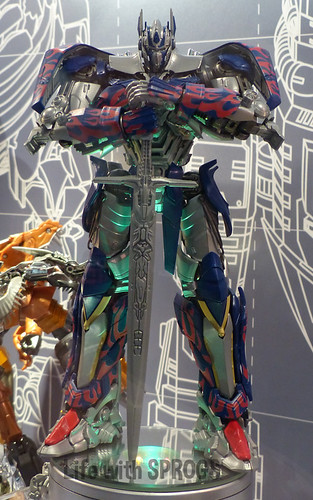 I want this guy. He is a VERY nice scaled model of Age of Extinction Optimus and to pre-order is about HK$5000 (and just so ya know pre-orders in Hong Kong are SOLD OUT!). He’s out of my budget unfortunately but I appreciate the craftsmanship that has gone into him. 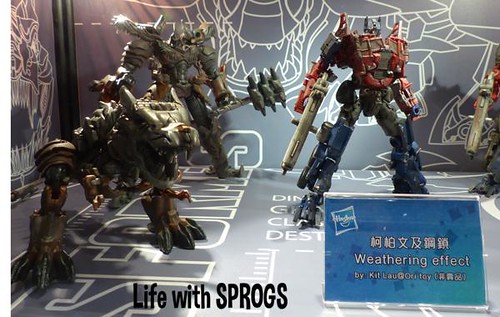 Hasbro had a display of weathered Optimus and Grimlock. I like this effect, however Optimus was a lot more beaten up, rusted and had a big missile hole in his chest in Age of Extinction so it doesn’t quite tick all the boxes for me in terms of achieving authenticity. 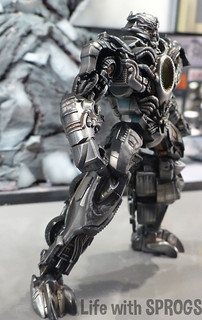 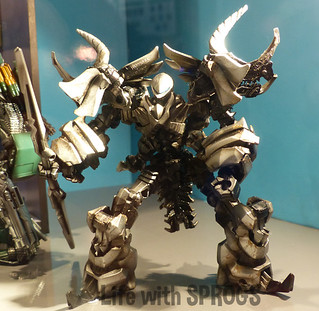 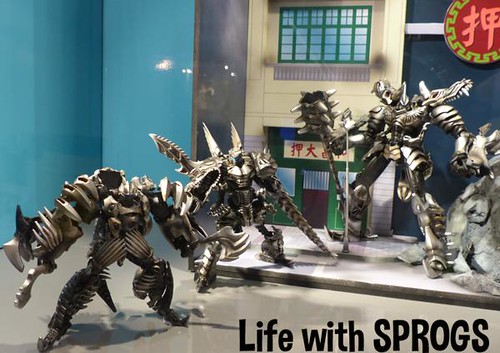 A Hong Kong street scene offered a great close up of some silvered characters. It was an engaging display. Bethany spent quite some time looking over the figures and the setting it had been built on. I liked the little quirky features such as a pawn shop sign; something distinctly Hong Kong. 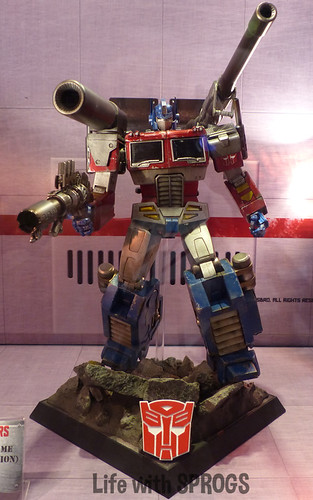 Hasbro also had (oddly) a Megatron Optimus Prime on display. I say oddly because the Prime in question is G1. Anyone who knows G1 Transformers will know Optimus is a compassionate and honourable warrior in this version of the show and he certainly wouldn’t be caught adorned in the scavenged parts of his enemies after bringing them down. It was a little creepy. 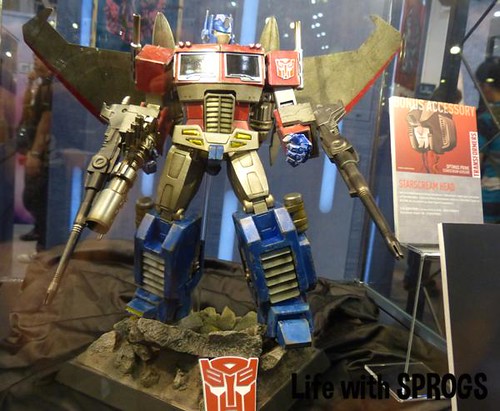 Even creepier when later on we found a Starscream version of Optimus (complete with severed head – gah!). I guess the folks at Hot Toys didn’t do their research on this version of the character before creating these customised monstrosities. 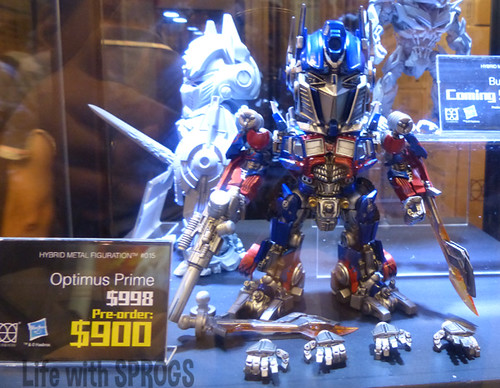 Chibi (or deformed) Transformers seem to be becoming popular. Both Herocross who I’d never heard of, and Kidslogic, who I’ve visited first hand, had different Transformers from their range on display. The Peterbilt movie Optimus Prime above is from a company called Herocross. I kind of like him, but I am undecided if he is worth HK$900. As they have a store here in Hong Kong I will probably do some research and then head out to see their store. 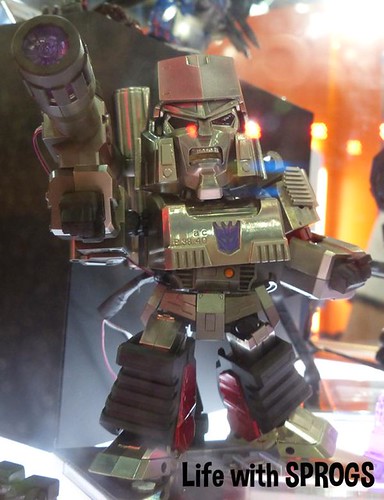 Kidslogic also do chibi Transformers and I actually own their G1 Optimus Prime (post coming soon). Their G1 Megatron is really cool as his gun barrel has purple lights that swirl. They also do a range of miniature Transformers that I hope to be able to show you in the coming weeks. 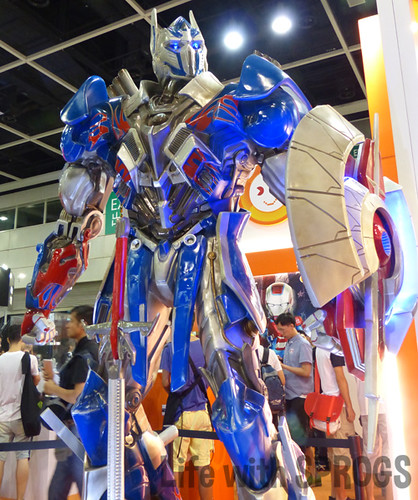 Kidslogic created a large Optimus Prime for the Beijing Premiere of Transformers: Age of Extinction. He was proudly standing looking out for danger amongst the crowds at their stall. If I was reading the sign beside him right (and it was in Chinese, so I may have misinterpreted it) you can take this 6 foot tall Optimus home for only HK$100,000 *choke*. 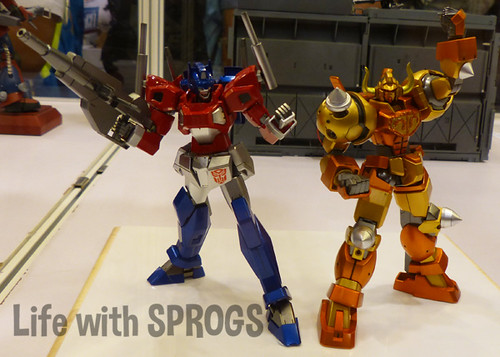 In a wonderful overlap of franchises, amongst a display of customised Gundam, there was something with a familiar colour scheme and logo. Someone had combined Gundam and Transformers to created Gundam Prime and UniChar as part of a Gundam customisation competition.

If you want to see more photos of Transformers things we discovered at the ani-com, take a look here at my complete photo album.

We didn’t expect to find much in the way of Transformers at the Hong Kong convention. However it seems this year is a GREAT year to be a Transformers fan, even here in little old Hong Kong, as Transformers are popping up EVERYWHERE.