Frozen. It’s gotta be the biggest Disney success in a long, long time. Bethany is STILL belting out the songs unable to “let it go”.

Hong Kong Disneyland has been really slow off the mark getting their merchandising for Frozen on sale but FINALLY now summer is here there are dolls in the shops and a few little Frozen goodies hidden around the Park. 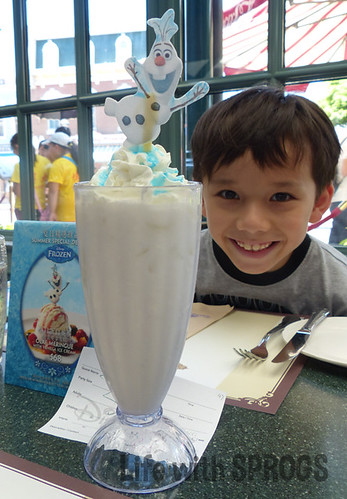 In the Corner Cafe on Main Street you can indulge in an Olaf Colada. It’s coconut milk and sprite topped with whipped cream and an Olaf decoration. At HK$68 (that’s almost US$9) it isn’t cheap and after sampling it ourselves I have to say it doesn’t taste very nice at all. Bethany took one sip and went “bleugh”. I love most coconut milk drinks, but mixed with Sprite it REALLY doesn’t work. I struggled to drink 1/2 of it down to try and justify the expense. Previously characters have been printed on white chocolate. Olaf is unfortunately printed on thick rice paper and while the stick used to place him on top of the drink is white chocolate and edible Olaf definitely is NOT. 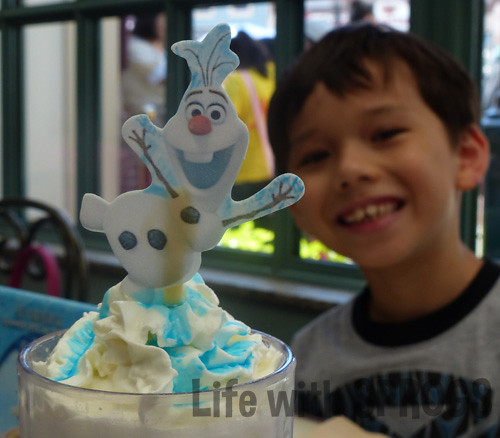 Despite his cuteness DO NOT waste your time ordering this guy. He simply isn’t worth it. 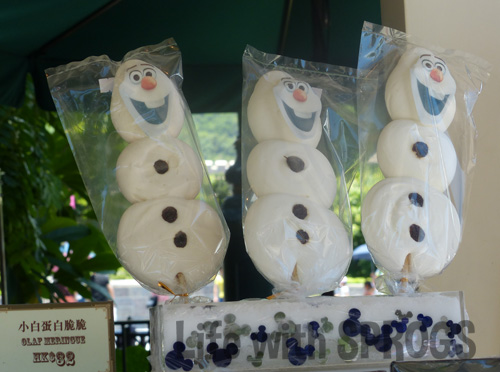 Out on some of the carts, Olaf is also making his presence known as a big fluffy meringue. Dubious from our Olaf Colada experience and noticing the face was just a piece of paper stuck to the meringue we opted not to try this one.

Apparently there are yet more Frozen edible delights to be had in the hotels, so if you are staying over there and your kids are still addicted to all that is Frozen, do have a look. I hope it is better than the Olaf Colada!

In terms of merchandising, Hong Kong Disneyland FINALLY has a range of Anna and Elsa dolls, including singing Anna and singing Elsa, as well as costumes, plates, drinking bottles and other miscellaneous paraphernalia to freeze any devoted child with. They also vary quite a lot from the fake stuff now making its way into the local Hong Kong markets so you have a lot of choice.

have you experienced the Frozen merchandise or food at one of the Disneylands? Let me know what you thought…