As you’ve probably guessed by now I like Transformers. Like … a LOT. Being the geek mum I am I occasionally indulge in getting the odd collectable based on the franchise, particularly if it is Optimus Prime.

When I discovered a toy model company located right here in little old Hong Kong have an official license from Hasbro to design and build exclusive collectibles of Transformers I couldn’t resist the chance to head over to their tiny shop in Mong Kok and take a look. 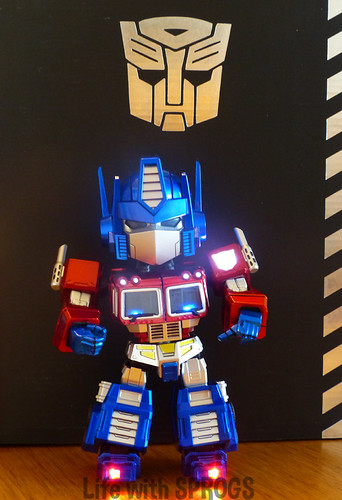 I ended up coming home with this little guy firmly in my grasp. He is what I like to call a chibi version of G1 (Generation 1, original TV series) Optimus Prime although they are also referred to as deformed figures. He is 15 cm (6 inches) tall. His toes, chest, Autobot log and eyes light up. The eyes are so bright I simply couldn’t get a nice picture with them illuminated. 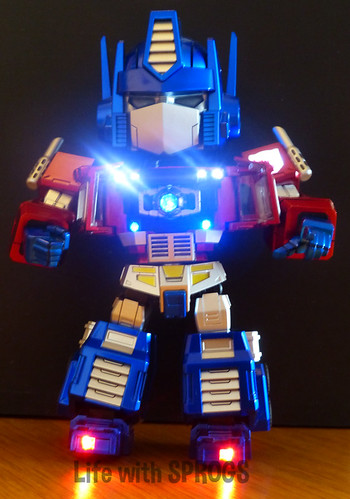 He also comes with an Ion blaster (that also lights up) and a matrix of leadership that lights up when slotted into his chest (as shown in my little guy above).

Because I brought him directly from the manufacturers shop I know absolutely 100% he’s the real deal. Believe it or not there are fake versions of him in Sham Shui Po going for over HK$200 MORE than I paid!

I got him because he is unique, quirky and different yet still has the aesthetics of the original G1 Optimus Prime I know and love. I’m a sucker for Optimus, even moreso when he’s this cute! He wasn’t exactly cheap, but by the same token he wasn’t ridiculously expensive (around AU$100) and I know he will be quite collectable in years to come.

I love the design so much I think I might be making more purchases from this company in the future.

Where did I get him?

Also, if purchasing from these guys make sure to open the box while still there and check all the lights work correctly before leaving the store to ensure you don’t have to travel back.

I’m going to enjoy displaying my little Optimus very much… don’t’cha want one too??

(No, I’m not being paid by these guys I just love the aesthetic and concept so much I had to share.)

One thought on “The Collector in Me…”