One of the more recent museums to open in Hong Kong is the 3D museum in Tsim Sha Tsui. The sprogs and I are always keen to explore things from a different perspective so we ventured over to check it out. 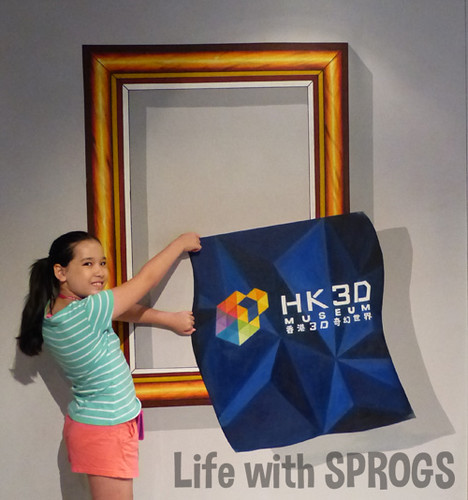 The 3D museum seems to be a private venture rather than run by the government. The entry isn’t obvious as it is housed in a commercial building in East Tsim Sha Tsui hidden up an escalator. We weren’t sure we were even in the right place when we climbed the escalator. Thankfully once you do find it the ticket counter it is pretty obvious you have arrived.

To get any benefit out of this museum you MUST have a camera (or camera phone) to capture the optical illusions.

The museum itself is a group of connected rooms. Each room has walls covered with a variety of painted scenes for you to interact with. The challenge is to both get in the right position and position the camera correctly to capture a photo that gives the illusion of being in a true 3d environment. 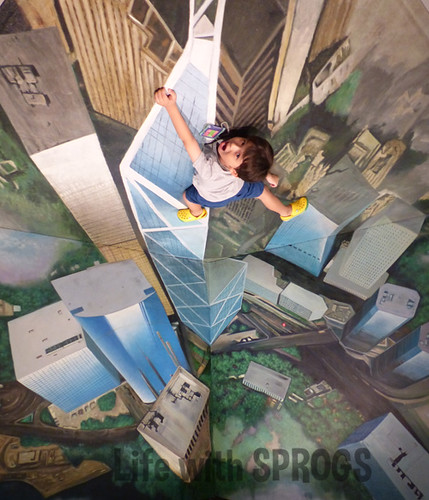 In one of the first images we tried Mitchell decided to hang around the Bank of China building in Central. 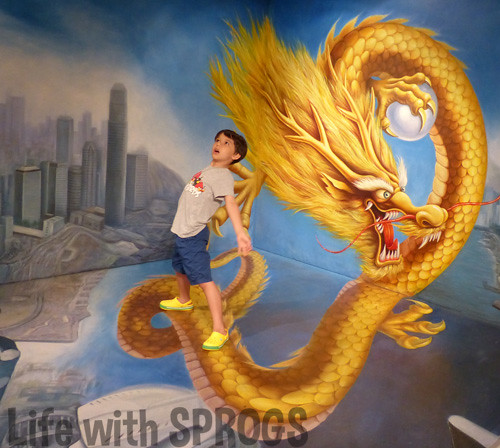 Surfing on the golden dragon didn’t work so well.

We found some of the paintings were easier to achieve a true 3D feel with than others, and some paintings were virtually impossible to achieve the look given in examples posted next to each painting. With kids, it was also hard to explain to them how and why to position themselves as the concept of what they were doing as to what would be seen was quite abstract to them. I showed Mitchell the photos after I took each one so he could try and understand what he was capturing. As we progressed through the museum and his understanding solidified he took more interest in the angles he needed to achieve the right perspective for the photo. 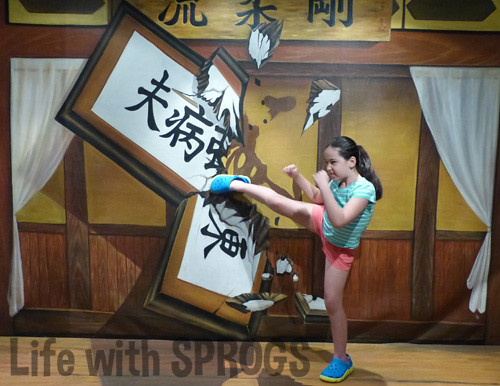 Bethany’s kick-boxing training seems to be paying off! 😉 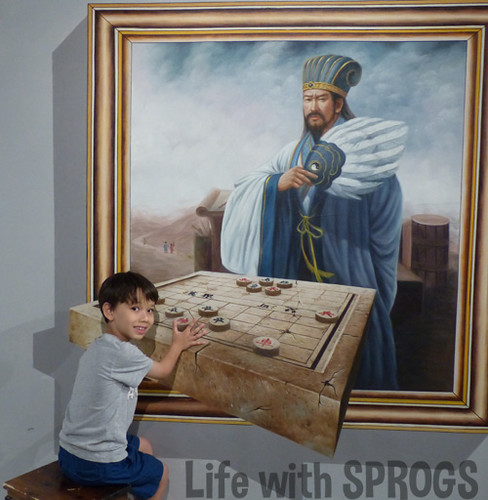 Mitchell sat down to play some Chinese chess with this painting.

Some of the paintings used props, like this chair in the picture above, to achieve the 3D impact. Unfortunately for us, this was the only painting where it looked somewhat convincing. 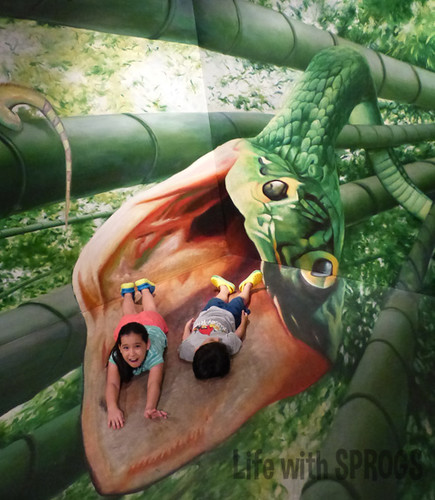 No matter how hard we tried we couldn’t get the effect of the snake to work. I didn’t think the snake looked 3D at all from any of the angles I took a shot. 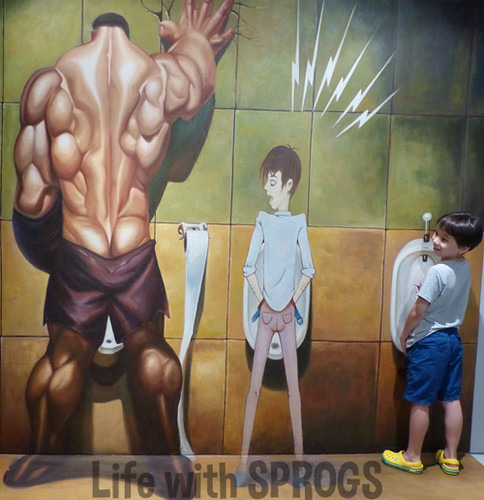 A couple of parents visiting the museum at the same time as ourselves were horrified by this particular 3D portrait and raced their kids through this room as quickly as they could. Whilst a little inappropriate my children found it amusing more than anything else. 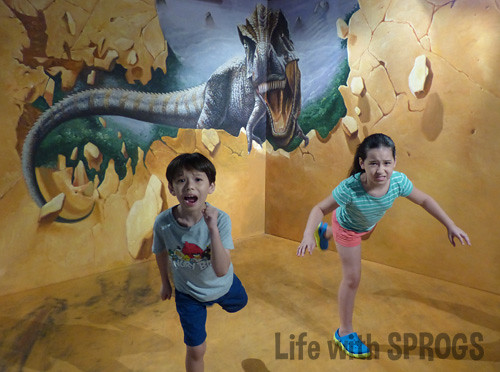 My kids didn’t do too badly with their expressions in this pic. Just a shame about the lines in the painting behind them. 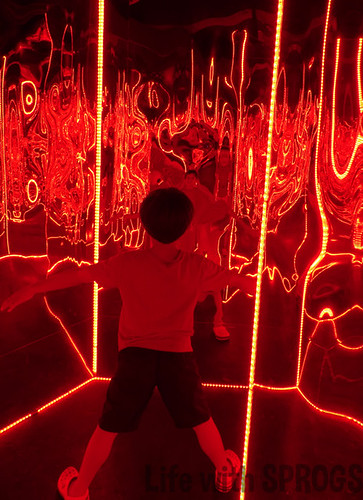 Towards the end of the museum is a mirror maze. Really it is just a windy corridor of different mirrors. Despite its simplicity my kids thoroughly enjoyed it. So much so they went through and did the maze a couple of times, stopping and letting out riotous laughter every now and then as they came across a reflection they couldn’t go past. It just shows even modern kids of today can find amusement in some of the simplest and timeless classics. 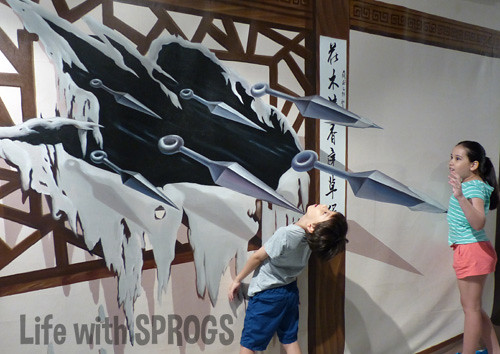 We spent just over an hour at the museum, although it felt like longer. We took photos with almost every 3D painting available. The spacing of the paintings themselves was a little cramped and we often had to wait for other people taking photos of different paintings to finish before we could try and capture a picture with the painting we were working with.

As far as museums in Hong Kong go, this one is expensive. At the time of writing it is HK$140 for adults and HK$100 for kids. Bethany actually commented that she didn’t feel it was worth it for the amount of time we spent there and I tend to agree with her. For $140 I expected a LOT more than what was on display. The word museum is misleading as this is more of a gallery than museum given 90% of the interaction is with paintings, not objects.

Whilst we did have a load of fun during our time there and came away with a few fun photos I think even my kids expected and wanted more. Whether it be a larger venue with more paintings or more diversity of 3D interactivity the museum it is missing that special something to make itself feel worthwhile. I can think of much better museums in Hong Kong to spend time visiting than this one. Such a shame.