Hong Kong is one of those cities where you miss a large part of it if you don’t look up. It is a world of high rise buildings and extremes crammed into a small peninsula and even smaller islands. One way to view it from above is to head up to the Peak on Hong Kong island and look down on the sea of craziness.

Another way to view the city from a completely different perspective is to do so from one of the high rise buildings. ICC is (as I write this) the 7th tallest building in the world. At 484 m it casts an imposing shadow over Kowloon and has a couple of great options to experience standing on top of the world (or at least Hong Kong). One way is to go for a drink on the 118th floor. The drinks are expensive (but delicious) however as the bar is only open in the late afternoon this is more of an experience for the night time skyline and not one I would recommend with kids.

A different way to see Hong Kong in all 360 degrees of glory is to venture up to Sky100. This is a pay-to-access observation deck on the 100th floor of ICC. I was actually sceptical about it which is why it has taken the sprogs and I so long to venture up there. I’ve started off a bit wordy with this post given you’ve probably clicked wanting to see what I’m on about, so without further adieu lets have a look at the view…

Every side of the observation deck opens up a different aspect of Hong Kong. This is a sky high version of the iconic Hong Kong Island skyline from Wan Chai/Causeway bay to Central (notice the second tallest building in Hong Kong – IFC 2 on the right). 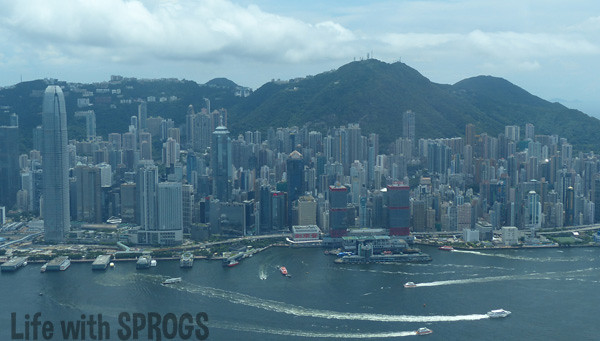 How about the view from Central (IFC2 on the left this time) over to Sheung Wan and Kennedytown, also on Hong Kong Island? What I like about this view is the fact you can not only see how dense the buildings are on Hong Kong Island but also how mountainous and GREEN it is. However don’t expect your alien ship to coast over the top of that green mountain and end up in Wushan Valley… it simply ain’t gunna happen unless you’re in the movies.

Pulling yourself away from the view over Hong Kong Island, Sky100 offers a different view of Hong Kong that you simply can’t get from other vantage points. Above you’ve got a view of the Hong Kong shipping port, several typhoon shelters and the mountainout landscape tapering off into the pollution that is the New Territories.

The Kowloon skyline is vastly different when viewed from ICC. A sea of high rise buildings flow back towards the green hills that eventually become the New Territories and beyond that China.

Ok, ok … enough about the views, let’s talk about the experience.

As the lift shoots to the top of the building, much like Superman flying up the internal structure of the Eiffel Tower, the seconds and floors tick over as the high speed lift makes it ascent. 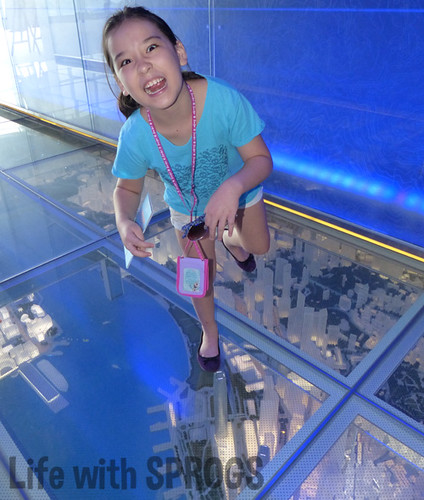 Once you emerge onto the observation deck floor you walk over a 3D map of Hong Kong. Bethany thought it would be funny to go all Godzilla on the map, safely shrouded below her stomping feet by perspex. 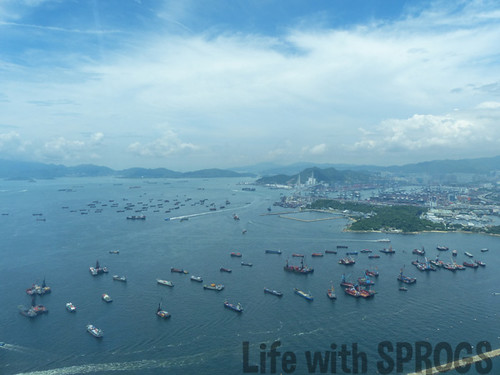 You’re hit by the views on every side and when we were up there despite a couple of large tour groups there was plenty of space for us to find our own views and take photos without being pushed around. 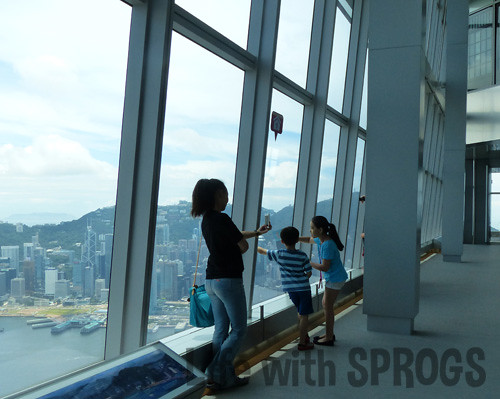 However it would appear that at least one tourist thought my kids were more spectacular than the view out the window. *sigh* Yes this happens a LOT to Bethany. This particular lady followed the kids around (I think she was videoing them) for a while before she noticed me photographing her and became somewhat horrified. 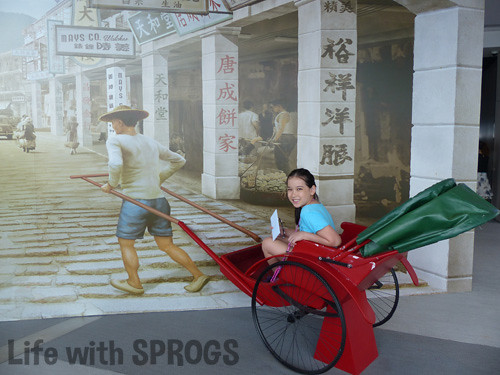 There were a couple of optical illusions set up around the deck you could photograph for free. Bethany quite liked the rickshaw. I suspect this display was done by the same person/group responsible for the 3D museum as the artistic style and setup was very similar. 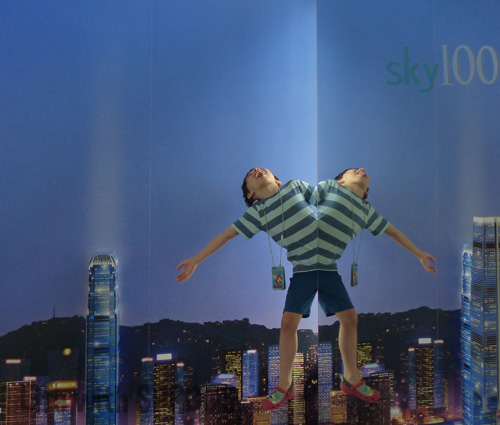 I soon discovered my kids found mirrors decidedly more fun. The idea of trying to make a mirror image of your body was lost on Mitchell. He wanted to be a 2-headed monster and succeeded. 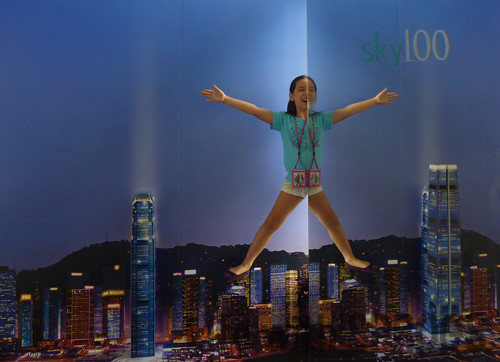 Bethany tried her best to get the mirror image to line up but this was the best she could come up with. Both my kids thought the mirror was the funniest thing and I have a suite of photos with utterly ridiculous poses from this one display.

After all that mucking around we decided to have something to eat at the little cafe on the observation deck. It had a few nice table booths to sit in, relax and enjoy the sky. The cafe isn’t cheap but for the novelty factor I was willing to splurge a little. We ended up getting the high tea set which I thought was quite reasonable… 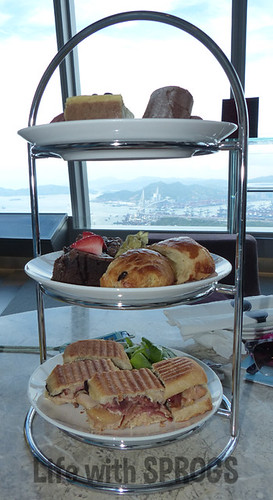 Until (after ordering) I was told it wasn’t made fresh. All the sandwiches are pre-made elsewhere and can’t be made to order. The cakes tasted pre-made and the swiss roll filling was utterly inedible. Lesson learnt: Don’t eat the food up Sky100, go and get something in the mall below. We enjoyed the atmosphere and the view. The food simply didn’t measure up to the same height.

Overall Sky100 was a great outing for the kids who got to appreciate a birds eye view of Hong Kong, learn some geography, history and have fun at the same time. While it isn’t somewhere I would go back to frequently it is somewhere I would definitely put on my list to take tourists visiting Hong Kong. 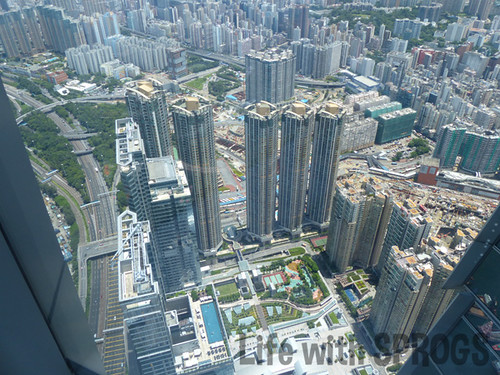 The ticket price is quite expensive at HK$168/adult and HK$118 for kids however there are discounts available if you hunt around. At the time we went we got a discount with our Toys’R’Us Star Card to get the tickets cheaper. When I think on it, compared to other observation decks I’ve been to around the world the pricing isn’t that bad and the view is simply amazing.

2 thoughts on “A Skyscraper Eye View of Hong Kong”