I live a crazy life, but I also love to take time to help out in the community when I can.

I’m part of a wonderful group called Ladies Circle Hong Kong and through them recently had the opportunity to help out with local elderly at a special charity lunch organised by the Hong Kong Family Welfare Society to celebrate Mid-Autumn Festival.

Behind the glamour of glistening skyscrapers, bustling chaotic streets and international financial hub Hong Kong has a lot of people who struggle to survive. As some people get old and can no longer work, their income dries up. Left to fend for themselves they can’t necessarily afford to eat as often as they should. As their bones and bodies wear out they may not be able to afford the care of a helper or nursing home. Struggling just to do everyday things, these people are often forgotten or over-looked because Hong Kong is seen as such a well off and capable city, and, lets face it – Hong Kongers live busy and fast paced lives where they often don’t stop to take a breath. Thankfully there are organisations who try to seek out families, children and elderly in need and bring small moments of care and joy back into their lives. 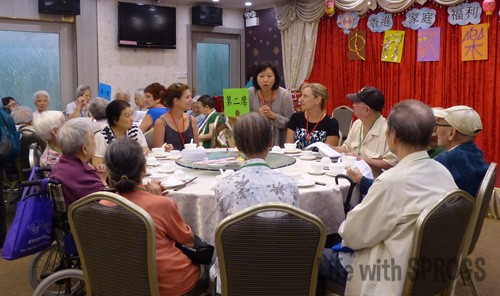 The event I attended brought together a range of elderly locals from Quarry Bay and Sheung Wan, the oldest being a grand 93 years old! For many of these people getting around can be a chore and going out to a restaurant is a luxury most never get to enjoy. So this was a special treat for them indeed.

They were a little confused to have several western ladies joining them for their special lunch. Their curiosity turned to smiles as they realised we were there to spend time with them, take an interest in them and support them. Even more-so when some of us were able to communicate, even just a little, in Cantonese.

Seated around tables they quietly chatted amongst themselves before enjoying a few games to stimulate the mind and win prizes. The goodies (toothpaste, crackers, noodles, rice) were gladly received, eagerly packed away to be gratefully used later. 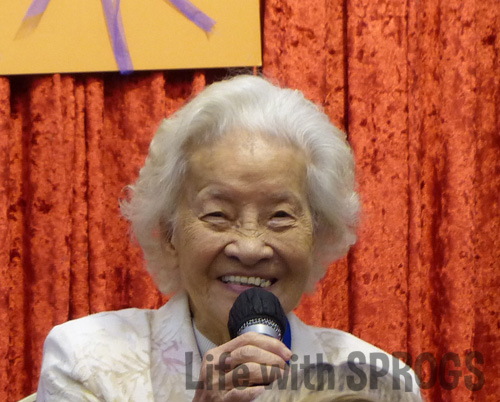 A couple of the older ladies got up and performed for everyone. No one cared whether the songs were in tune. Everyone supported and joined in their happiness. That they still wanted to give and share of themselves was inspirational. They prove that growing old, even in less-than-perfect conditions, you can still live, love and enjoy your life.

Lunch was a seafood laden celebration of prawn dumplings, siu mai, noodles, stir fried seafood, a whole steamed fish and numerous other goodies for everyone to enjoy. I loved being able to serve those at my table, as I would my in-laws. They were a little surprised an expat lady could serve them but delighted at the respect and service we were offering.

One gentleman at my table took full advantage of the fact no matter how many times he put his bowl out to have it filled with food I would oblige. He gleefully smiled at us the whole time, enjoying the attention and the environment. 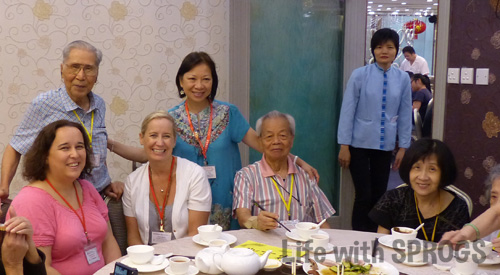 He eventually asked to take photos with us so he could remember the event. He’s the young 93 year old gentleman standing behind us in the picture above.

One lady was stand-offish when she had a ‘gwai-poor’ (me) sit next to her. She grumpily sat huffing through the formalities until the food came. When the first course (prawn dumplings) arrived, I stood and served one to her plate. She was shocked but gladly accepted. As each dish came I always made a point to offer to serve her. She munched down as much food as she could handle at every opportunity. Slowly her gruffness eroded and a small smile snuck through. After the meal, several grand prizes were randomly drawn from the list of attendees. Each winner got a silver covered present to take away. The lady seated next to me was one of the lucky winners. 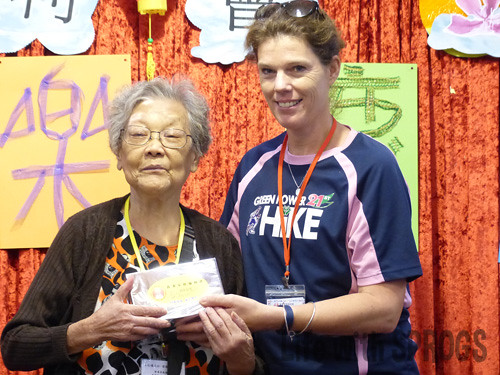 She proudly took her prize from another Ladies Circle member on stage. As she returned to her seat I stood, patted her shoulder and said “Gung Hei” – it means congratulations. She turned and rewarded me with a grin from ear to ear like a schoolgirl who had just received a giant bag of candy. It was a brief moment that truly showed how much this lunch could help these people both in a real and emotional way.

As the lunch ended we had a number of the elderly who attended come up and thank us. We had shared and cared for these people in a seemingly simple and small gesture that had for most of them meant more than we probably will ever know. It lifts my spirits to know I was able to be a part of something that helps real people in the local Hong Kong community. I think all the ladies involved that day came away feeling the same way.

I can’t WAIT to be involved in another event like this! I love seeing people smile!

Do you ever help out with charity in your local community? Do you feel it is rewarding and worthwhile to volunteer?