Disney has a new night time parade premiering October 1st 2014. I was lucky enough to get a sneak peak at the parade during one of the Magic Access Appreciation Nights last week. It’s called Paint the Night and as you’d imagine it’s full of fun, lights and LCD screens. Visually it is simply stunning.

A new parade for Hong Kong Disneyland is overdue and this parade, albeit only available at night is sure to re-invigorate some of the magic in this small parks presence. It’s a needed addition given the next real expansion, the Ironman Experience, won’t be opening for quite some time yet. 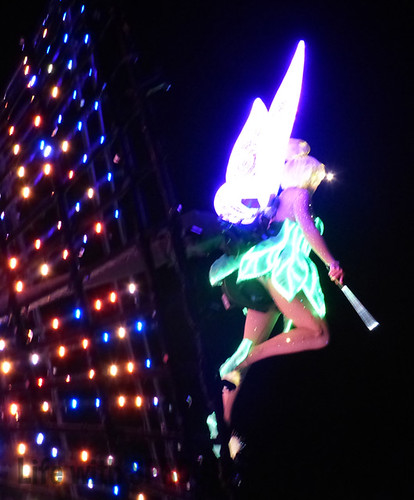 Tinkerbell illuminates the night as she hovers above her float at the front of the parade. 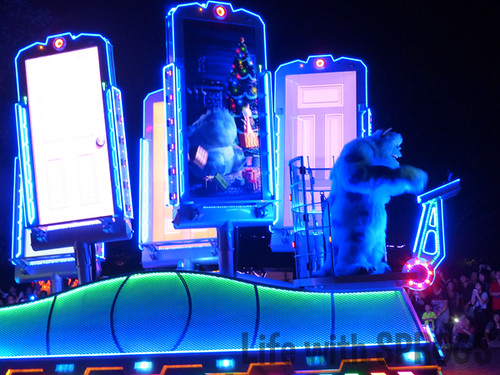 Sully leads the way on the Monsters Inc float. The float is full of LCD doors that open and shut with hilarious scenes unfolding when the doors are open, including the occasional cameo from other characters. 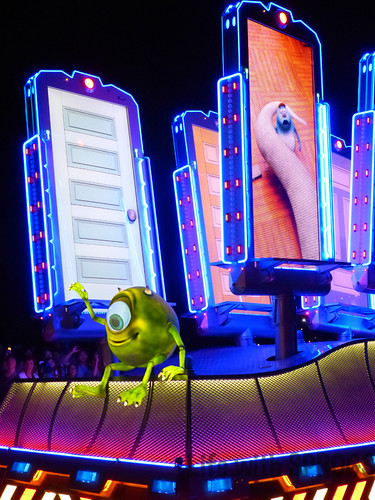 Mike is hidden on the back of the float looking stunning in his glowing slime green. 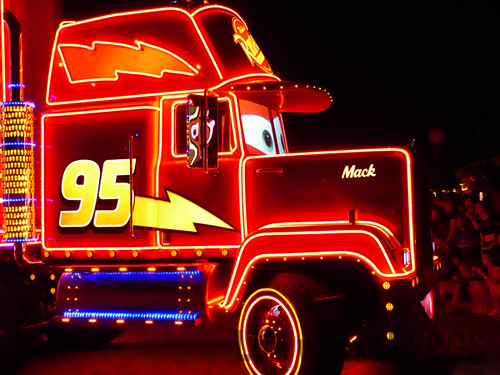 Mac is the largest float in the parade. He’s a full sized truck and his chassis is illuminated in such a way to really bring his detailing to life. He’s got a giant trailer packed with disco dancing lights through it. I was totally blown away by his presence and Mitchell was delighted beyond belief. 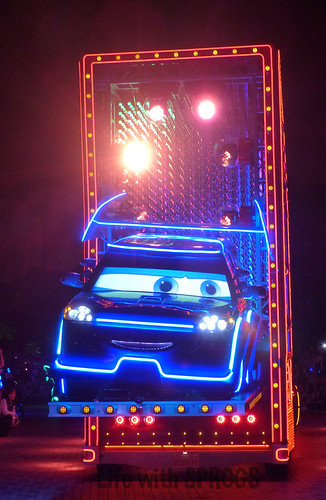 Sitting on the rear of Mack’s trailer is DJ. He bops along to the music as he looks left and right watching the crowd. 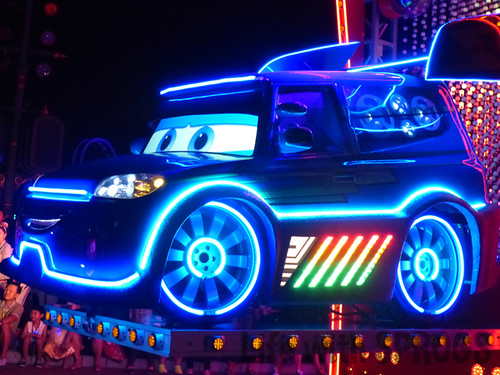 He was designed, even in the movie for this kind of thing and he looks just as amazing in real life. (Does anyone else think he looks a lot like RPMs Soundwave btw?) 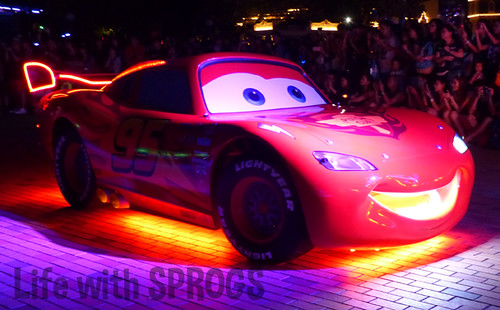 The Ka-Chow of the parade follows closely behind Mack. Lightning Mcqueen is one of the most popular Disney characters (STILL) in Hong Kong and Asia in general so he was certainly a crowd favourite. He watched the crowd as he drove along and stopped every now and then to rock from side to side in time to the music. 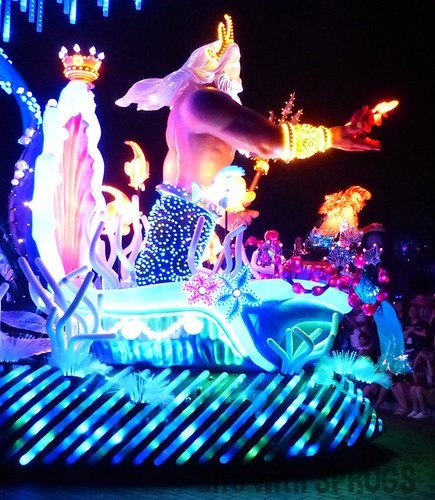 No Disneyland parade is complete without the princesses. Ariel finally gets her chance in the limelight shrouded in the omni-present glow of her dad – King Triton. She has aways been popular so it is nice to see her finally getting her chance to shine. 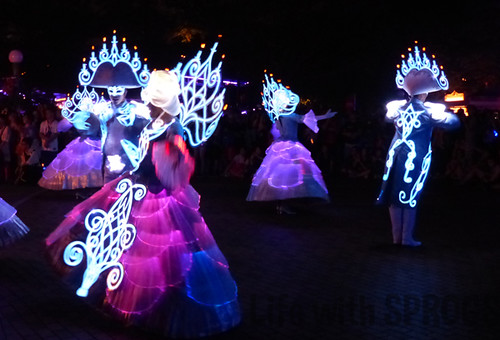 Dancing candelabras could only mean one thing… 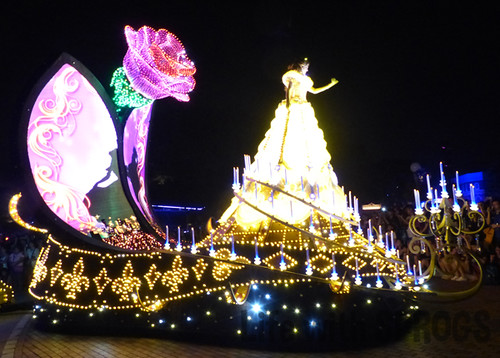 Belle looked every bit the beauty she is in a dress that seemed (and possibly was) 10 feet tall. The screens behind her swirled with colours and imagery as she rolled past. Surprisingly Ariel and Belle were the only two princesses in the parade. None of the original classical princesses got a look-in this time around and I suspect this parade had already been planned and set in motion before Anna and Elsa became popular… 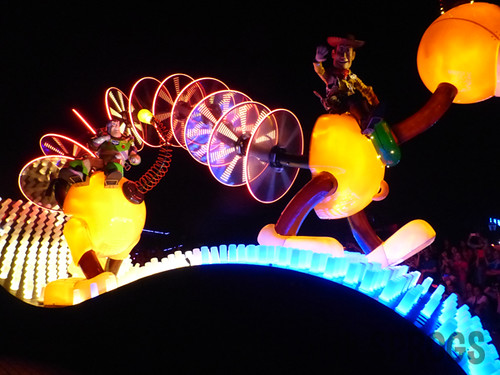 Slinky Dog wound down the pathway with Buzz and Woody atop his swirling disks. As cool as he looked it was really hard to see Buzz and Woody on his back as they weren’t very well lit. 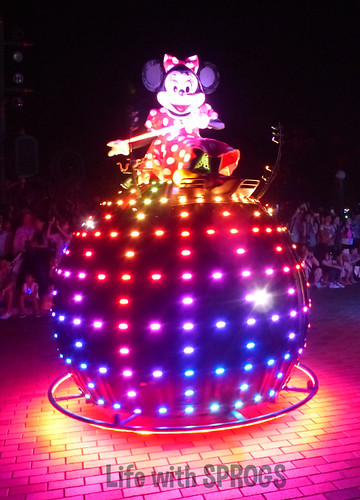 Balls of colour spun around as the classic characters – Goofy, Donald and Minnie rode atop a ball each. To be honest, at this point I was a little disappointed with the balls. They weren’t anywhere as spectacular as the floats and vehicles that had come before them. However the finale float made up for that… 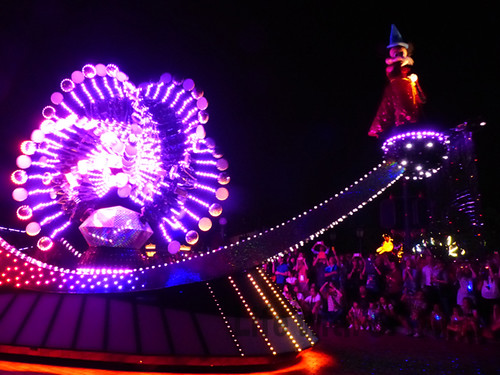 Mickey rose above the crowd in his Sorcerer Mickey outfit riding one of the most amazing visual floats I’ve ever seen. It certainly was worthy of a scene in Fantasia. The particle behind Mickey swirled in hypnotic colour and left both my kids mesmerised. Mitchell LOVED Mack and adored Mcqueen but for sheer lighting spectacle he kept talking about the ball behind Mickey on the final float. Bethany thought it was amazing too and she was delighted her once favourite princess (Ariel) finally got her own major showing in a full length parade.

The kids enjoyed the parade and overall it was visually spectacular. I would have liked to have seen another float or two to just give it a few more minutes of wow as it wasn’t quite long enough to make us feel it was complete. On the night the parade also had a technical problem where poor Mack was so large he couldn’t navigate the crowds in front of the castle, but that’s why they have these practice runs isn’t it!

This parade is worth staying for, although younger kids are going to find it tough to stay up late enough to enjoy it. Never-the-less if you are in Disneyland in the evening, I would recommend catching this parade at least once. My kids want to go back and watch it again sometime soon and Bethany has already picked up one of the songs in the parade (from Wreck It Ralph) that she hasn’t stopped singing.

Paint the night in colour? Indeed this does.

Are you a Disnerd like me? Do you have a favourite parade from one of the Disneyland’s around the world? Let me know how you think this one compares.