My kids school runs a book week once a year where the kids are encouraged to dress up as their favourite fictional characters for a day. A notice came out that gave us about one week to prepare any potential “costume”.

Mitchell surprised me by asking if I could make him a costume. A surprise because, well, he just isn’t really a dressing up kind of kid and this is the first time EVER he has wanted to, let alone asked, to dress up to go to school. So of course, excited by this new development I enthusiastically said “Sure!” not entirely realising what I was getting myself into.

Mitchell: I want to go as Grimlock!

Mitchell: NOT movie Grimlock. The REAL one, like Masterpiece, in the comics.

He was asking for a costume for G1 Grimlock (1980’s cartoon version). This isn’t the kind of thing you can get down at your local costume street (yes – we have one in Hong Kong – it’s called Pottinger Street, located in Central) let alone find hanging on the racks in a Toys’R’Us.

And before anyone comments on Grimlock NOT being a book character, our school considers graphic novels (comics) as books and therefore valid characters.

“Oh boy… what HAVE I got myself into?” I thought silently as my son bounced around like a hyperactive puppy with excitement.

I did a little research and discovered that a) Cosplay costumes normally take a long time to make and b) there aren’t really any kids cosplay G1 Grimlocks out there, nor any instructions on how to create such a costume… not that I expected it.

Not one to be held back nor willing to disappoint my son, I decided to take it on myself to try and come up with something that would be simple and functional (after all he has to participate in his regular day at school with whatever he wears) yet still look enough like Grimlock for Mitchell to feel he had gotten what HE wanted.

As someone who likes to build models, I decided to deconstruct how Grimlock would look as individual pieces and work from there. By doing that I realised the simplest idea would be to do a head (without the lower jaw as it would obstruct view/ability to sit in class and write) and tail. Anything else on top of that would be a bonus. On the plus side Grimlock is angular panels, which made constructing his head an easy concept (on paper at least) with calculated measurements, angles and proportions. 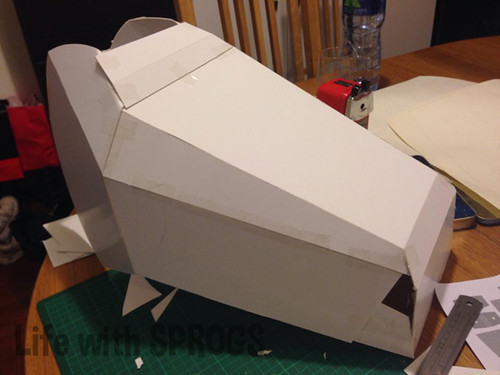 Slabs of thick cardboard, silver card, foam sheets and red and blue sparkly paper and cellophane in hand, I hacked up the slabs of card and slowly the pieces I designed started to come together. Mitchell would bounce around excitedly on the evenings or days I had been able to progress the costume for him (I only had 5 days to make this happen).

He helped stick the silver card over the cardboard base as we madly rushed to get the costume finished on the weekend. As I tested the placement on his head he beamed with utter delight and stomped around the apartment saying “Me Grimlock no bozo! Me KING!” in homage to the G1 cartoon Grimock he loves and adores.

To allow the head to sit securely on Mitchell, I used a small hardhat and created a foam structure that was glued to the inside of the cardboard head. This allowed Mitchell to have the head sit comfortably and was easy for him to take the head on and off. Remember this is a creation for a 7 year old kid, so I couldn’t make it too elaborate in design and it had to remain simple in functionality.

Head complete the tail was next on the list. Constructing the tail was relatively easy. Placing the tail was more difficult. Originally I used the proportions of the tail as it would sit on the Grimlock figure/animated character. Soon I realised this wasn’t going to be practical for walking and playing around in, so I raised the tail significantly to sit on Mitchell’s lower back. It doesn’t look as good as I wanted, but Mitchell didn’t care. He swished it around batting pretend Decepticons out of his way with his tail and a grin from ear to ear.

As a last addition with time running short to try and get something complete, I whipped together a little chest plate with the Autobot logo on it… more so the teachers might make the connection of who Mitchell was portraying through identification of the Transformers franchise. 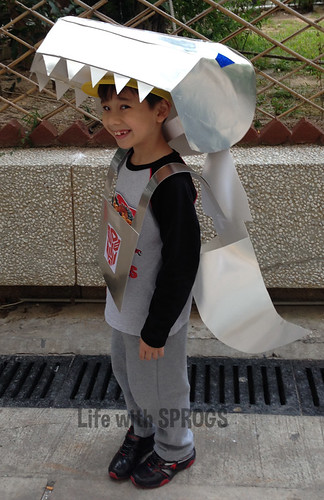 The Monday morning, Mitchell stomped out of the apartment and down through our common area a very proud Grimlock indeed. 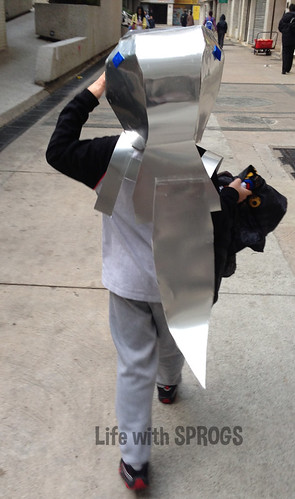 Smiles and a few knowing nods greeted him as we walked to the car.

Up at the school Mitchell stomped into the sea of Anna and Elsa’s, Ironman’s and disney princesses in the playground. I was surprised (because he kept the costume on as much of the day as he could) and delighted that he was approaching this with such enthusiasm.

I’m not sure many people would have known who his character was but Mitchell didn’t care because HE knew and embraced the character he loved in voice and attitude.

Imagine my surprise at the end of the day when Mitchell came home and told me he had won first prize for his costume amongst all the Year 3 kids and beat out 2 Harry Potters in the finals! Neither of us had known there was a competition for best costume and to hear that my often timid sprog had stood in front of all of Year 3 AND been voted as best costume by his peer group without him hiding on the sidelines was jaw-droppingly amazing for me. If a simple act like dressing up as one of his favourite characters can bring that pride out of him then I would go through all that effort time and again to help encourage my sons confidence.

Mind you, I haven’t dared to ask who is next on his cosplay list…

My little cosplay kid; So proud!