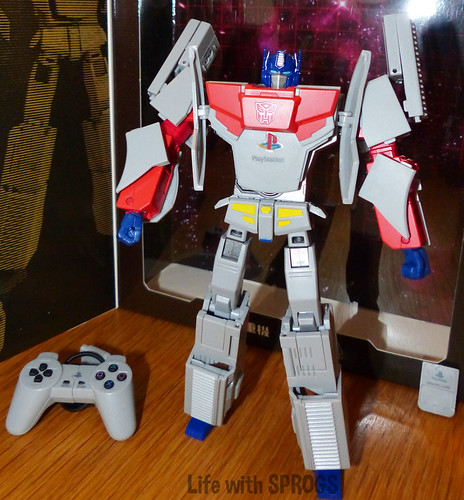 Retro gamers and kids of the 80’s will hopefully get a smile from this guy. For some reason he was quite delayed in delivery to Hong Kong stores but he’s finally on the shelves! I was a bit disheartened to find I paid HK$100 more for him in pre-order than his on-shelf price, but I guess that’s the way it sometimes rolls with collectable figures.

Whilst Optimus will always be a big red hero truck at heart I don’t mind these “fun” transformation figures. The nostalgia of this one for me made it a “must have”.

However I have to say I am not as enamoured with this guy as I thought I would be. Don’t get me wrong as he IS a fun figure, however he isn’t as stable and robust as I expected. Out of the box my figure has a couple of blemish marks on the “CD” lid. Not enough to take him back but annoying none the less. This guy also doesn’t like to stand up. It takes a bit of manoeuvring and playing with his pose to get him to stand and it is tentative at best. It’s a pet peeve of mine but if you’re going to have a robot mode, you should be able to stand up in that mode easily, ESPECIALLY if you are a Prime. 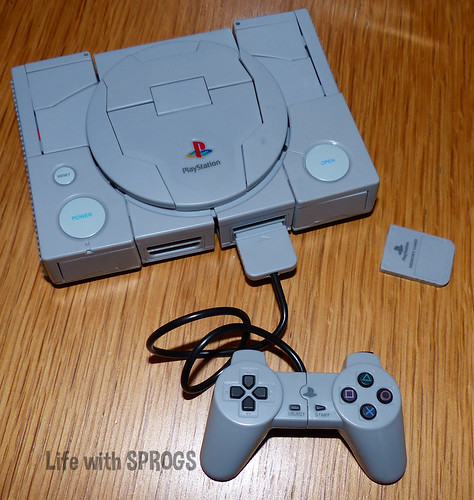 The transformation is not too bad, but no matter how I tried there were always a few gaps in the finish of the Playstation. I went backwards and forwards for about an hour trying to get a “clean” seamless transformation and it simply wouldn’t give me something I was happy with. Notice the gap at the front of the console. Every time I closed that up a gap would appear on the side no matter how I tried to contort different pieces. 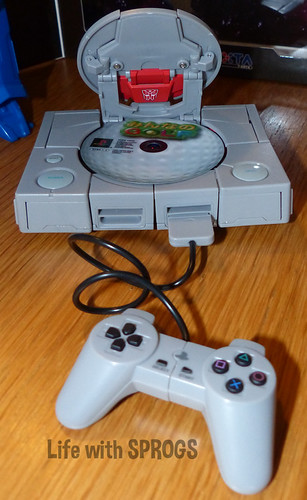 What I DO like about this guy is the functionality. He opens up to allow you to put a little fake mini-CD inside. My sprogs thought the console was real when they saw the CD in it and wanted me to plug it into the TV! hehehe

They were most disappointed when I told them he was “just” a Transformer. I can’t help wondering how cool he would be if he WAS a full sized and fully functioning Playstation. How addictively cool would that be? 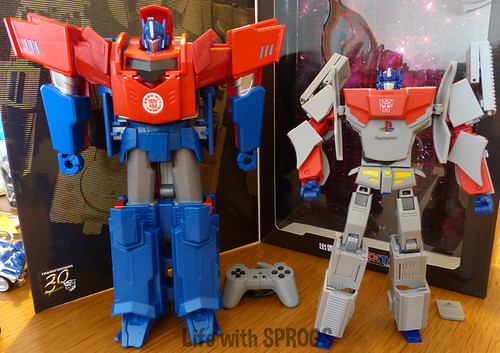 Playstation Prime is smaller than the real thing but he isn’t TOO small. Here’s how he stands up next to a hero classed RID2015 Optimus Prime. 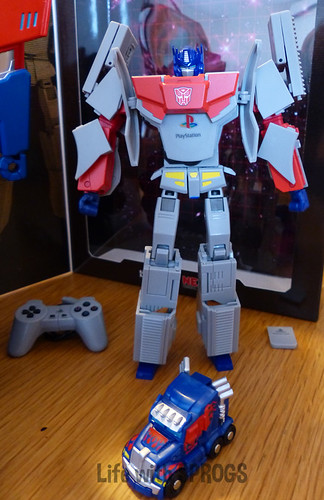 And at the other end of the scale, here he is with a QT Optimus Prime. 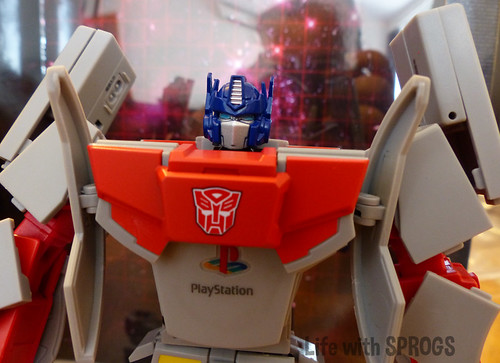 Unlike some of my other quirky Optimus Primes this guy has a lot of loose plastic on him which makes me cautious about playing with him or transforming him too much. Admittedly he will be a display piece, and I’ll probably keep him in robot mode if I can’t get him to give me a seamless transformation into his alt Playstation form. I’d love his robot mode a lot more if he was more stable and able to support himself without a lot of fiddling.

I’m glad he’s in my collection as I can never have too many Optimus Primes but the reality is he doesn’t quite meet the expectations I had in terms of quality. He’s definitely a figure who looks better in pictures than in hand.