It’s that time of year again when the biggest anime gaming and comic convention hits Hong Kong and (of course) I couldn’t resist the urge to trek over to Wan Chai and take a look.

Just like last year, I’m going to split the posts and do one that focuses specifically on the Transformers we saw followed by a post with all the “other” stuff.

Once again I had my partner in geekdom and “express pass” with me … Bethany, who already had her eyes set on the Hasbro booth as we repeated our ability to quickly and easily enter the convention bypassing the queues. I noted this year that tourists holding a foreign passport were also allowed to use the express queue, so something to keep in mind if you are ever heading through when ani-com is on.

Ok, Let’s get to the TRANSFORMERS, starting straight out with Hasbro and Toys’R’Us who partner on their booth at this event.

Optimus was back this year along with his set of models and the ultimate Decepticon leader himself – Megatron! 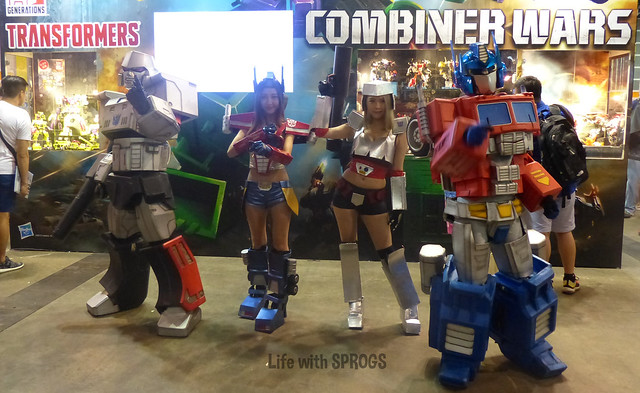 It was fun to see the classic and iconic pair in front of the booth. 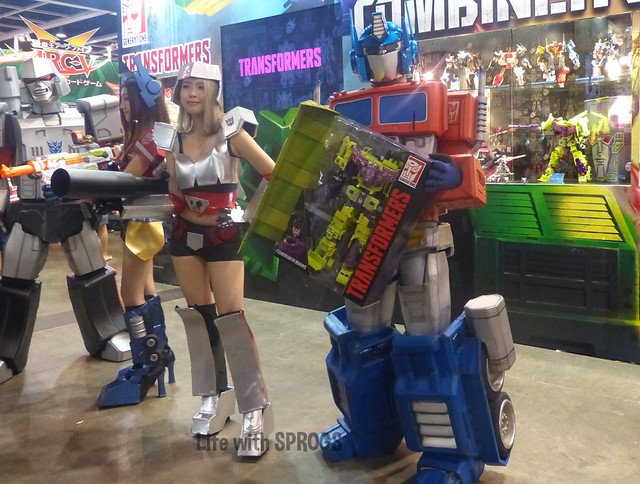 Optimus proudly displayed one of the show exclusives: SDCC Devastator with his chrome purple paintjob. The other Transformers exclusive was the SDCC Combiner Warriors Set which includes Windblade, Arcee and Chromia in unique repaints with some pretty cool weapons (but that’s for another post).

Here’s a better look at Devastator from the display. 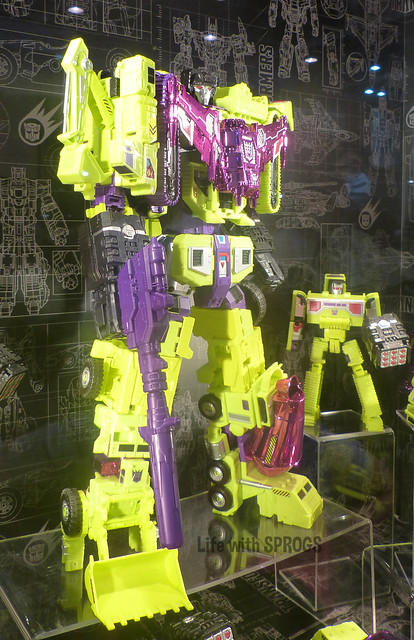 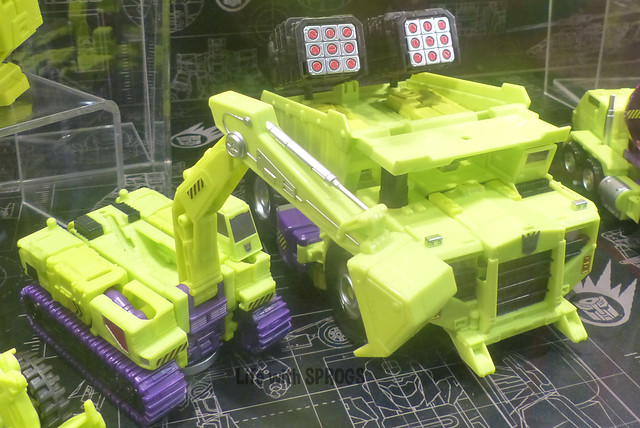 Sprog #2 has the regular version on pre-order and I know he isn’t going to put this set of figures down when he finally gets his hands on it.

For anyone who doesn’t think Transformers are popular in Asia… you might wanna GET IN LINE! 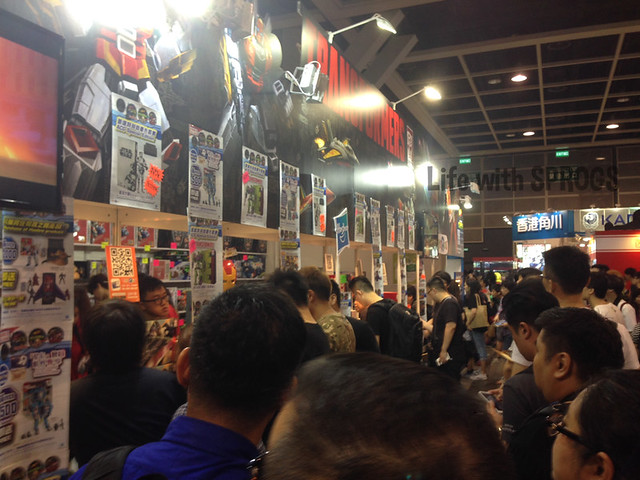 Yeah – those Devastators were literally flying off the shelves on the Toys’R’Us booth! We had to wait about 1/2 an hour in this queue to purchase our figures and we ended up getting some figures for free – Silver Knight Optimus Prime (Thrilling 28 of 30) as well as a micro-changer and a Black Series Jabba the Hutt. 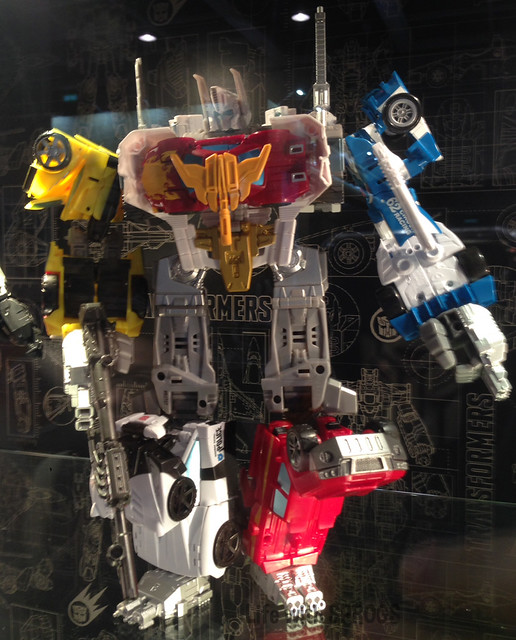 Ultra Prime, which will be the next release in the Combiner Wars series (made up of a repainted white Optimus (not to be confused with Ultra Magnus)) Prowl, Mirage, Ironhide and Bumblebee was on display. Hot Rod makes up the chest. The characters are all basically repaints of other figures so engineering-wise there isn’t anything new there. The good thing is the previous Combiner Wars are very playable and durable (my son plays with his Superion and Menasor figures on an almost daily basis) so this set should be just as robust.

Also on display were some *cough* G1 Autobots due to be released as a Platinum collection. 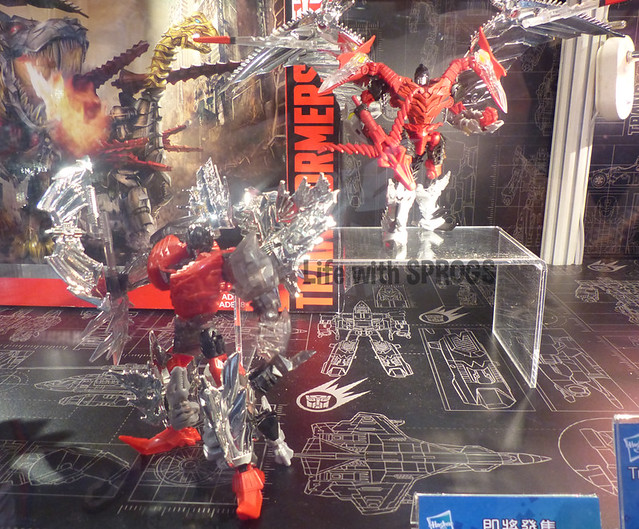 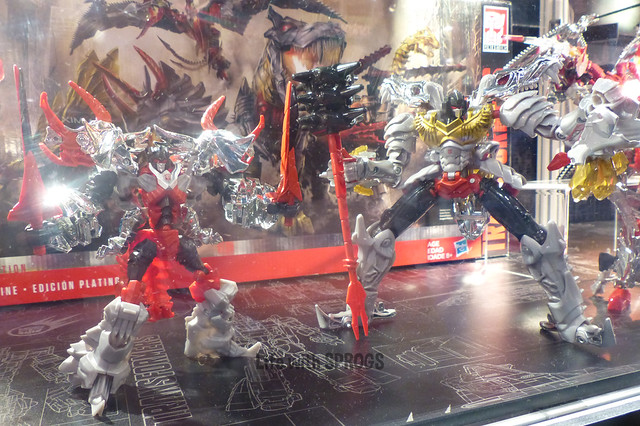 Personally, dressing Age of Extinction Dinobots up in G1 colours with different head sculpts does NOT a G1 dinobot make. This is basically a recoloured version of the Dinobots Unleashed box set. These figures look like something you’d find in the fake toy shops in Sham Shui Po. Sorry Hasbro, despite my son’s love of all things dinobot this set won’t be joining his collection as he is waiting for some retro dino’s – he already has Dinobots Unleashed. 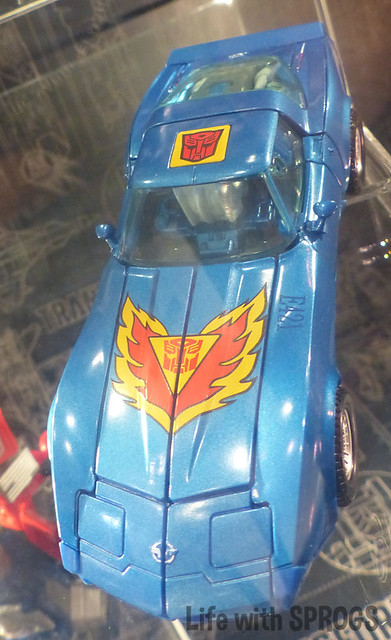 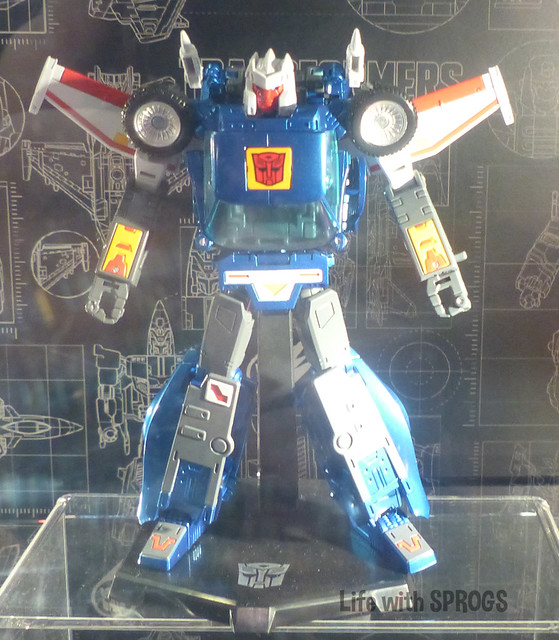 Masterpiece Tracks was also hanging out. (The more I see this figure the more I LIKE/want it!) 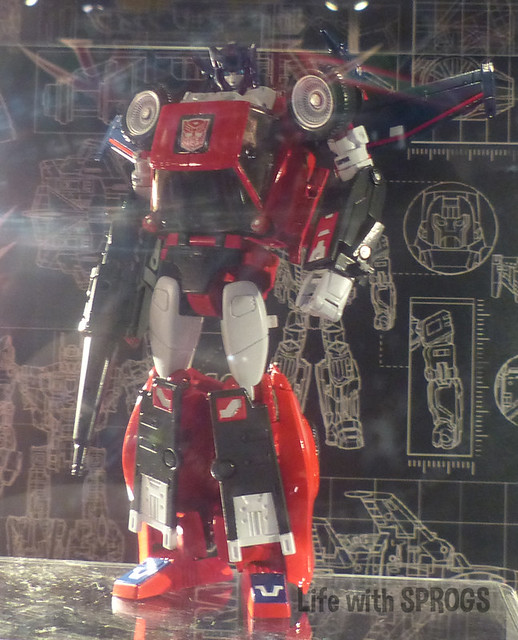 And Masterpiece Road Rage. Correct me if I’m wrong but I believe she will be the first female Masterpiece figure. 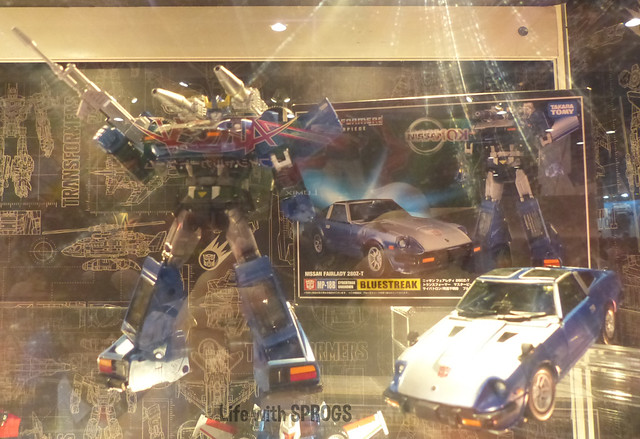 Masterpiece Bluestreak was there too.

Onto the Kidslogic booth despite several Transformers on display the only one that captured my attention was Grimlock. 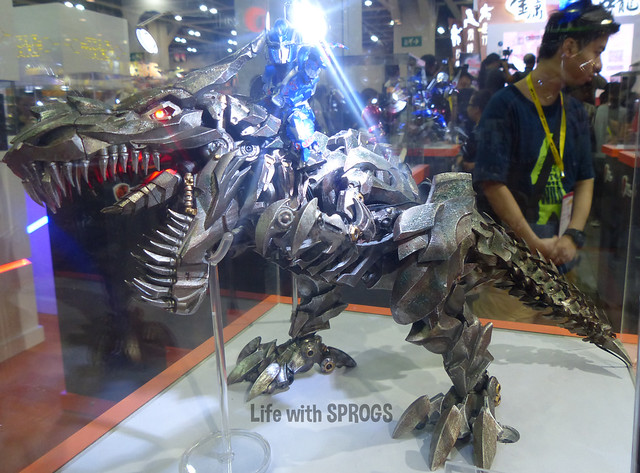 Since Toysoul in December they have coloured him and created an Age of Extinction Optimus mini-figure to ride on his back. Sweet Ride OP! No release date for this guy yet though. Other Kidslogic figures included Devastator in his combined form (doesn’t split into the individual figures)… 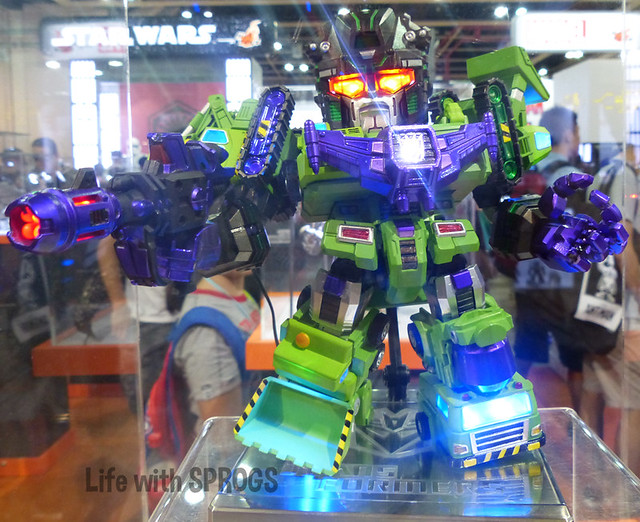 (smaller than his prototype at Toysoul which makes him cute but not impressive enough for me to add to my collection) And a set of mini figures for each of the bots that merge to create him. 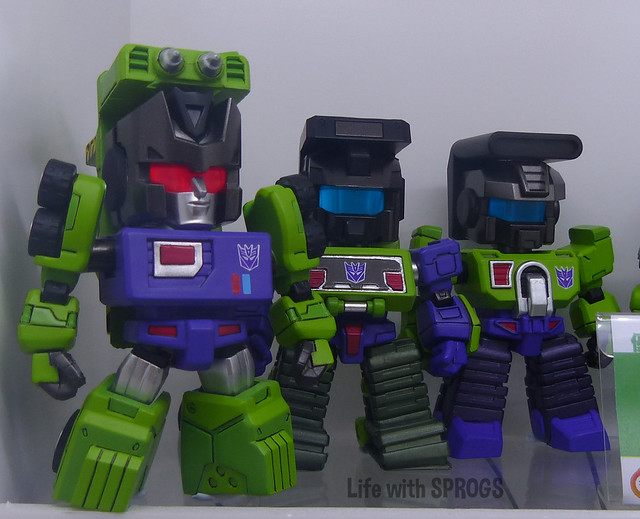 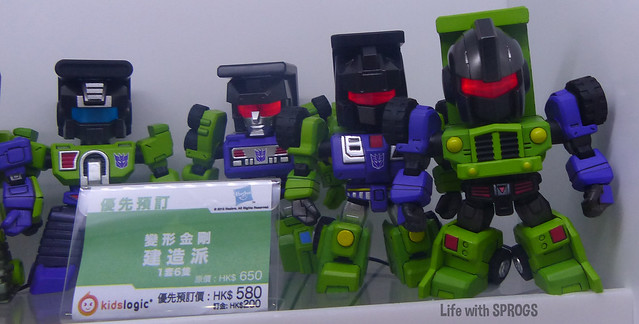 Again, they’re cute, but didn’t draw me in like all the previous sets I own. Kidslogic have been showcasing a raw uncoloured 6 inch Bumblebee figure for over a year now and FINALLY they had a colour prototype on display. 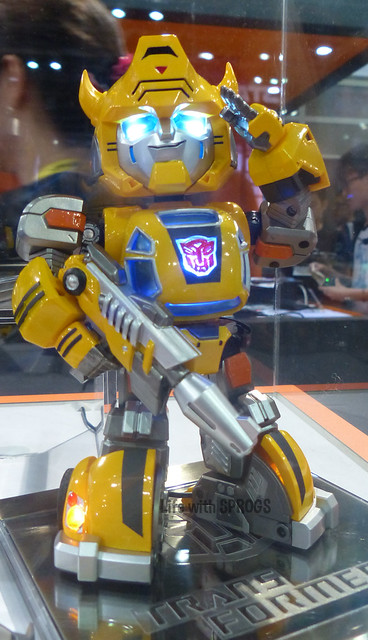 He’s cute but for me he’s a little TOO cheesy and the head feels slightly wrong. I like my G1 Bumblebee to be all sweet and naive and I don’t get that vibe from this guy. Having said that Kidslogic also had THIS on display… 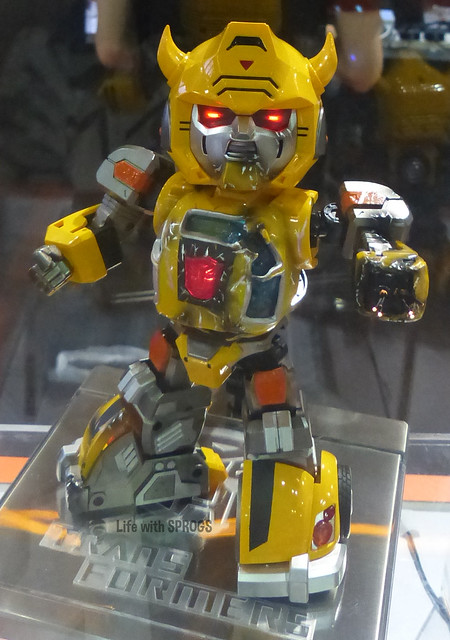 And I’m not sure whether they were going for battle damaged Bumblebee or dark energon evil zombie Bumblebee. Either way this figure is way too creepy for my liking whatever it ends up being. It seems at least one company every year goes for the odd out of character Transformer. This year Kidslogic certainly win that title with their Bumblebee (last year it was Hot Toys).

Let’s move on to Herocross. They had a couple of Optimus Primes on display as well as an Age of Extinction Bumblebee. 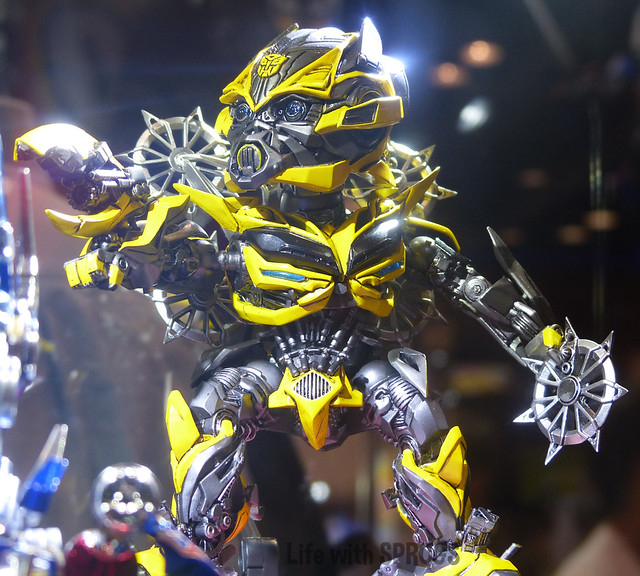 Now, Bumblebee isn’t my favourite character and I’ve never been a huge fan of his robot mode in the movies but I do have to say this little figure is impressive. It certainly captures the essence of the Age of Extinction Bumblebee in a cute but not too over the top way. 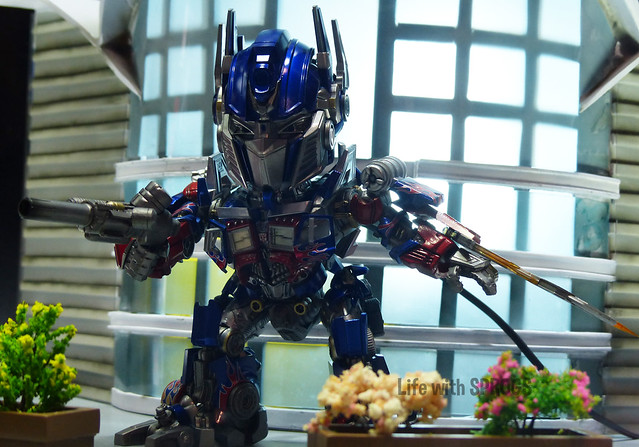 I’ve been quietly impressed by the figures coming out of Herocross over the last few months. They have nice attention to detail and fabulous articulation. I’ll be reviewing their Optimus Prime when time permits so stay tuned for that if you want a more detailed experience.

Apparently there were a couple of other Transformers figures at the show but we didn’t find them this time around. Crowds were definitely up on what we experienced last year. Not as many Transformers to see this year (understandably) but still represented enough to keep fans happy.

Now – did anyone see where I parked my 1/6 scale Millennium Falcon??