Last year Hasbro ran a series of voting amongst their fans via their Transformers mobile app to help design a “fan-built” combiner. The multiple choice questions gave 4 or 5 options for attributes such as gender, name, vehicle options (VERY LIMITED), rival, etc.

The end result was Victorion – an all female combiner team. Yep – she’s a giant sized chick bot ready to kick some Decepticon tailpipe! As Bethany collects the female Transformers Victorion went onto her “must have” list and after the long wait she’s finally here. Victorion has left me intrigued, excited and nauseous all in one. 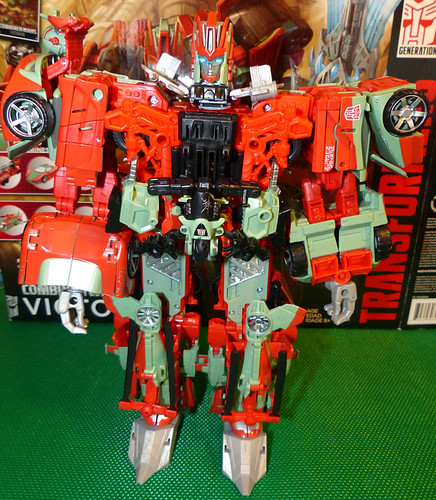 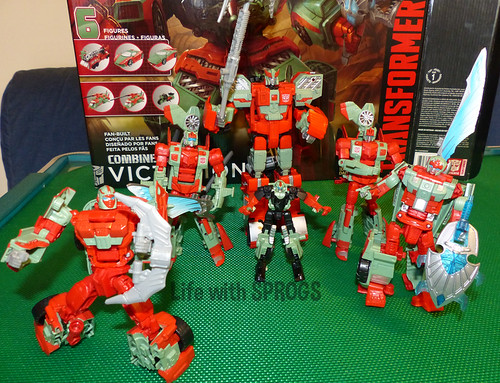 Her colours are horrendous. Light snot green and overpowering orangey-red with a splatter of silver. The colours are worst when looking at the individual bots and vehicular modes, with her combined mode offering a better balance. But still – who thought of these colours? More concerning to me – the colours are the worst possible combination for colour blind kids who see this figure as grey and red. Nice one Hasbro! It’s the first Transformer we’ve ever had a colour blind issue with.

Victorion’s individual vehicles are all reused moulds of previous toys as is much of the Combiner Wars line. 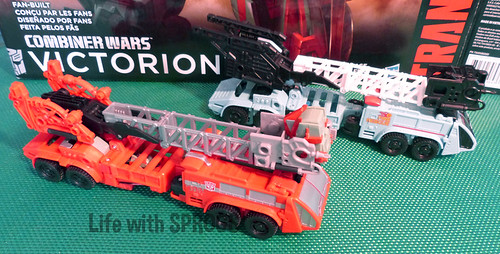 Her torso is made up of Pyra Magna – an extendable ladder fire truck. She’s a nice figure based off the same design as Hot Spot (in the background). The vehicular modes are identical other than a few asthetic features and the combiner head being more prominent on Pyra’s ladder. 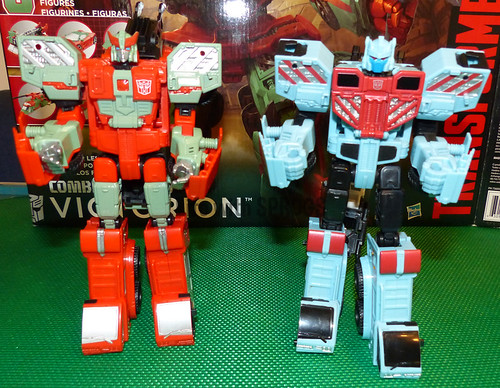 I particularly like the detail of her hands compared to the “boy” figures. Whilst the fingers don’t move individually her hands can grip things. Something poor Hot Spot will never be able to do no matter how hard he tries. 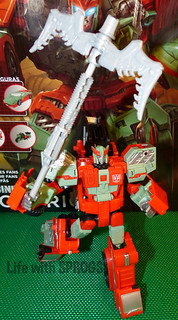 She even has a giant axe (?) to beat annoying bots over the head with!

Noice! I have no idea if it is an axe or a pickaxe or a boomerang on a handle but it is ridiculously oversized…

She has the same articulation as all the other Combiner War figures, as do all her “sisters” so I won’t dwell on it here but suffice to say she measures up to the boys and has nice stiff joints. *chuckle*

She’s the chick in the middle. Aside from colour she’s nothing new or special. 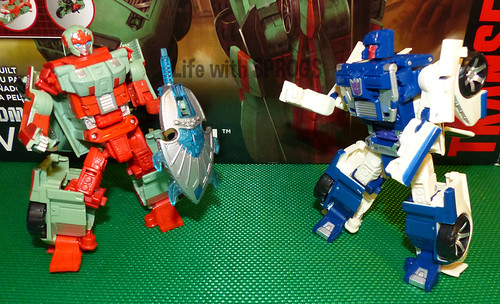 Transformed into robot mode her head is a little odd but reminiscent of Windblade and her torso differentiates her from boybots like Breakdown. 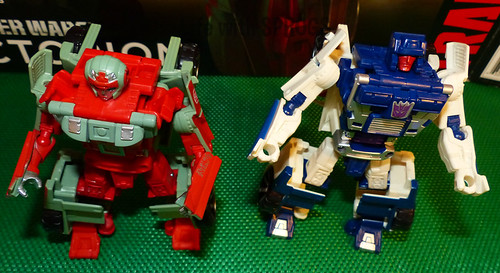 Again, like her big sister Pyra she has hands that can hold and slide objects in an out (did I really just say THAT about a Transformer?!). The hands don’t move but at least she isn’t stuck in grasped fist mode like the boy bots. This top down view should make the difference in hands pretty obvious.

Jumpstream is the other car in the team, sharing the same mould as Dead End. 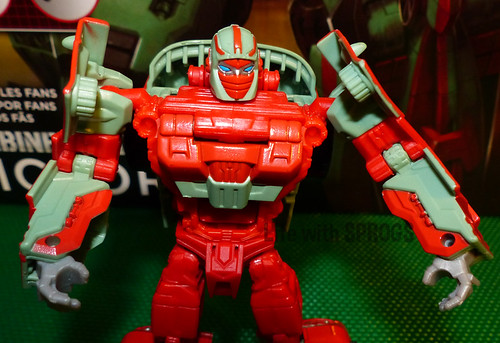 GAH! – THIS is what happens when you let Optimus Primal and Botanica spend too much time together peoples! It ISN’T pretty!! However like all the other figures in the set her hands give her a nice touch and would make her far more enjoyable in bot mode if it wasn’t for that face.

Victorion’s legs are made of twin helicopters Skyburst and Stormclash which share the same design as Alpha Bravo and Blades. To be honest it is hard to tell which is which in vehicle mode as the difference in pattern between them is almost negligible. 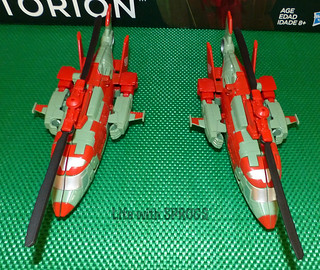 Can you spot the differences?

Maybe more obvious in this picture with Alpha Bravo in the middle?

I have to admit I find it odd that they duplicated 2 of the same vehicle in a combiner, especially a helicopter. Personally I would have preferred 2 identical jets. However in combined mode the matching choppers do make Victorion look more symmetrical and perhaps that was what the designers were aiming for. 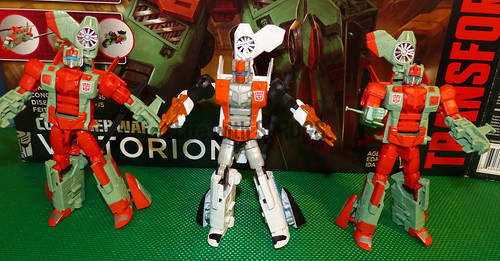 Aside from their faces they’re also pretty similar. Stormclash could also be Alpha Bravo’s twin given how similar their faces are.

Last and by far the least is Rust Dust.

She’s a legend sized motorbike that attaches to Victiorion’s chest. I don’t have legends Groove to compare with but she is simple to transform and easy to place onto Victorion.

Before I go on I’ll just mention that all of the figures in this review were transformed and combined by Mitchell (my 9 year old sprog) even though he’s not a fan of girl bots. He loves the Combiners Wars line and the figures are the perfect balance of challenge and fun for kids his age.

Victorion as you would expect comes together just as easily as all the other Combiners since the connections are nothing new. 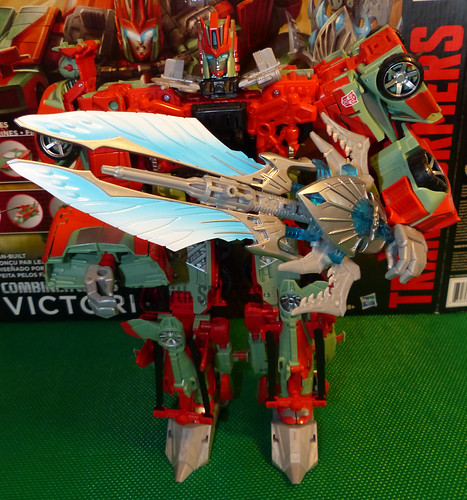 Her face and head are impressive and work really well with the combined mode. Her hands and feet are new to the combiner line and MUCH nicer than the gun looking clunky hands of the boy combiners. And her sword… 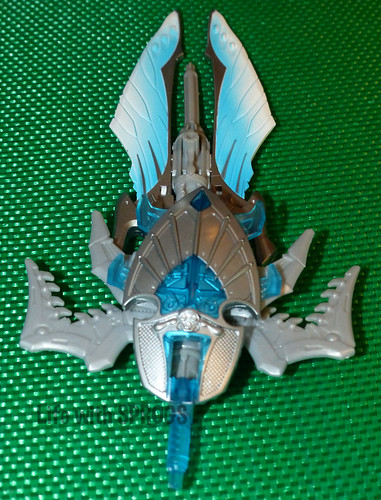 It’s imposing and majestic. The blue makes the garish colours of Victorion bearable when she wields her sword. The downside of the weapon is Victorion can’t hold it in her hands. It has to be inserted in a hole towards the back of the hand. From a distance it kind of looks like she is holding the sword I guess.

How does Victorion stand up against the other figures in the Combiner Wars line?

You decide for yourself. Here she is with Superion, a vehicle and a regular sized bot to give you a comparison. 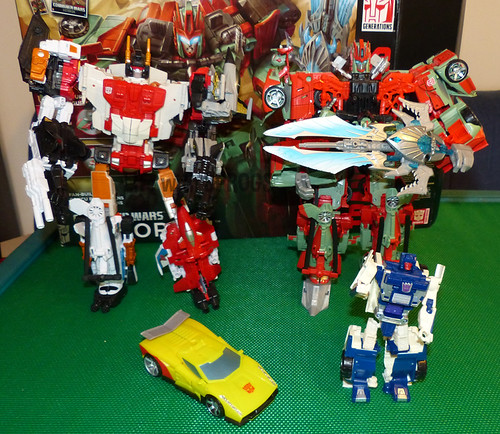 Colours aside she’s a nice looking combiner. Her individual robot and vehicles aren’t anything special and because of that I suspect she’ll be spending most of her time in Combined mode.

I like the idea behind Victorion. I like that she gives girls such as my daughter their own Transformers and their own combined figure to enjoy BUT in reality who aside from collectors will know who she is or think to buy her for their daughters or sons? I’m certainly curious to see how she sells and if she is marketed in a way that can allow more girls to enjoy a franchise that genuinely can be more than meets the eye for both boys and girls.

What do you think of Victorion? Fab or Fail?