I know how lucky I am to live in a city abundant in relatively easy access to toys, especially for collectors. However it isn’t the only place in Asia renown for toys. So when the opportunity arises (especially if I am away without the sprogs) I love to go on the hunt in other cities and see what they have to offer.

I was really excited to be hitting the toy hunting trail in Taiwan last December when I had a few hours to spare. When you look on places like eBay often the best prices (for Transformers at least) are found from Taiwanese sellers so I anticipated Taipei would have toy shopping on par or better than Hong Kong.  With a list of recommended stores from a local collector I was ready to explore!

If you are used to Asian style public transport MOST of the places I visited are easy to find as they are close to a train station (with the exception of Toys’R’Us).

This underground mall is HUGE. It is more like an underground market and each section specialises in different things. I was told the toys were to be found from Y13 to y19 so onward I went amazed at how much STUFF was in this underground area. Alas barely a handful of Transformers were to be found in Y13 to Y19. None were recent (only DoTM or Transformers Prime) and only in 3 of the many MANY shops. Fake and real Kidslogic figures were more common however a lot more expensive than in Hong Kong. What these toy stores did have in abundance was a huge selection of Japanese Anime figures at prices on par to Hong Kong.

Next on the list were 3 stores recommended close to exit Y13 above ground not far from the underground mall.
1. 東東玩具百貨 located at No.54, Taiyuan Rd. Datong district, Taipei (台北市, 大同區, 太原路, 54號) – Had some Rescue Bots, those figures that fight (I don’t remember what they are called as they look nothing like Transformers to me) and old AoE Kre-o. They also had a Robots In Disguise 2015 plastic sword that hasn’t been released in Hong Kong but it was expensive for such a small piece of grey plastic (around AU$40). Overall selection was ok but the prices weren’t worth any purchases. 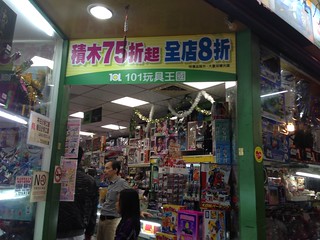 They had Robots In Disguise 2015 figures, some recent Combiner Wars figures, Kre-o sets and lots of Micro Changers. This store was like a run down version of a AU/NZ Toyworld and again the prices weren’t cheaper than what I pay in Hong Kong. 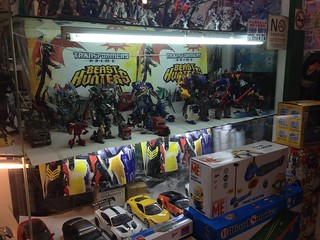 They also had a Transformers display in their main window. A little out of date but nice to see Transformers getting some love.

Ironically just before you see this store there is a KO store beside it which had fake Combiner War figures for Taiwanese$39 (AU$1.65) each. They looked terrible and the owner got quite angry when I took a picture of them but as he couldn’t speak english and I didn’t speak Mandarin he gave up and told me to go away (which I was anyways). 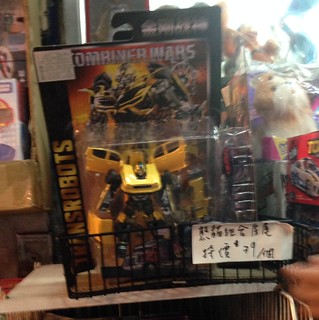 3. 芃芃精品玩具批發 located at No.100, Taiyuan Rd. Datong district, Taipei (台北市, 大同區, 太原路, 100號) – Probably the best of these 3 stores. Hidden on back shelves to one side of the store they had loads of DoTM and Transformers Prime figures (pre-Beast Wars), some FOC figures as well as a few Combiner Wars and RID2015 figures. Unfortunately there were no recent releases. Prices were again on par with Hong Kong.

Next place in my toy hunting adventure was a Toys R Us store.

Toys R Us, No.28, section 2, Xinsheng North Rd., Zhongshan district, Taipei (台北市, 中山區, 新生北路二段, 28號). This is apparently the largest Toys R Us in Taipei and I’d believe it. 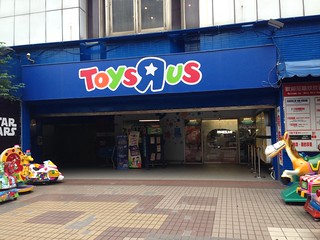 It is a warehouse on the bottom of an apartment block with aisles well spread out and a decent area dedicated to Transformers. This whole store was fun to walk through in general (but maybe that’s because it reminded me so much of the Toy Warehouse we had in Auckland when I was a kid). It was like being in a Toy R Us of old with things to not only buy but also see and appreciate. Unfortunately this store is not easy to get to via the train network – I had to catch a taxi to and from here as there isn’t much else around. 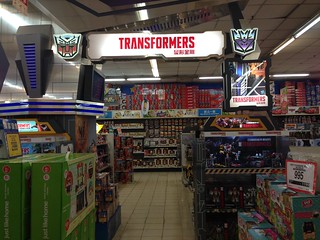 They had Combiner Wars (the same selection as Toys R Us HK), Rescue Bots (something hard to find in HK), Robots in Disguise 2015 figures and loads of Kre-o both old AoE and more recent release RID/Battle Changers. They also had Year of the Monkey Optimus Primal (monkey, not dino) but he was REALLY expensive compared to HK. They had several of the AoE box figure sets still at full retail price (and again more expensive than HK). They also had things like Transformers candy and Transformers portable USB devices. I ended up buying some Kre-o from here. Notably I picked up a Kre-o Optimus Prime that I didn’t realise was very rare until later when another collector in Oz pointed it out to me. I brought him because he was Optimus and as most people know I collect all things Optimus. The store gave us a free RID2015 Christmas carry bag when we spent over T$800 on Hasbro items. 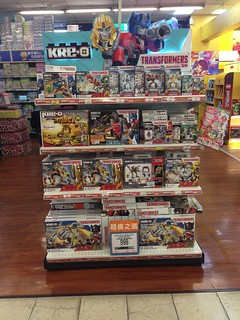 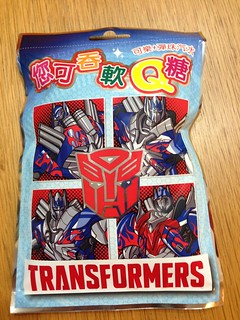 Next stop was in the city centre of Taipei.

Toy World (DingMei Wanju 鼎美玩具), building A8, on the 5th floor (信義新天地 A8 5F) – This is part of a massive multi building department store and very near to Taipei 101. The toy section is large and it had a small but nice dedicated Transformers zone including a human sized AoE Bumblebee display. 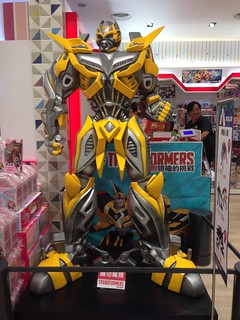 They had lots of boxed AoE sets (however still at full retail price), Rescue Bots and Combiner Wars. Signs on display stated they had sold out of the Hasbro 3 step RID2015 Optimus & Grimlock and only had a small number of the RID2015 Kre-o (the Underbite one was a “limited to 50 pieces” release). This was the only store I found to have Japanese Transformers, ie A few Masterpieces and Legends Black Arachnia. 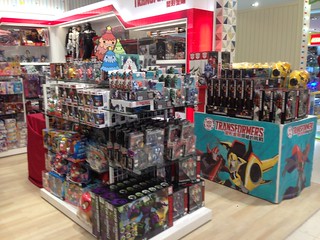 My son has wanted Rescue Bots Optimus Primal – the T-Rex NOT the monkey – for quite some time. We FINALLY found him here. When we asked about his price we were told the Transformers section had a non-listed/no signage 50% off Rescue Bots which was a pleasant surprise even to the cashier and he ended up being an absolute steal. On top of that we were given an AoE Optimus Prime notebook, some RID2015 plastic book covers and a RID2015 Christmas carry bag for free with no minimum spend (only requirement was a Transformers purchase). I loved all the freebies they were throwing at us! 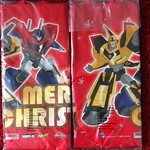 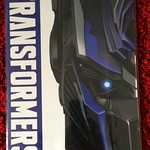 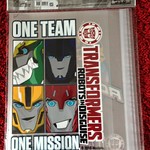 In another section they had Herocross, Kidslogic Transformers and Hot Toys Optimus (Starscream version) at prices more expensive than Hong Kong retail. Ultimetal Optimus Prime was also on display but I am not sure if he was just a display piece as he didn’t have a price associated with him like other figures.
I was able to hit all these stores over a 1/2 day so it wasn’t as intense as Hong Kong (which can take days to go through stores). However overall I was a little disappointed as Transformers weren’t as abundant as I expected, the choices were limited and the prices were generally the same as Hong Kong or more expensive.

We were staying in Ximen so I did take the opportunity to look around there too. Despite several anime stores (including a dedicated One Piece store!) there were no Transformers to be found. 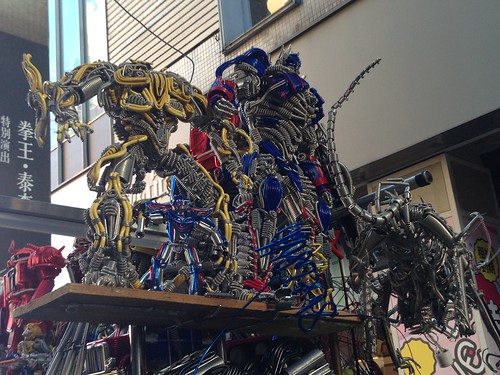 However there was a lady in one of the street/night markets making Optimus Prime and Bumblebee wire art. It wasn’t cheap but it was very cool, quirky and unique. 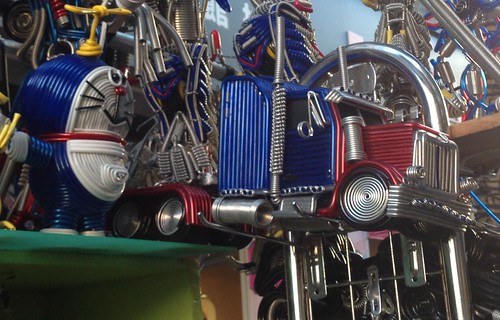 If anyone has other locations I should check out next time I am there please let me know.

Note: This was the current state of Transformer toys in December 2015. As marketing and toys fluctuate in popularity stores may no longer have the big displays they did when I was there.

One thought on “Toy Hunting in Taipei, Taiwan for Transformers”