I got the privileged opportunity to participate in the Hasbro Hong Kong Trial and Play Event hosted at Hobbybase in Mong Kok on the 23rd June 2016.

I say privileged as it was an invite only event and as the only female non-Chinese collector in Hong Kong I was honoured to be invited. 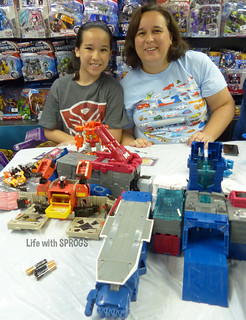 It is always a nervous time for me going to local events. My Cantonese isn’t fluent but I really want to be a part of these great experiences without frustrating those around me. So I wasn’t sure how people would react to my presence. 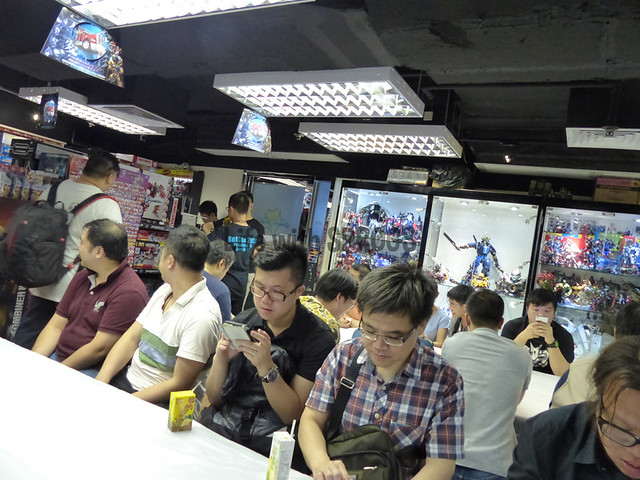 Thankfully my nerves and worry were all for nothing as the other collectors and the organisers of the event made myself (and my daughter who had also been invited) very welcome.

I have to say being able to FINALLY meet and talk to other Transformers collectors in Hong Kong through a setting like this was worth attending just in and of itself.

All the guys I talked to were friendly and interesting and I really hope I get to catch up with more of these collectors again at some point.

The event started with a few nibbles such as pizza and wings as everyone got to chatting. There was a quiet hum of subdued excitement as we were all keen to see what goodies were going to be on show.

I had no idea what to expect other than we would get to see Wave 1 of the new Titans Return figures by Hasbro.

Titans Retun is the 2016/2017 new line of Transformers following on from the Combiner Wars figures. Combiner Wars figures joined together to create larger Transformers such a Devastator and Superion. This time around we have head master figures – the head of the robot transforms into a little robot that can drive/navigate/help it’s main bot as well as oversized city formers even larger than the previously released Trypticon.

Because of all the reveals at this event and the ridiculously large number of photos I took this post is going to be an overview of the event. I’ll follow up with a few posts covering specific figures in detail over the coming weeks. 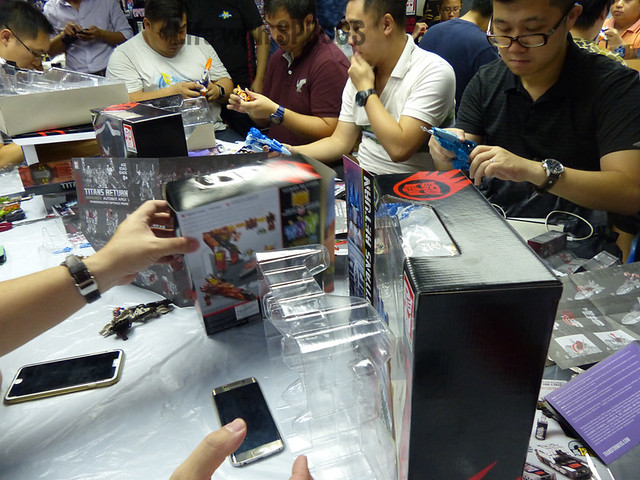 After a short introduction much to my surprise Hasbro brown boxes (cases) were placed on the table and opened revealing they were FULL of sealed mint in box/mint on card toys. I was delighted and shocked when we were told to rip into them and test them out. I eagerly grabbed Power Master Optimus Prime and opened his box with bated breath although I do have to admit I felt a little strange opening a toy I hadn’t paid for. 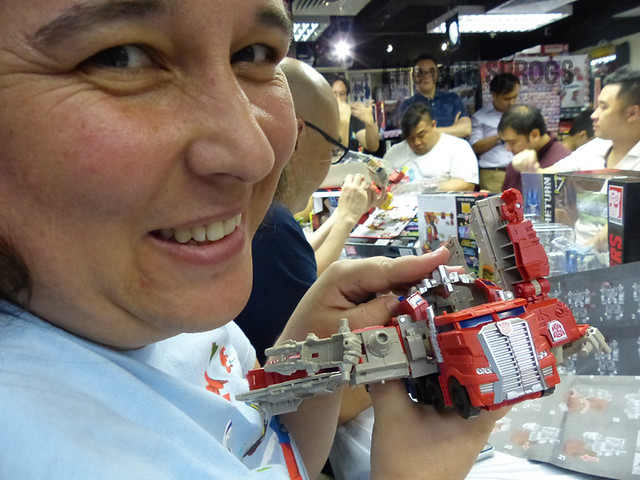 Seeing other people around me opening the figures with the same delight was fun. We all had smiles from ear to ear. Getting to test Optimus before buying him was a novel and interesting experience. On one hand it was great because I was holding an Optimus Prime figure I knew I would have to buy. On the other I got to see how chunky yet small and awkward he was to transform in the first instance.

Meanwhile Bethany was having fun with several of the other figures, quickly falling for Skullsmasher the crocodile head-master and telling me she “must get him” for her collection. 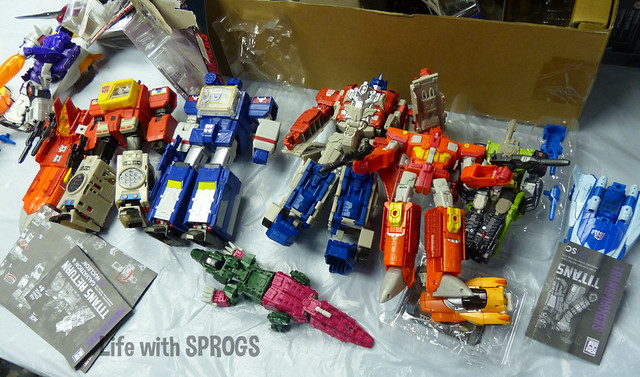 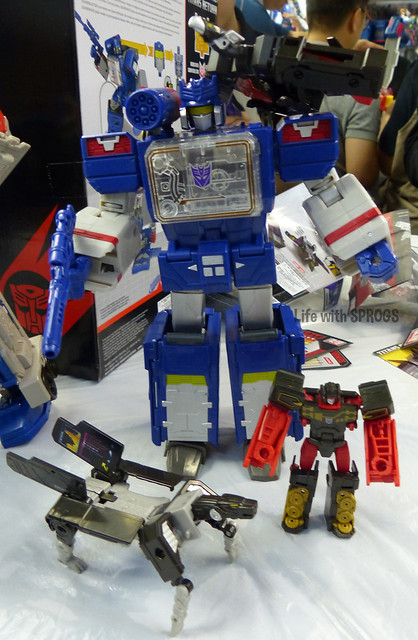 We also got a sneak peak and play with some of the other figures to be released shortly – most notably Soundwave and his tapes. Galvatron and Blurr were also there for us to open and play with. After playing with Soundwave I know that kids my sons age will LOVE this toy just as much as the adult collectors did. He was simple to transform but still had that cool Soundwave vibe to him. My son will be begging me to get him (and his cassettes) for sure! 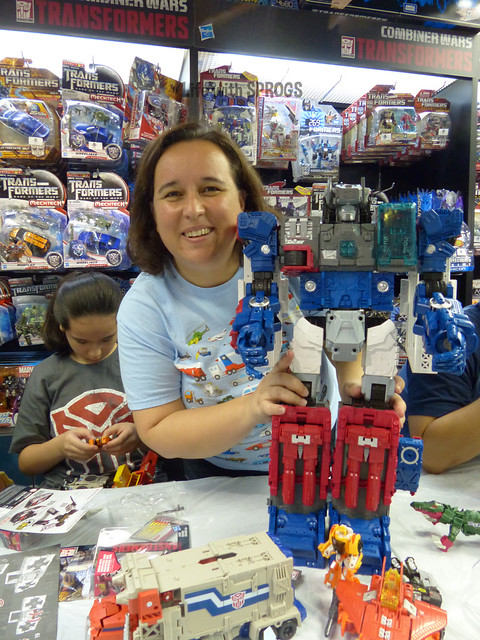 Fortress Maximus the massive city bot was pulled out for us to play with too. Honestly I have to say despite the beautiful box art Fort Max was quite a let down. For such a large toy he was too simplistic and really didn’t have enough of a transformation on him to make him fun. Maybe I was spoilt with all the functionality of Trypticon, who looks small in comparison to this guy but I expected more components and features to him – after all he’s supposed to be a CITY! 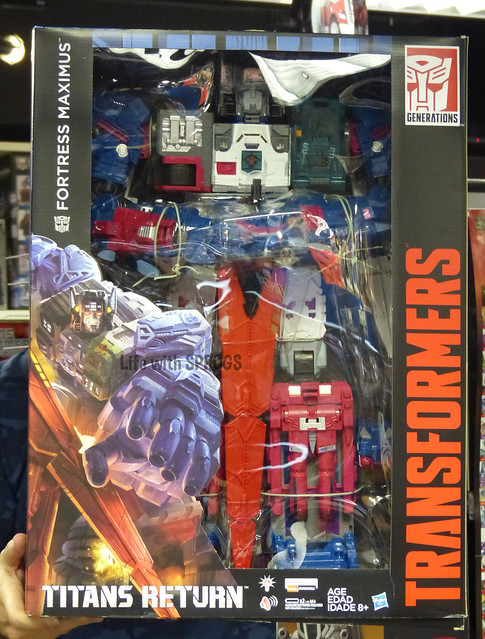 Just to confuse things even more the limited edition San Diego Comic Con version was brought out but it was the only toy on the night not to be taken out of its box.  It comes with a big sword, lovely box display and a hefty price tag. I was grateful to test drive Fort Max as it was one of the figures my kids and I were undecided on. After having played with him in hand I think we’ll be skipping him as an addition to our collection (although the Takara Tomy one may still sway me if it has more to it) and hope the next Titan figure will be more interactive.

The next big reveal of the night was Hasbro Combiner Wars Computron. 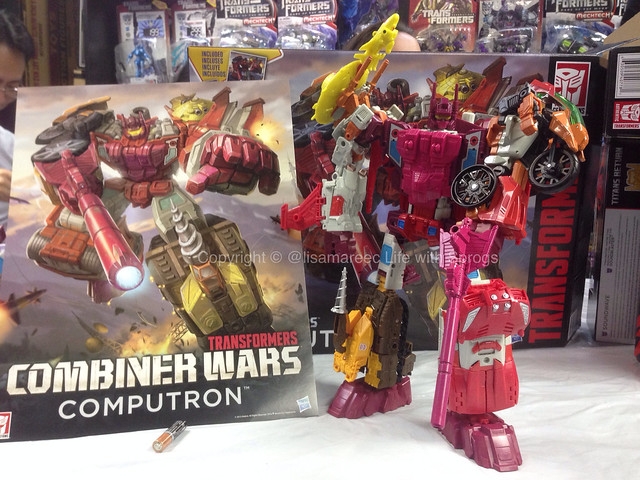 Now I’ll be the first to admit I normally lean towards the Takara Tomy figures when it comes to the Combiner Wars toys but Hasbro’s Computron had me quietly impressed. The fact he was a boxed set with custom hands and feet was a nice surprise. His colours weren’t as garish as the photos that had been circulating and the figures that make him up were all really well executed both individually and when combined. I won’t go into detail here as he justifies discussion in his own post but suffice to say after playing around with the Computron set I think we will be getting the Hasbro set.

Another surprise was the Xiomai Soundwave. He turns from a tablet device into a version of Soundwave and the way he is packaged and comes out of the packaging you can be forgiven for thinking he is an actual working device. 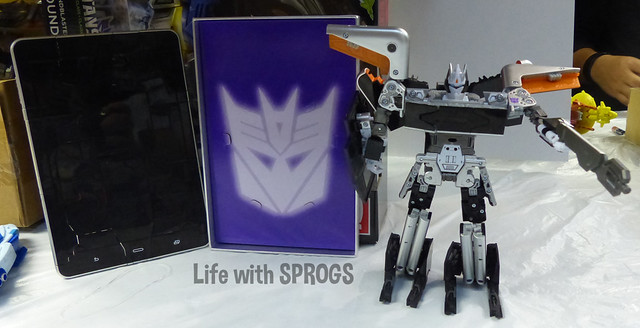 He was an impressive and unusual addition to the night. Bethany loved transforming him as he was so different to the standard versions of Transformers she is used to.

As the reveals kept coming one that truly was a surprise was the San Diego Comic Con 3 set – Sentinel Prime, Brainstorm and Windblade set. 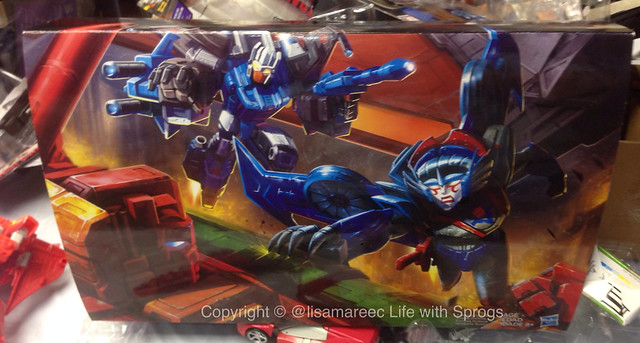 Even more surprising we were allowed to open the set and play with the figures. Windblade is based on her Robots in Disguise figure, not her Generations figure, so her transformation and design is different from previous figures but that didn’t deter Bethany from playing with her, enjoying her as a figure and a plane and then turning to me and telling me I had to get that set. 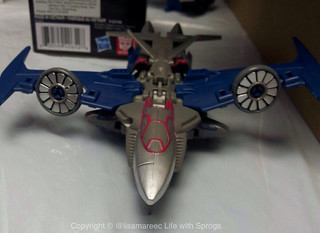 Brainstorm, whilst I know virtually nothing about him, was a real delight to play with. He had me quietly impressed with his subtle colour scheme and sleek design and the Sentinel Prime was much nicer than the standard Titans Return release with several collectors in the room wishing the could buy him on his own instead of the basic version.

More and more toys were revealed from behind a giant Titans Return partition. 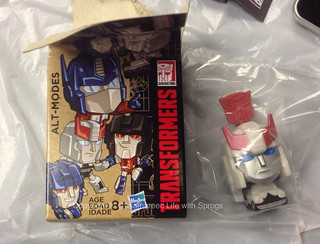 Strange but cute transformable giant head figures were handed out and the latest from Robots in Disguise – Power Surge Prime appeared for us to test drive.

The atmosphere for the night was one of excited chatter and fun. Even Hasbro reps seemed to be caught up in the enjoyment of everyone there. Figures were posed against each other in fun and often crazy ways and ruthlessly tested for pose-ability, transformation and compatibility in size and scale with the other figures. It was a good way to collaborate with other collectors to see how similar or different all our opinions were and perhaps as a sounding board for Hasbro to see how well their new figures will be accepted. It was a resounding success for everyone I think. 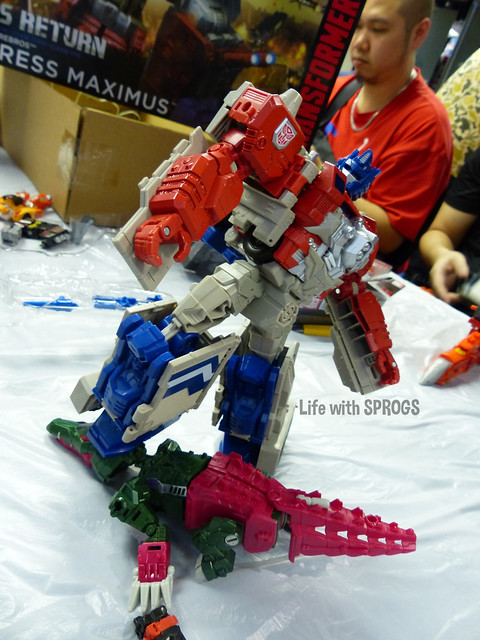 Both Bethany and I came away knowing which figures we will definitely have to get and others that we won’t even bother with. We got to chat with and know Hong Kong Transformers fans better; they aren’t that much different to the Aussie fans I’ve met – all good guys who are passionate about Transformers great to chat with.

What happened to the toys afterwards? Honestly, I have no idea. They were all collected in and put away. I don’t think anyone was stupid enough to steal any of them… that’s not the Hong Kong way. Hopefully the opened toys will be put to good use or maybe donated to charity later on… but your guess is as good as mine.

I really hope Hasbro do more of these events. It is a great forum for fans to get excited, feel involved and feel that Hasbro takes an interest in them. It encourages fans to WANT the toys, even though there will be some that disappoint… BUT that also works in Hasbro’s favour as they get to see first hand an indication of which toys will be a success and which might end up stuck on shelves.

I want to thank Hasbro HK and Hobbybase who closed their store early to host the event for the opportunity to be part of such a unique, fun and interesting night. If you ever get the chance GO to one of these events. You won’t be disappointed.

Want to see more pics of the figures and event? You can check out all the photos of the event here.

Which of the the toys we got to play with are you most excited or disappointed by? Let me know your thoughts!