Wizards of the Coast and Hasbro Australia were kind enough to give us a free Metroplex Transformers TCG set to try out.

What is Transformers TCG you ask?

It’s a new trading card game where you battle bots against bots to see who can take down each others team first. The character cards you use to battle are double sided with a bot mode on one side and their alternate mode (be it jet, vehicle, etc) on the other side. They can flip between modes depending on what kind of advantages you want to use.

My kids and I have had the basic Autobot starter set for a few weeks. I found it great, but that’s because it had Optimus and Ironhide in the set, two of my absolute favourite Transformers. My son was a little disappointed as there were no Decepticons so we picked up a few booster packs and thankfully the first pack we opened had Megatron. This made my son a lot happier. He’s been collecting a booster pack here and there and added a few more Decepticon’s to his lineup.

I allowed my son to open the box from Hasbro and despite his dedication to the Decepticon cause even he stopped, smiled and admired the might of Metroplex.

Metroplex is a titan-sized card. He’s the same size as the large Pokemon cards you get with some of the limited sets which make him AWESOME but hard to keep the actual card protected well. I haven’t found card protectors that fit him in Australia yet. It also means the Transformers TCG has 3 different card sizes you have to manage.

You can get protectors for the other sized cards through game specialist stores easily.

Some people may find the 3 sizes of card annoying but I actually like the differentiation between the characters and the action/upgrade/gameplay cards as it makes it easy to identify what is what for gameplay.

The Metroplex set comes with Metroplex, a Titan card both in physical size and strength, 3 character cards (Slammer, Scamper and Six-Gun), all of whom are used specifically by Metroplex and 40 gameplay cards, some of which give HUGE advantages to the titan as he does battle.

The three character cards can all be deployed by Metroplex when he flips to bot mode much like they would come to his aid in the G1 cartoon.

We played the Metroplex set using the advanced rules as per the instructions that come with him.

Playing as Metroplex gave a huge advantage. With a massive starting health of 35 he was very hard to take out, especially with the basic Autobot Starter set characters, particularly when his activated character cards came into play. 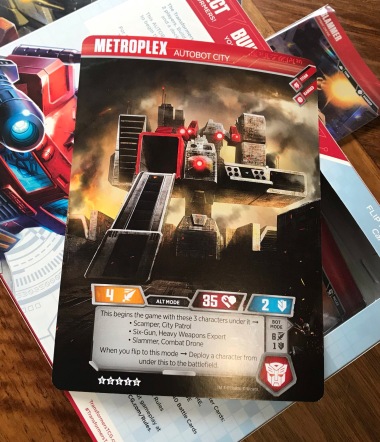 The gimmick ability the allows you to use the additional three characters with Metroplex come in VERY handy both defensively and when on the attack.

I found Six-Gun useful for attack and Slammer advantageous in defense despite the fact his card doesn’t have a bot mode. Not only can the activated characters be used to attack, the can also act as defensive buffers to protect Metroplex from damage if tapped to force your opponent’s attack onto them. Even if they are wiped out in a round they still work out advantageous to the longevity of Metroplex. Combined with upgrade cards Metroplex becomes almost impossible to topple. In fact, no matter what combinations of characters we used, Autobot or Decepticon, we couldn’t bring Metroplex down easily with the range of characters available to us no matter the upgrades we used.

Bizarrely my son found this fun as he loved the challenge of figuring out a way to use his Decepticon cards to bring the mighty titan bot down. At the same time, when he wanted to all but guarantee a win he enjoyed playing as Metroplex.

With Metroplex now on the table I (and my son) would really like to see some Decepticon set packs to genuinely rival the Autobot sets. Trypticon would be a great set to see to offer a worthy opponent to Metroplex and given some of the reactions I had on Twitter Trypticon is definitely a set fans want to see.

The reality is the world of Transformers is so diverse there is a LOT Wizards of the Coast can do with this game if it can generate enough interest. Just the idea of a team of combiners makes me excited for the potential scope the developers of the game have to work with. Here’s hoping they get to keep drawing us in with new and interesting sets and different challenges to continue keeping the game fresh.

If you’re a fan of Transformers you need this set, and all the others, purely for the artwork, let alone the fun of creating your own teams to battle within the actual card game.

If you’re a fan of trading card games I think the challenge of alt-modes and variously sized bots will give enough interest to offer up something slightly different to the standard TCG’s initially. I do feel some people may find playing against Metroplex just too daunting without similarly matched characters to balance things out. I also think the game could become stale quickly if you don’t have enough characters to choose from or if expansion packs are too slow being released.

My 11-year-old son is a sucker for trading card games and so far enjoys the Transformers TCG as much as he does Pokemon. His concern is the diversity of characters but I think as long as Wizards of the Coast and Hasbro continue to release new content and market the game broadly in conjunction with their toys, movies and TV shows they should have the interest to allow for the game and decks to continue growing.

If you’re looking, the Transformers TCG Sets and Booster packs are available from K-Mart, Big W and specialist Card Game stores, probably other stores too but these are the places I’ve seen them so far.

I want to say a huge thank you to Wizards of the Coast and Hasbro Australia for allowing the sprogs and I to try the Metroplex set for free. We are continuing to have a lot of fun with it.

Note: We already had the Autobot Starter set and booster sets which we had purchased ourselves when the game was initially released.

Have you played the Transformers TCG yet? What do you think of it?