This second wave of booster packs expands on the initial Wave 1 set of cards with new characters, battle cards and most importantly the introduction of Combiner and Triple Changer character cards.

Wizards of the Coast and Hasbro Australia generously sent us a free box with 30 booster pack bursting with new cards for us to open.

Introduced in this wave are Combiner characters. For those who haven’t had much exposure to Transformers, Combiners are larger characters created by several smaller bots. Generally 4 smaller bots for the arms and legs with a larger bot for the chest and head occasionally accompanied by an additional bot to reinforce the chest or weaponise the larger combined bot.

Examples of the Combiners you’ll see in this current wave of cards are the likes of Superion, Menasor, Predaking, and newer Combiners from the recent toyline such as Volcanicus (a Dinobot combiner) and Optimus Maximus (based on some of the core G1 characters and Optimus Prime). I’ve always had a soft spot for Superion so it is great to see him in this initial release.

Due to the complexity of combiners, Wizards of the Coast have had to introduce a unique and novel approach to allow for the combining functionality. These cards when folded are the same size as a battle card with a robot mode on one 1/2 and the alt mode on the other 1/2. When opened up to the larger character card size, the back reveals a part image of a larger combiner. If you are lucky enough to collect all the characters needed to make the combined character you’ll be able to unlock and use the gestalt combiner bot and their abilities.

Now I do have to caution here. We received 30 booster packs and did not get a complete set of characters to create one of the main large combiners making the odds of getting a whole combiner a potentially tough and costly process.

We did get 5 of the 6 characters for Optimus Maximus, missing out on Optimus himself. This left my son somewhat frustrated as he was excited by the prospect of using one of the combiners in gameplay. We’ll either have to get lucky when we buy more booster packs or find someone willing to trade at some point.

The simplest of the combiners is Dreadwing as he only required 2 characters to make his combined mode, Dreadwind and Blackwing. We found both parts for him in our box of booster packs. With double the weapon, armour, and utility battle card slots Dreadwing has the potential to live up to his card name as a sky destroyer. 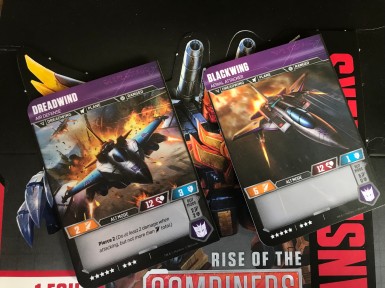 Another type of foldable card in this new wave are triple changers. Triple changers have their traditional bot mode and two alternate modes they can change into. We were lucky enough to find Blitzwing and my son was elated. Blitzwing transforms into either a tank OR a jet. When folded Blitzwing has his alt modes on either side of the card. When opened to the traditional character card size, his bot mode is displayed on the inside face of the card.

Some of you may be questioning the durability of the folding cards and I too had doubts about how robust they would be. I was pleasantly surprised by how clean the folds were and how, at least for now, durable the cards are as they are “transformed” between their various functionalities. Of course, there is the dilemma of how to store them in collector sleeves but I think you should go with your personal preference once you have the cards in hand. I”m leaning towards storing them in their folded positions in traditional card protectors. What about you?

One thing that I love with every single pack we open is the choice of artwork used, especially for the character cards. The character images are fantastic and with the foil on them really do make for a stunning collection on their own. This was the same with wave 1 and I’m pleased to see they’ve continued to put a lot of thought into the character artwork for this wave too.

As well as the gimmick characters we’ve also got traditional non-folding character cards in the mix.

Dirge was revealed a few weeks back by Big Angry Trev. We ended up getting him in our set along with other characters like Novastar, Grapple (who we got 2 of) and Acidstorm. A nice mix of both Autobots and Decepticons.

My son was absolutely chuffed he can make a Decepticon jet lineup from the cards we received and while the disappointment lingers of not getting one of the large combiners the new characters definitely strengthen our lineups and the ability to take on the harder characters like Metroplex.

Overall the character cards have great artwork and the foldable gimmick is a cool novelty, especially for characters who are “more than meets the eye”. The complexity of trying to complete a combiner set with both the logistics of the number of booster pack required and cost involved is a bit of a deterrent and I think as great as the cards are that may frustrate and deter some people. If you are fortunate enough to get a complete combiner I think it will be not only satisfying but also add another dimension to the gameplay ability of this TCG.

Disclaimer: Whilst I was provided the box of cards for free, I was not paid to review these cards and neither Hasbro or Wizards of the Coast have tried to dictate my content. I am grateful to both companies for allowing me the opportunity to test drive the cards with my kids.