Tung Ping Chau is a small but fascinating island possibly as far away from Hong Kong as you can get without leaving Hong Kong. It is literally a few kilometres from Shenzhen and the Chinese Mainland, which is easily visible from much of the island.

That’s China across the water… but I’m standing in Hong Kong… cool ay? (well – it is if you originally come from a country where its nearest neighbour is 3 hours by plane with no common borders!)

From the New Territories (Ma Liu Shui) it takes about one and a half hours on a boat to get there. Despite the long ride the view along the way is quite lovely as you move from the residential towers lining the bay to the green that many people forget is lurking in Hong Kong. If you’re REALLY lucky you might even see dolphins!

When I say this island is small, I mean small. We are talking about an island no longer than 600 metres, no wider than 200 metres and with a total area of just over 1 kilometre squared. From the water it looks like a green aircraft carrier – low and flat. It barely rises more than 40 metres above sea level. Despite its size it packs a lot in and makes for a great day trip or overnight adventure.

The island is part of the Hong Kong Geopark and is surrounded by  its own marine park. In fact, it even has a coral reef that is quite popular for scuba diving and the water is reasonably clear. I came expecting to see some amazing geological structures but ended up discovering this island has a lot more hidden charm than I ever could have expected. 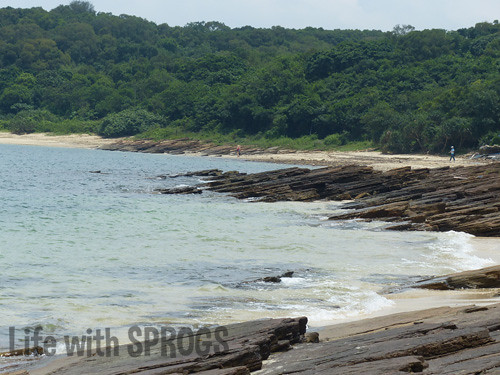 Let’s start with the geology. It is fascinating because it is sedimentary rock laid down in fine layers known as the Tung Ping Chau Shale. Much of this has been upthrust which creates an amazing shoreline. 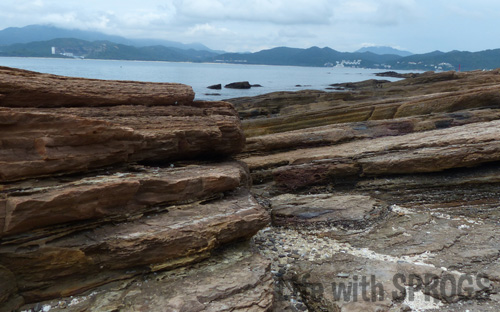 The shapes and patterns are amazing. There is a lot of mineral leeching, and the iron in particular plays some beautiful rusty reds on the formations. 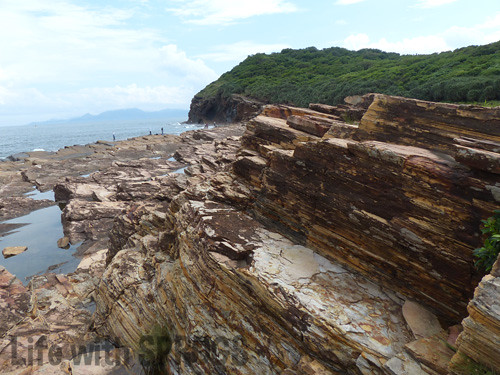 My husband thought I was mad taking so many photos of rocks … eh … perhaps I am, but I find these kinds of natural features fascinating. 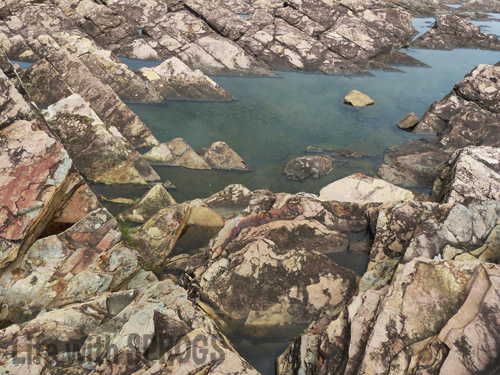 This photo is looking down on one of the rock structures from above into one of the many rock pools. I love how angular nature can be. Can you see the iron leeching in the picture? (Hint: look for rust blotches) 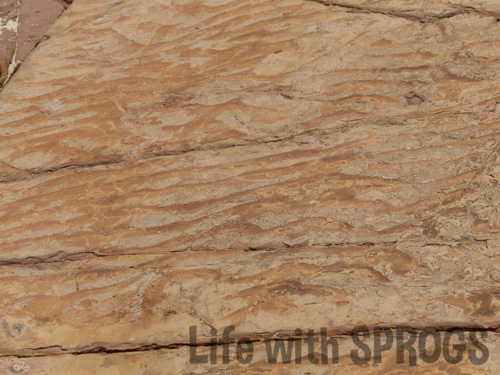 There were even a few examples of ripples fossilised in the shale easily accessible. Amazing to think what the world would have looked like when those ripples were immortalised in the sediment so long ago…

Inland rocks of a different nature drew my attention. 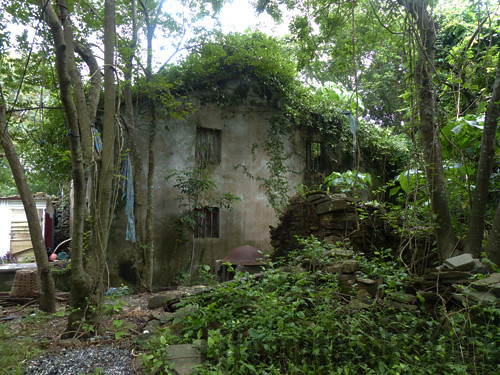 Only a handful of people live on this small island, most only returning on weekends to make some money from the tourists venturing over. Most of Tung Ping Chau is deserted and the homes that have been abandoned are slowly being engulfed by nature.  The house above is encased with concrete. That indicates whoever owned it was relatively wealthy and could afford better protection for their home. Nowadays nature is taking it back as it lies in ruins. 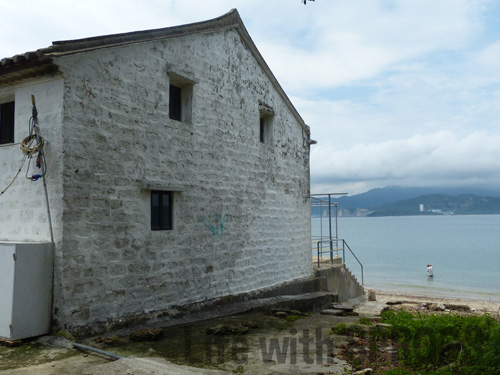 Some of the ruins are rendered and painted white. 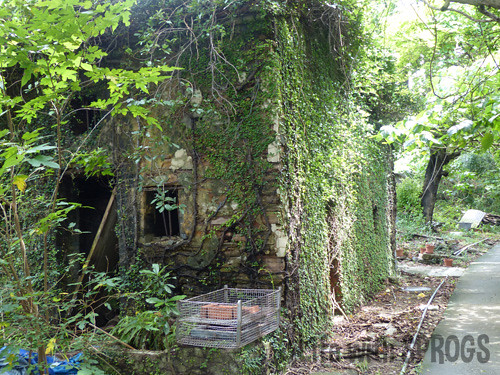 Most of the homes here were made using the shale from the island. Carved into small bits they were meticulously piled to construct the homes. Now they are slowly being crushed and encased by the natural vegetation. 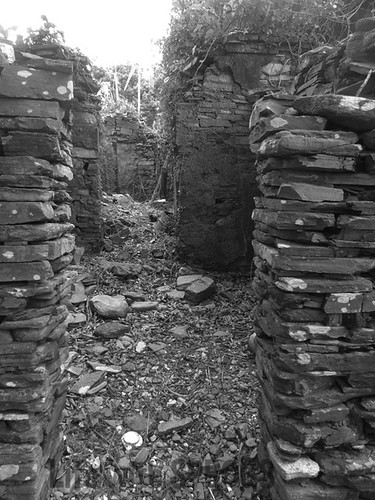 If you like to photograph ruins then this place is abound in amazing potential. 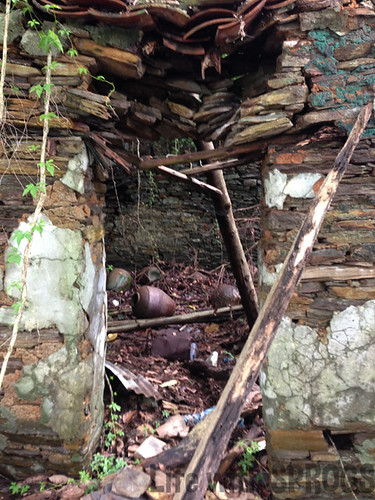 Pots strewn amongst the ruins… 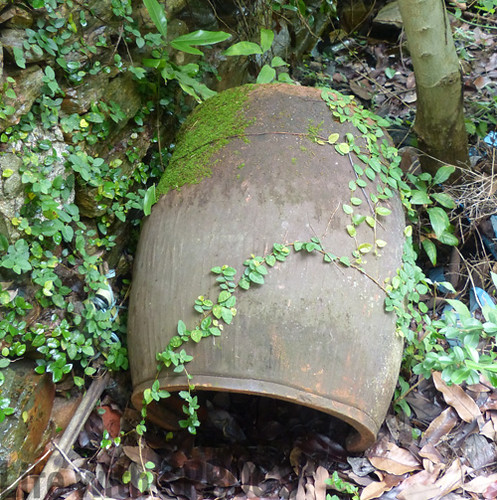 I’m guessing they’ve been there a while! 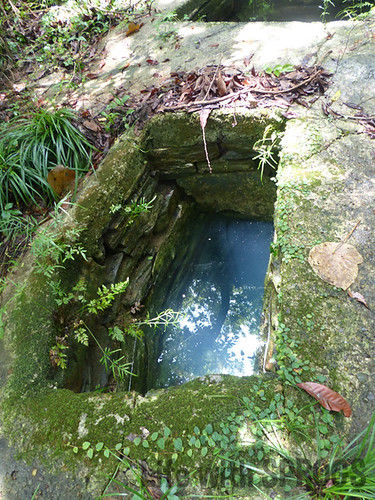 There is no running water on this island, or electricity, so alongside the ruins were often remnants of old wells or water containers. 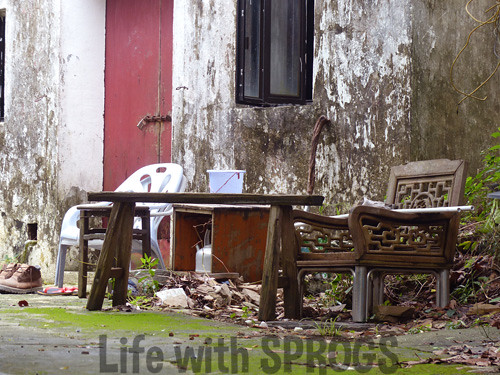 There are a few signs of habitation.

We were fortunate enough to bump into a couple of ‘locals’. The first was hiding in some of the ruins.

I think he’s a common gecko. Feel free to correct me if I’m wrong … I love reptiles but I’ve never studied them and certainly know very little about Asian species.

The other resident we came across surprised us by popping up and crossing the path in front of us.

I think it is a Keelback and non-poisonous, but again, please correct me if I’m wrong.

The copper colouring of this snake was gorgeous. 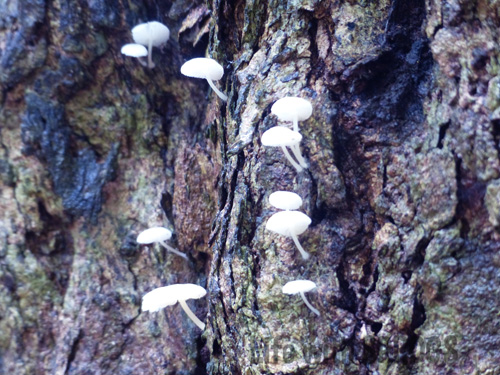 Everywhere we walked on this island we discovered little gems of nature. These fairy white miniature mushrooms were growing on the bark of trees in a mosquito infested section of ruins. 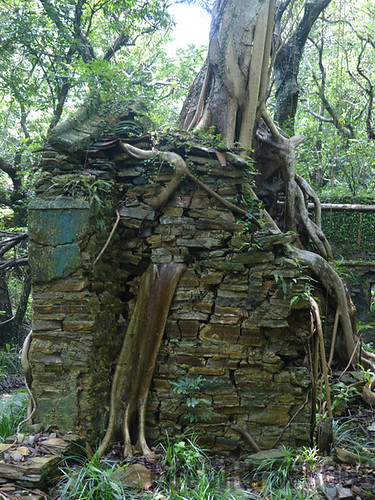 Trees found it no obstacle to grow through the old buildings. With ruins everywhere it was quite addictive to take photo after photo. 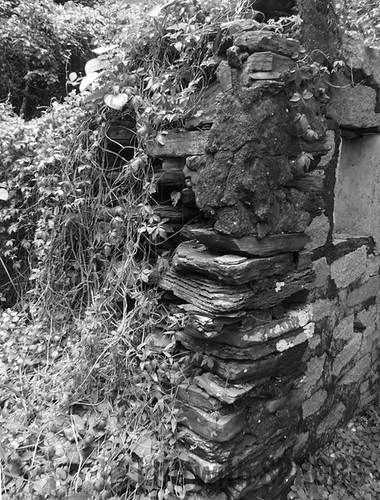 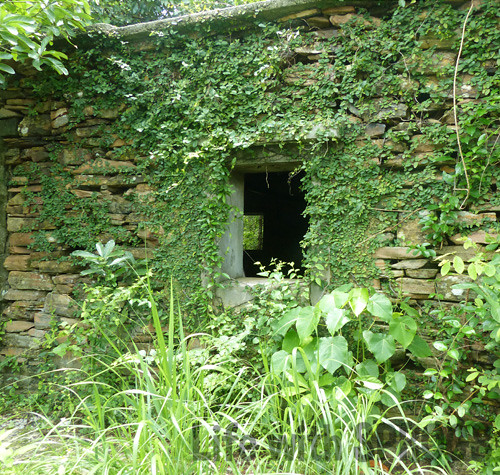 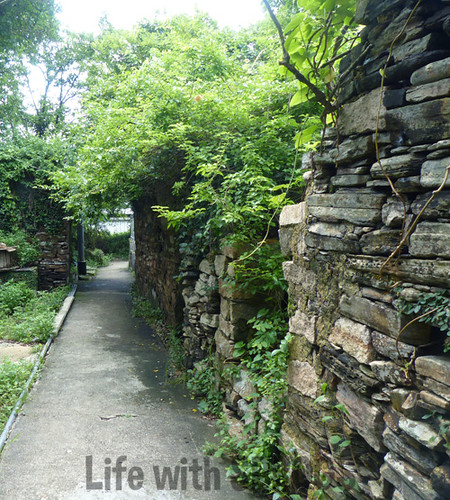 There is a restaurant on the island run by descendants who return on weekends and I have to say their salt and pepper squid was divine. In fact most of their food was delicious and enjoyable given the isolation and difficulty of cooking without power and having to ship in their own water.

If you are going in the warmer months make sure to take your swimmers as there are a couple of beach areas to cool down and swim in should you want to. Regardless of the time of year you go take insect repellent because you’ll need it … and possibly still be bitten!

How to get there:

Limited ferry services leave from Ma Liu Shui (University is the closest MTR station) operate on weekends and public holidays but be warned they can be VERY popular.

I was fortunate enough to visit the island as part of the Royal Geographical Society’s annual trip there which meant not having to figure out what ferry to catch and when. If you have the chance, I would strongly recommend going with a tour such as theirs to avoid the crowds fighting to get on the ferry.

Regardless, If you can make the trip out there you will be pleasantly surprised.

2 thoughts on “Rocks and Ruins on Tung Ping Chau”