Over in Macau there are so many different things for the kids to enjoy. Hong Kong has Disneyland and the Disney characters. The Sands group of hotels (Holiday Inn, Sheraton, Conrad) on Cotai Strip in Macau has the Dreamworks characters.

We thought the best way to see the characters was by taking our kids to a buffet breakfast called Shrekfest.

Character breakfasts … oh yeah! The one at the Disneyland Hotel in Hong Kong is really good and even 6 years on the kids still ask to go back time and again, so we expected no less of the Dreamworks equivalent. Unfortunately by thinking and expecting this we set ourselves up for disappointment… 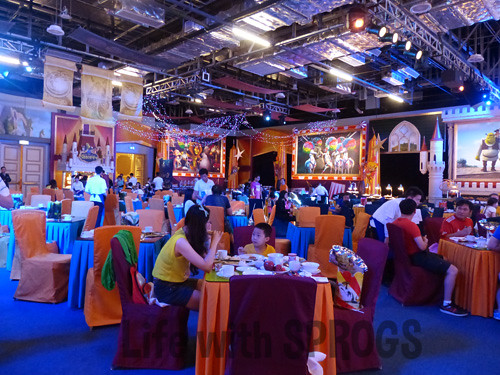 Set up in one of the ballrooms of the Holiday Inn (which is part of the Sands Casino complex) the area is decorated with a variety of Dreamworks animated themes to make a fun and inviting atmosphere in which to enjoy breakfast. 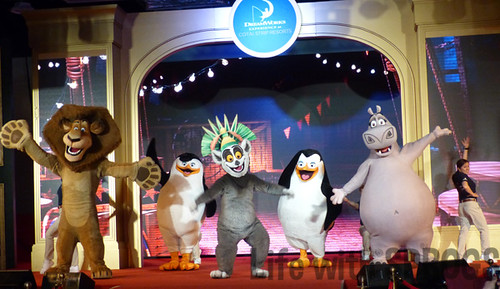 A stage at the far end of the room acts as the performance area for the characters as they make their entrance into the room through a brief dance routine. A ramp down from the stage allows most of the characters to walk down and mingle amongst the tables.

Some characters don’t come down and you have the queue up to have a photo with them on the stage. Kung Fu Panda and Tigress were initially only able to be photographed on the stage so Bethany and her friends excitedly lined up expecting to have a picture each with the characters. I went up with them so the other mums could eat something. We planned to take turns sharing the photographic duties. 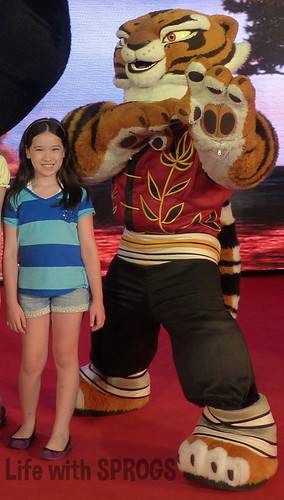 Well … Here is the section of the photo with Bethany in it (Kung Fu Panda and her friends cropped out)… the staff would not allow the girls to have individual photos much to their disappointment, so they had to share ONE photo despite being from 3 different families. The staff were oddly strict. They only allowed ONE photo to be taken despite the fact the ballroom wasn’t even 1/2 full of guests and we were representing 3 families/3 tables.

Even more strange the staff wouldn’t take photos FOR us. I have not one complete family photo from this event (which is a first for us as I think of the plethora of family photos the Disney cast members take for us) because of this. When you asked for help taking a photo the staff just looked at us strangely before saying no and suggesting we give our camera to a stranger to take the photo for us. Odd huh? The poor guy in front of me for Kung Fu Panda and Tigress had a baby and his wife and didn’t know what to do when the staff refused to take a photo. I ended up taking a photo for him (although I pressed the button several times in the hope that he got more than one.); I don’t know about you but having these kinds of memories when your kids are so young are precious, I would have thought the staff would have wanted to help make the experience a magical one not hinder it. 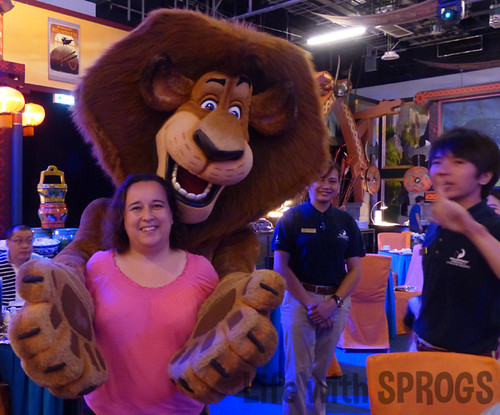 You can see how STRICT the staff were in this photo. Not only is the staff member (and the one behind) IN the photo and not stepping away, but you can see him putting his finger up to explicitly tell us just ONE photo. And one is all I got with Alex… this one. 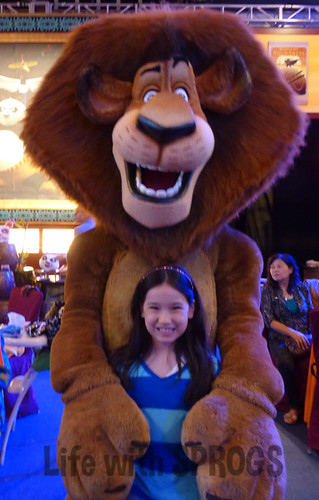 I was lucky to get Bethany to chase after Alex so I could get a photo of her, but again … this is the only picture I got. Far from perfect it is blurry and you can’t see Alex’s eyes properly. That’s the reason I like to take more than one picture with these kinds of things. If we’d been allowed a second photo I might have had the chance to get one I could actually use as a memory. 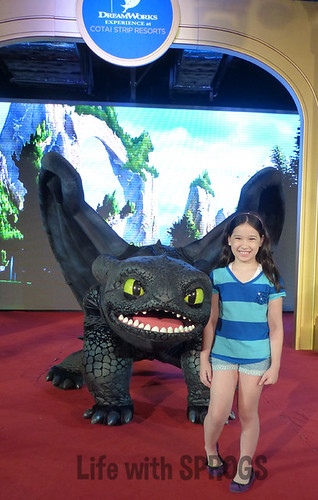 Toothless made an appearance on stage only … I could understand that as the costume would be difficult to manoeuvre around a ballroom full of tables and chairs. Bethany took the opportunity to see him but Mitchell found the idea of walking up onto a stage too scary. Thankfully we were able to find Toothless in a less confronting environment (for FREE) later in the day… more on that in another post.

You might be noticing I haven’t put any pictures of Mitchell up … well that would be because the ONE character he wanted to have a photo with, he never got the chance to. We did the right thing and stayed at our tables waiting with patient anticipation for the characters to come by so we could get a photo with them. We expected every character to come to our table (like they do at Disneyland). Mitchell isn’t much of  Dreamworks fan but he LOVES the Madagascar Penguins… who doesn’t right? When he saw Skipper come out he was so excited, after all he was going to get to have a cuddle and photo with the illustrious leader of the Penguins himself. He waited at the table expectantly. He watched enthusiastically… and he waited.

Having experienced several of the characters not stop for us to take photos (Shrek and Fiona whisked away without even stopping for us and we had to literally grab Puss’N’Boots to stop to get a photo before he too rushed out the doors) we asked the staff “Will Skipper come to our table?”

“This is the ONLY character our son really wants a photo with can you please make SURE he comes to our table.”

“We will let them know. He will come. Just be patient.”

Mitchell bounced around excitedly as Skipper drew closer… and then, Skipper was pulled past my son and out of the ballroom without even a wave as the character disappeared all together. Mitchell’s face dropped in an instant and we could see the tears he was fighting to hold back (given he was there with friends from school he didn’t want them to see him cry in front of them). He watched longingly to where Skipper had walked out willing for him to return. We were heartbroken for our little boy.

We pulled a staff member over and asked what was going on. We told the staff we had specifically asked for Skipper to stop for our son AND that the staff had said they would make sure he would come. We were then told that Skipper would be back. So we told Mitchell to be patient and that Skipper would return.

Other characters came and went. They didn’t stop at all tables and it seemed we were being missed more often than stopped at unless we chased after the character ourselves. We were starting to get annoyed. Skipper hadn’t returned and Mitchell was being so terribly patient, which as many would know for a 7 year old a REAL challenge. We asked if he wanted photos with any of the other characters to which we got a resounding “No, only Skipper.”

We asked the staff again as we saw the time and characters slipping away, “When would Skipper be back? Our son was waiting because we’d be told he would return.”

Eventually and reluctantly the staff told us that actually he wouldn’t be coming back. In other words, we had been outright LIED to by the staff. I was pretty angry at this point and asked to see a manager.

The staff nodded and toddled off, but no “manager” came to talk to us. I’d hardly eaten any breakfast not wanting to miss talking to the manager and making sure no more characters simply rushed on by my kids. As time ticked on I asked to see the manager… AGAIN. Staff shuffled off but no “manager” came to see me. The show and character greeting ended… we had STILL not seen a manager. I’d asked 3 or 4 times at this point. I’d been waiting at least a 1/2 hour  now… Both my husband and I were pretty livid with the stall tactics.

We had been lied to, and now we were being avoided. We could see the staff hovering and guessed they were hopeful we would just leave. I’m a stubborn little kiwi… I was going to sit there all day unless they got me a manager, and NOW!

Eventually realising they needed to have someone come talk to us, one of the MC’s came over. You could tell he didn’t want to be there and the lip-service began. He nodded and apologised (although his apology lacked any sincerity) and even more surprisingly he offered to do nothing about it other than let us be first in line to meet the other penguins (Riko and Kowalski) at another venue where one could meet the characters for FREE anyway. If we’d known we could have met the characters for free we wouldn’t have bothered with the Shrekfest. I came away feeling incredibly ripped off and upset. There was no offer to bring Mitchell back to meet Skipper at a later session, no offer to make up for the LYING, no compensation for the disappointment that had been caused and I felt sad and angry for my son. For an event that rated itself as something special for kids it was anything but for my little man.

So, to summarise, Dreamworks characters come out on stage, wander around but don’t come to every table. If you do happen to ‘catch’ a character you are only allowed one photo (regardless of the size of your group) and the staff will not help you take any photos. Sound like fun to you? 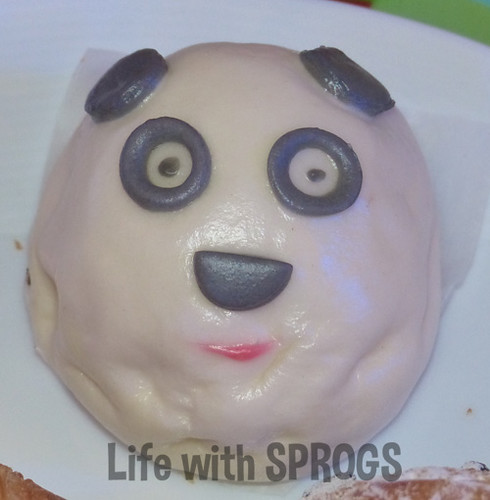 Characters aside the food was okay. Not great, but for the most part not terrible. It was typical buffet breakfast food. There was Asian breakfast staples such as congee and dumplings. Continental and Western breakfast choices including an egg station, fruits, cereal and pastries, waffles and pancakes. Some of the dishes were cute. Panda red bean steamed buns for example. There were Gingy gingerbread men, unfortunately they didn’t restock them so by the time I went to get one they were long gone. The thought to incorporate them with the Shrek theme was one of the few clever things about this shamozzle of a “show”. 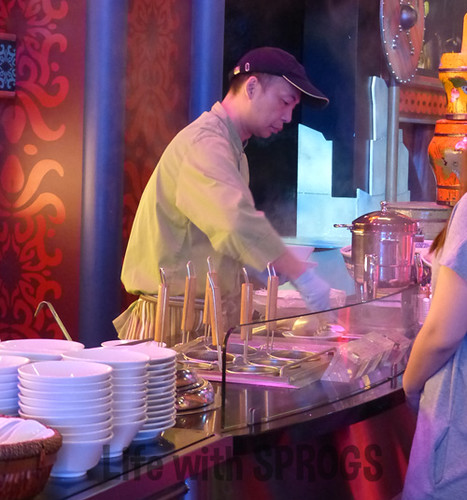 Best food in the buffet goes to the fresh “made while you wait” noodle soup station. The beef brisket noodle soup was fantastic according to several of the people in my group who tried it. I personally tried the fishball noodle soup and it too was very tasty.

If we’d known how disorganised and unprofessional the Shrekfast would be we wouldn’t have gone. I felt completely ripped off that I had to pay for my son to be teased and lied to. I felt the characters were difficult or impossible to access and that the one photo per group rule was absolutely ludicrous. I couldn’t and wouldn’t recommend this buffet to anyone, especially those with kids.

If you do insist on torturing yourself by going then make sure to chase down the characters you want photos with. As much as I normally wouldn’t encourage something like that I would hate to see anyone else have their child as upset as Mitchell was during the event…

Alternatively, go see the characters FOR FREE at Paradise Gardens at the Holiday Inn (post on that coming soon).

One thought on “Shrekfest – What a Troll!”