Now the World Cup is over, Telford Plaza has quickly updated their display with a mini Transformers Expo to compliment the giant Bumblebee over in Telford Plaza 2. If you or your kids are fans of Transformers and live in Hong Kong then this is a mall worth visiting to immerse into the past and present of the Transformers franchise. 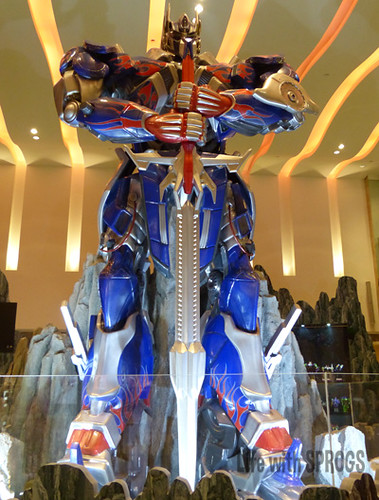 Optimus Prime, albeit a smaller version of himself, stands proud in the middle of the display showing off his sword from Age of Extinction. 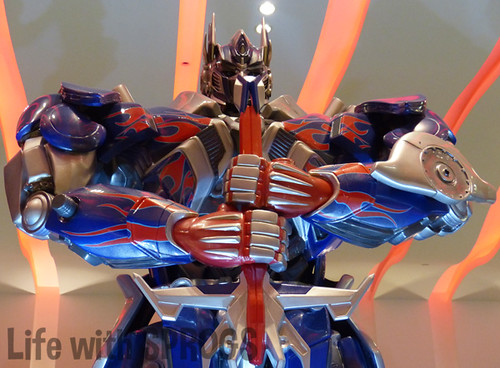 At the Hong Kong Ani-Com the other day I couldn’t help but ask the owner of Kidslogic if they had anything to do with this statue as his style is very similar to the one they had on display at the Ani-Com. Indeed the owner admitted the statue at Telford Plaza was created by Kidslogic. 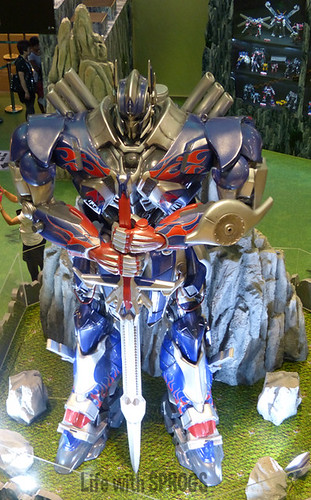 From above it is difficult to appreciate him as he is at an awkward angle. He is certainly best viewed from the floor he is stationed on. 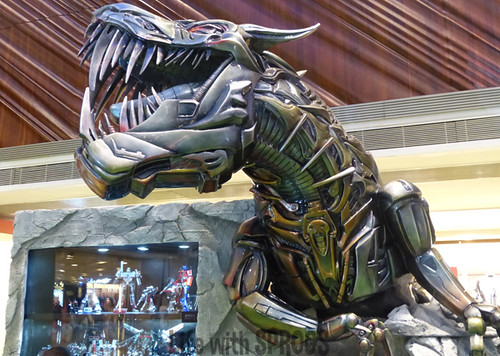 Optimus’ trusty steed Age of Extinction Grimlock is also there, clawing his way out of one of the display cabinets. 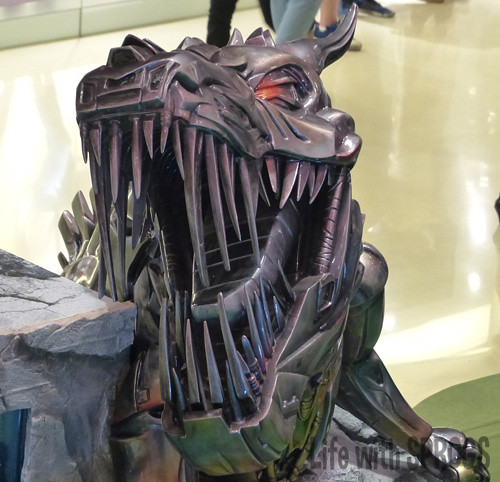 He looks pretty brutal close up despite his small size (relative to what his real size would be). 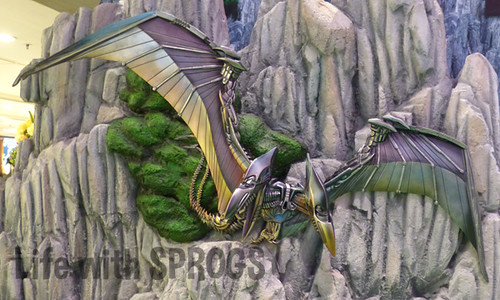 Strafe the two headed pterodactyl was flapping about near a small Microsoft gaming area promoting Transformers games. Personally I loved the fossilistic effect of him all but flying out of the rock face… 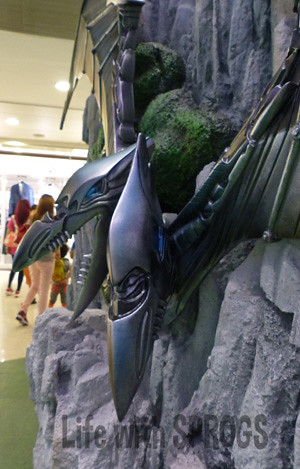 Quite literally flying out of the rock. 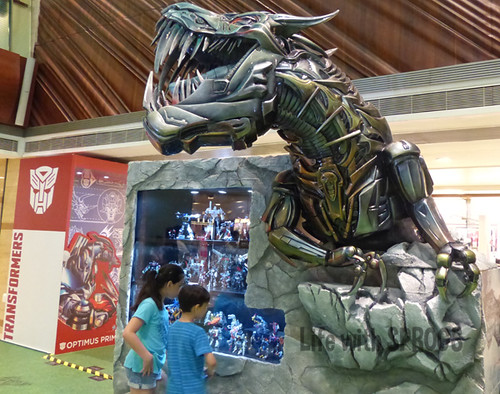 Whilst the Transformers statues were fascinating of themselves, this fascination was amplified by a very nice display of Transformers toys around the statues. My sprogs enjoyed looking at the vast array of characters, some examples recent, some examples classic as they slowly worked their way around each display.

Original toys dating back as far as 1985 were on show. It was a great way for the kids to understand how the toys have evolved over time. How envious am I of the 1985 Optimus Prime! 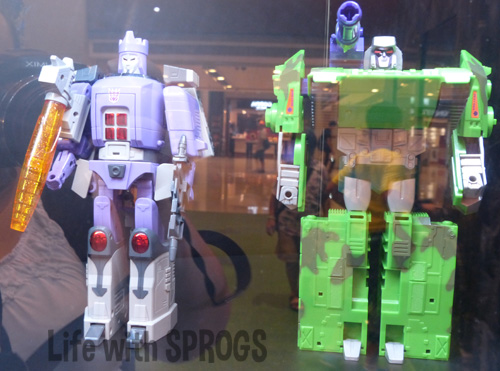 There was a great spread of both Autobots and Decepticons. The figure on the right is what Galvatron used to look like before the Age of Extinction movie. The one on the left is a tank version of Megatron. 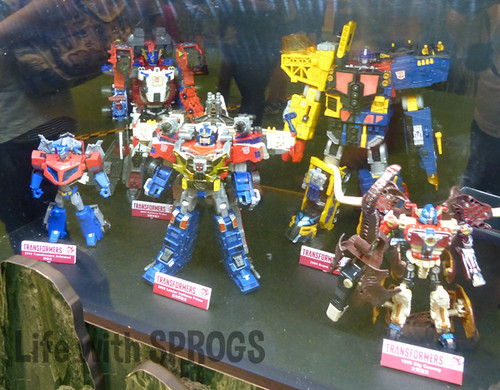 Japanese (as opposed to the American) versions of Optimus Prime (Convoy in Japan) were also proudly displayed. For me this was fascinating as until I moved to Asia I hadn’t even heard of Star Saber or Leo Convoy! These robots are awesome! Not many people know that Transformers are managed by two companies. Hasbro in the USA and Takara Tomy in Japan. After G1 finished, the storylines of their respective Transformers split into different continuities and thus a divergence in their toylines occurred. Living in Asia I am fortunate as Hong Kong gets both the US and the Japanese releases of Transformers to pick and choose from with relative ease. 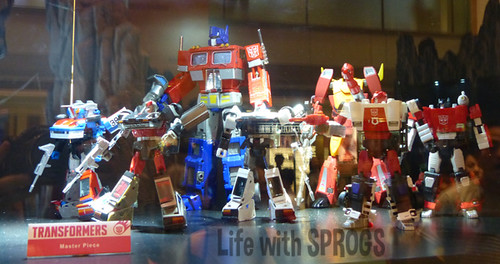 The more recent Masterpiece series was on display. This set of Transformers is gradually being released to celebrate the 30th anniversary of Transformers. I really want to get my hands on a Masterpiece Optimus Prime (MP-10) like the one shown in this set at some point… 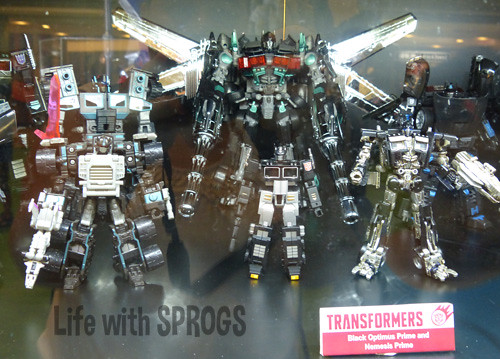 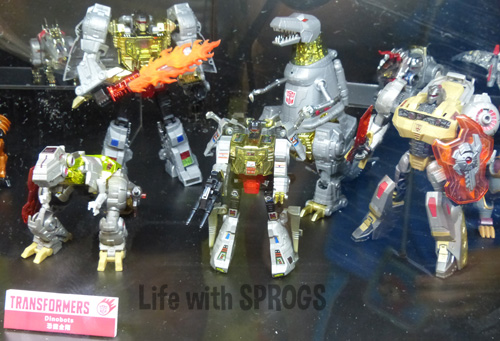 A mini Transformers expo wouldn’t be complete without a display of Dinobots and they were well represented. Grimlock took pride of place with several of his evolutions over time showcased right up to modern day. 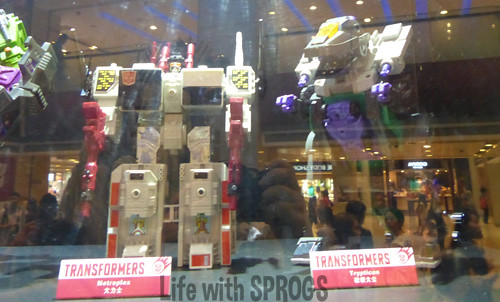 Even the large city-forming Transformers were on hand. My kids had seen Metroplex before but were utterly gobsmacked to see Trypticon (a huge therapod Godzilla looking Transformer who transforms into a Decepticon military base). (Apologies for the poor photo – he was at such an angle it was incredibly hard to get a photo of him) The sprogs have watched the entire G1 series so when they see the lesser used Transformers from that series they get quite excited. 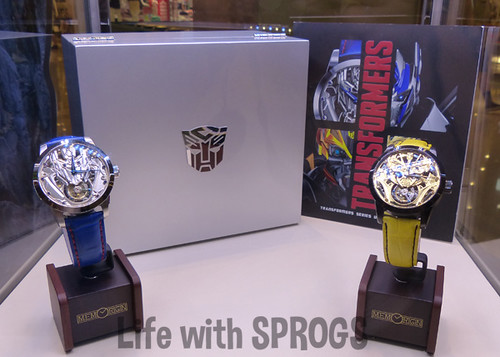 Merchandising for Transformers has skyrocketed with the latest movie release. Want an fine crafted expensive Autobot wrist watch? Well … In Hong Kong you can get one! 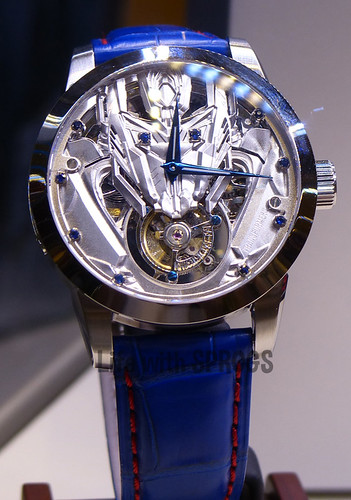 Optimus and Bumblebee from Transformers Age of Extinction have been immortalised in a watch which was also proudly displayed, complete with security guard watching over their little glass booth. Check out the detail on that watch face! 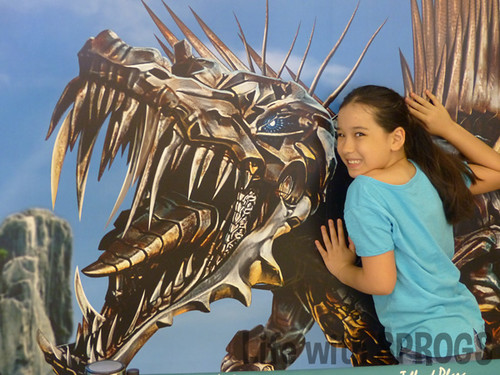 My sprogs loved and appreciated the Transformers displayed at Telford Plaza. Bethany was particularly delighted to find Scorn (her favourite “new” Dinobot) even if he was just a 2D picture. We slowly worked our way around all the displays with the kids engaged in excited conversation regarding various toys on display.

This was like an expresso shot of the Transformers Expo in Macau right here in little old Hong Kong proving that in the last 30 years there really has been more to these toys than meets the eye.

Tip: If you make a minimum spend (I think it was HK$400) on one receipt while at Telford Plaza during the Transformers promotion you may qualify for a free gift. A redemption area is set up near giant Bumblebee in Telford Plaza 2. As I don’t read Chinese I can’t give you the exact specifics as the concierge I asked could only speak limited English. If you are headed over there make sure to check it out.

Telford Plaza is on top of the Kowloon Bay MTR station on the GREEN line and the MTR is definitely one of the easiest ways to get there. Alternatively there is parking at the shopping mall. Buses and Minibuses also go here but you will need to look up numbers for yourself I’m afraid.

The Optimus Prime and Transformers toy mini Expo is in Telford Plaza while giant Bumblebee is is Telford Plaza 2. Optimus isn’t obvious when you walk into Telford Plaza so either ask at the concierge or look for directions towards Godiva Chocolates as Optimus is directly opposite that store.

The Transformers will be on display in Telford Plaza until the 24th of August 2014 so ROLL OUT and see them for yourself!