With two protest sites blocking their tracks, the trams have effectively been stopped from operating their regular services.

Rather than shut down completely, the trams from Causeway Bay to Chai Wan have had to go back into history to get at least some track use out of their trams.

Normally the trams run to the end of their lines and use a turning loop at one of their depot stops. They are always effectively going in one direction with the driver never having to change where he sits. As the turning loops in Causeway Bay and Happy Valley are cut off, manual labour has had to be reinstated with a bit of ingenuity to jury-rig the trams back to “old” technology.

All the trams coming from the East (Chai Wan, Shaukaiwan, North Point) are stopping in front of Victoria Park.

Because in front of Victoria Park is a switch track. As a 2-track system, the trams can come to Victoria Park, stop, switch onto the second track and head back the way they came. This is great as it allows part of the tramways to stay open (and let the tram drivers continue to earn a little of their income) however it requires 3 to 4 tram staff constantly on site to manage the switch and transfer the electrical arm of the tram from one overhead wire to another. 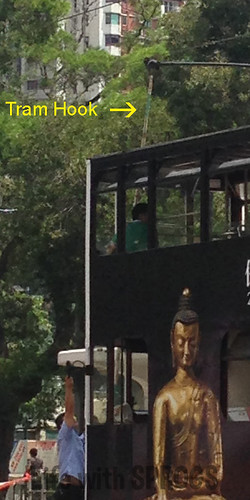 This guy basically has to take a really long hook and grabs onto the electrical arm of the tram. That’s a feat in itself given these trams are double deckers! 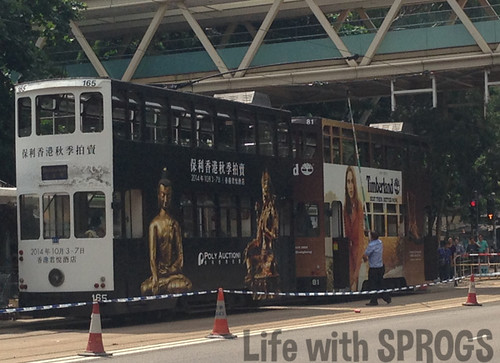 Then he has to swing the arm around toward the other track. 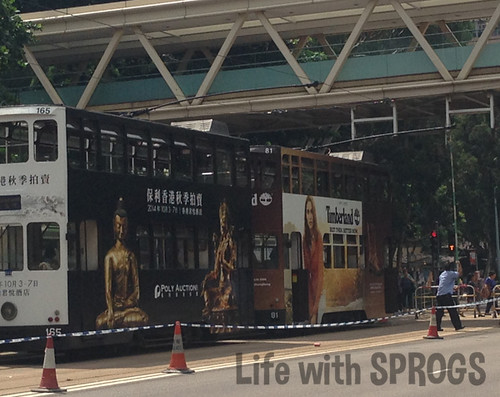 And then attach it to the second track carefully. I can imagine there could be a world of things that could go wrong if you did this the wrong way, especially given you are messing with electrical currents. **BZZZT**

You can see the tram in front has already had it’s arm moved across. After they’re securely in place the tram VERY SLOWLY moves up to the switch line and gradually moves across onto its new track. The electric arm above swivels to be directly above its tram once more and the tram can resume it’s normal service back down the line… sometimes.

As I mentioned before, Hong Kong trams are designed these days to do loops. They go in one direction. The driver never has to change ends and they are no longer designed to operate that way. 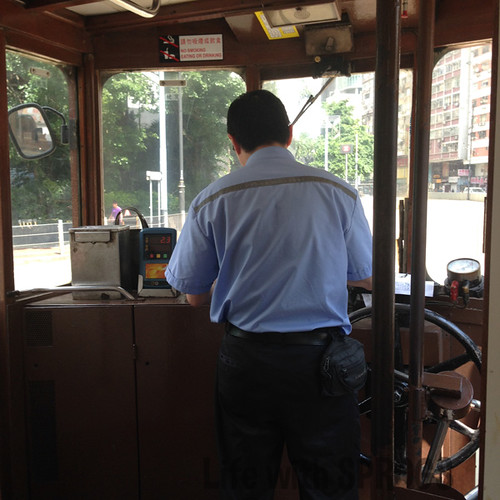 Some of the trams (as in the photo above) can be rigged with devices set up to run at the non-used end (I’m guessing these are the older and legacy trams) while the poor driver is pushed up against the turnstiles and a makeshift coin box and octopus reader are put in operation. Other trams can’t which has lead to a lot of “not in service” trams trundling back down the lines empty (much to the extreme frustration of packed in tram users). It would seem advances in technology are not always useful when unusual situations arise.

Never-the-less I have to applaud the resourcefulness of the tramways for coming up with a method to restore at least some of their much used service to the public.

Every ridden the Hong Kong Trams? What do you think of them?