Do you have people you’d absolutely love to meet one day? I have a short list – I could list them on one hand in fact – of people who inspire, influence and engage me enough that I will try to see or meet them if I can. The unfortunate problem is I live in Asia and most of them rarely leave the continent they live on to attend events where fans can interact with them. So you can imagine my excitement and delight when I found out Peter Cullen was coming over to China… and the knowing rolling of eyes my husband made when I asked if we could go see him.

As we realised this was probably a once in a lifetime opportunity approval was gained and my daughter and I were on our way to Shanghai.

In this post I’m going to talk about the fans and meeting Peter Cullen but I will dedicate another post to the panels he did which were amazing. If you EVER get the chance to hear him speak – GO. He’s incredible to watch live. I’d pay to watch him in a live show – he was THAT good!

I grew up in what I like to refer to as the golden age of cartoons. New Zealand had 2 TV channels only one of which showed children’s shows for about 2.5 hours every weekday afternoon. We didn’t have gadgets to distract us or on demand anything. We’d race home from school to watch our cartoons then do our homework or play outside (or watch the rain falling and WISH we could play outside). Cartoons were an important part of our lives and people like Peter Cullen, Frank Welker, Casey Kasem and Scatman Crothers (just 4 of the incredible voice actors whose shows I adored) allowed kids like myself to have a break from reality even if it was for just an hour or so a day. Of all the cartoons Transformers was probably my “must see” addiction (along with Voltron who Peter also did voices for) and Optimus Prime was my ultimate hero along with his never failing best friend Ironhide. Ironically I didn’t realise Peter voiced BOTH those characters until many years later when I rediscovered my love for Transformers as an adult.

My daughter grew up with Eeyore (voiced by Peter) and then at the age of 4 got HER first Optimus Prime thanks to the movies. She loved Optimus as much as her mum and this was only reinforced when Transformers Prime arrived on the scene and BOTH my children instantly fell in love with the ideals of the characters and the storylines. So Peter Cullen has had an influence on their lives too. Hence the fact my incredibly shy daughter also had a desire to meet one of her “real life” heroes… not to mention she’s fascinated by voice actors and their artform.

And so we made the trek to Shanghai with the prospect of at least seeing Peter Cullen but with the genuine hope we would actually get to meet him.

We queued up on Saturday morning an hour before the convention opened to find 40 people already in front of us which I had anticipated and was actually relieved it wasn’t more. When I found a few people in line who could speak English and asked I discovered everyone was there waiting to try and get tickets to meet Peter Cullen. It peeked my interest as a lot of fans in the western world (especially America) thought it was ridiculous that Peter would come to China as “no one would know him”. Well – that is wrong. I discovered from talking to many of the Chinese fans that he is as much loved in China as he is in the English speaking world.

One guy I met I asked “How do you know who Peter Cullen is?” and his reply?

“I watched the [2007] movie. The first time I heard the voice, Peter’s voice, I was instantly drawn to Transformers and will always watch anything Peter is in.”

“Didn’t you watch it with Chinese voices dubbed over the real ones though?” I asked curiously.

“I wouldn’t even know what a Chinese Optimus Prime sounds like. Most people want to listen to the American voices – the real voices.” he replied.

Well I’ll be damned! I was impressed. Many others had the same story. They fell in love with the voice of Optimus Prime which drew them to the franchise and the characters.

Another fan I met has liked Peter Cullen since he was a small child as his dad watched the English version of the G1 cartoon and Optimus and the Transformers helped him learn English!

Comments like “I will only watch the movie if Peter Cullen and Optimus are there.”, “I love him so much.”, “Peter is the best voice.” – it went on and on as people openly shared what Peter and Optimus meant to them.

I was delighted to see I wasn’t the only one with admiration for a humble voice actor. I loved meeting these like-minded people from a different background, different culture; we all had Peter Cullen in common. 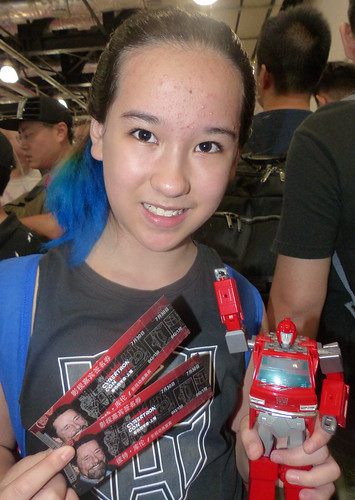 We were able to get two tickets to meet Peter on the Saturday. One for my daughter and one for myself.

An hour before Peter was scheduled to turn up the queue was already long. We were about 25th in line but the line snaked and winded behind us and then around a corner. Barriers were hurriedly being erected to manage the ever growing line. As Peter arrived the line quietened with everyone watching on in excited anticipation. I think we were all (Peter included) overwhelmed by the whole experience. 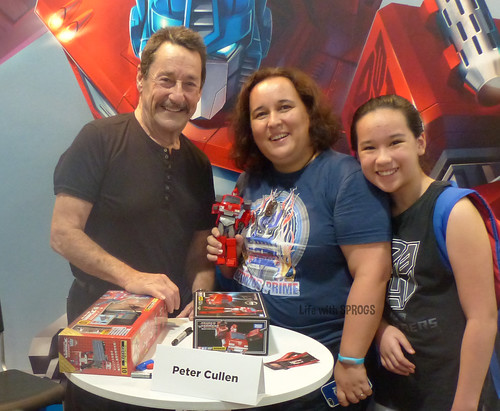 Meeting Peter was very strict. Security surrounded him and staff made it very clear what you couldn’t do or ask for. We walked up, got to say hi to Peter who beamed a smile that could light up the world. We talked briefly  and I thanked him for being MY Prime as well as that of both my children while he autographed our two figures. We posed for photos and bam – ushered out.

It was a brief but amazing experience for both my daughter and I. All too short as there is so much more I wanted to say than “thank you” but the reality is if he spent 5 minutes conversing with everyone he’d be there all week and then some! I imagine it isn’t easy for Peter either as I got the impression he would have liked to converse with his fans too but at the end of the day he was so popular it basically ended up being more of a production line. I’m sure most of us just became a blur to him as he tried to keep up so I feel for him as his popularity must make it hard for him too. 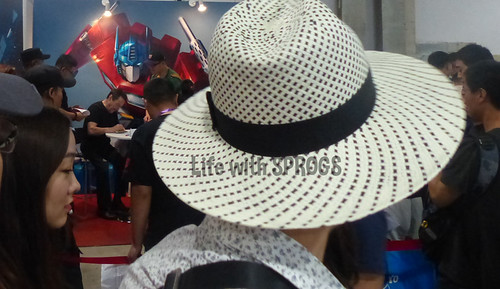 The crowds literally spilled around him, even those who didn’t have tickets just wanted to watch what was going on.

So what did I get signed?

2002 New Year Special Edition Optimus Prime sealed mint in box. He signed it upside down. When I realised he had I laughed. Anyone who knows me know I love unique, quirky and different – and now my prized Optimus is truly as unique and crazy as me and I LOVE it. (And if it’s ever stolen it will be a lot easier to track down!) 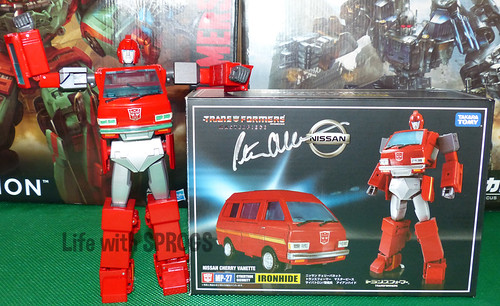 My daughter got Masterpiece Ironhide’s box signed and he looks fabulous. Both figures are actually mine but the deal is my children will inherit one of these each (their idea not mine – haha). These toys and their boxes will not be leaving our family for the next couple of generations. In our eyes they are now priceless family heirlooms.

A fan I had met earlier came past me clutching on to his MP-10 adoringly. He proudly showed it to me with a smile on his face from ear to ear. For him meeting Peter Cullen was magic and he would cherish his autographed Optimus the rest of his life. 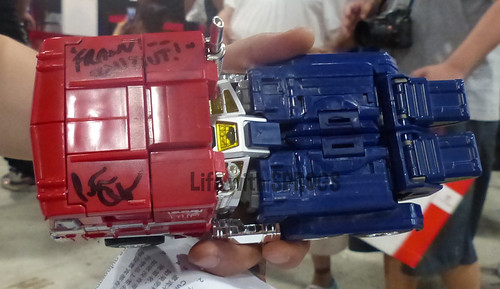 I smiled in delight because I knew EXACTLY how he felt.

Have you ever met Peter Cullen or someone you consider a living legend? Was it “magic” for you?